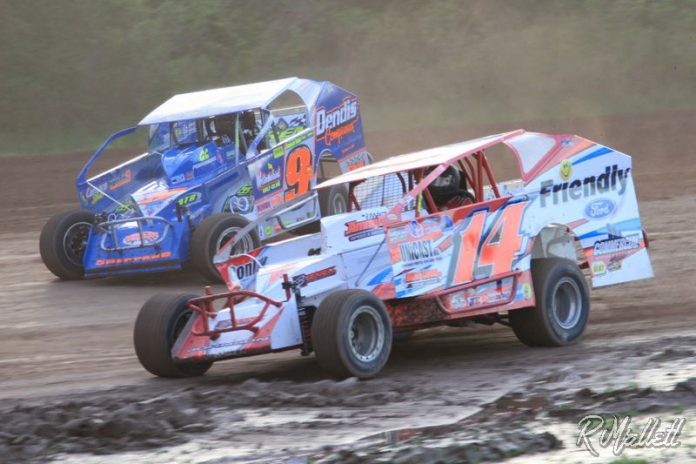 CANANDAIGUA, NY…..Fox’s Auto/DC Rauscher Night at Canandaigua Motorsports Park was another night filled with some intense racing in all of the divisions, and a legendary Modified driver added yet another career win to his total at the conclusion of Saturday night’s 35-lap Modified main.
Dave Rauscher grabbed the lead off turn two of the opening lap of the Modified feature event and pulled out a lead over the rest of the pack.  Alan Johnson was able to break free from the pack and moved in to challenge Rauscher for the lead, taking it at the one-third mark of the event.  Behind Alan, there was intense two and three wide racing between Steve Paine, Matt Sheppard, Erick Rudolph, Dave, Allen, Gary Tomkins, and Justin Haers.  Sheppard eventually grabbed second and began to run down Johnson as the rest continued to scrap for spots in the top five.  Sheppard caught Johnson and for the final fifteen laps they fought hard for the lead in and out of traffic.  Sheppard got close a couple of times in traffic, but Johnson held him off to grab his second Canandaigua win of the year and career win number 120 at the “Land Of Legends”.  Sheppard, Steve Paine, Justin Haers, and Gary Tomkins rounded out the top five in the caution free contest.
James Sweeting and Dave Rauscher won the Modified heats.
Kane Bristol took the lead a couple of laps into the 25-lap Sportsman feature event and started to pull away from the field using the outside lane, but behind him, there action was intense and furious.  Tim Baker and Karl Comfort ran several laps side by side in a battle for second and third with Nick Guererri and Kevin Ridley getting into the mix.  They ran two and sometimes three wide during the middle stages of the contest, swapping spots back and forth.  Ricky Newton came into the mix as well, and Newton found the same high groove as leader Bristol and used it to claw his way to second in the closing laps.  At the finish, Bristol won his first of 2017 at CMP, with Newton, Ridley, Comfort, and Dave Marcuccilli rounding out the top five.
Nick Guererri and Kane Bristol won the Sportsman heats.
Tim Smith and Dan Craun had a hot battle with Jason Whipple at the beginning of the 12-lap 305 Sprint feature until Whipple and Smith made contact on the backstretch on lap 4, which destroyed the front end on Smith’s machine.  Craun and Whipple battled the rest of the race with Whipple making an outside pass of the final turn to grab the win by a car length with Bobby Gardner taking third.
Tim Smith won the 305 Sprint heat.
Marc Minutolo led the opening laps of the 15-lap Street Stock feature until Bob Buono made the pass for the lead on lap 3 and pulled away.  Rick Crego  and Adam Depuy moved into contention at the lap 5 mark as Buono continued to maintain a big lead.  Minutolo dropped out on lap 7 with mechanical issues and it looked like Buono would have an easy drive to the win, but Nick Dandino’s spin on lap 12 bunched the field for a three lap shootout.  Depuy and Crego battled for second with Depuy getting the spot and making a final run at leader Buono off turn four as they came to the checkers, falling a half car length short.  It was Buono’s second win of 2017 at CMP, with Depuy, Crego, CJ Guererri, and Brad Steinruck rounding out the top five.
Marc Minutolo won the Street Stock heat.
The 10-lap New Legends Sportsman feature saw Jeff Lawrence lead until being passed by Ben Karlsen…but then both Lawrence and Karlsen suffered mechanical problems and could not continue, which handed the lead to Jared Rohr, who took it the rest of the distance for his first win in only his second ever race.
Ben Karlsen won the New Legends Sportsman heat race.
Racing at Canandaigua Motorsports Park continues next Saturday night at 7 with a regular race program.  For details, visit www.canandaiguamotorsportspark.com.
RACE SUMMARY-FOX’S AUTO/DC RAUSCHER NIGHT-CANANDAIGUA MOTORSPORTS PARK-JUNE 10, 2017
MODIFIED FEATURE-ALAN JOHNSON, Matt Sheppard, Steve Paine, Justin Haers, Gary Tomkins, Erick Rudolph, Justin Wright, Eldon Payne, Dave Allen, Derrick Podsiadlo, Gil Tegg Jr, Kyle Coffey, James Sweeting, Dave Rauscher, James Maier, Rick Richner, Lance Dusett, Kaitlyn Pashina.
SPORTSMAN FEATURE-KANE BRISTOL, Ricky Newton, Kevin Ridley, Karl Comfort, Dave Marcuccilli, Paul Guererri, Tim Baker, Nick Guererri, Matt Guererri, Anthony Kimble, Austyn Fugle, Nate Peckham.
305 SPRINT FEATURE-JASON WHIPPLE, Dan Craun, Bobby Gardner, Tim Smith.
STREET STOCK FEATURE-BOB BUONO, Adam Depuy, Rick Crego, CJ Guererri, Brad Steinruck, Mike Welch, Dennis Cummings, Nick Dandino, Marc Minutolo.
NEW LEGENDS SPORTSMAN FEATURE-JARED ROHR, Ben Karlsen, Jeff Lawrence, Orville Harris (DNS).