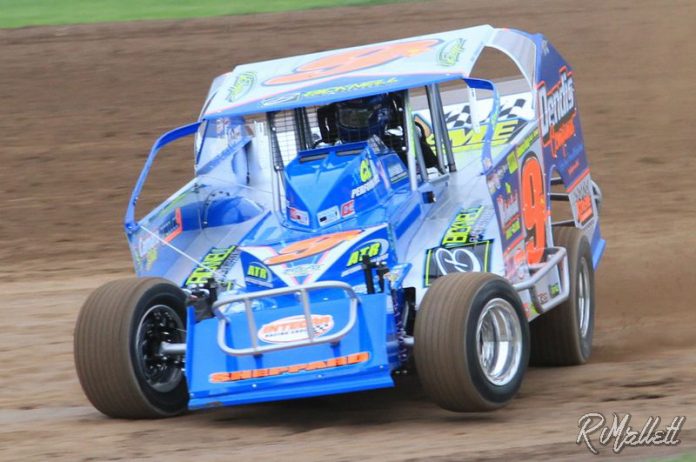 CANANDAIGUA, NY – Coors Light/Admar Supply Night at Canandaigua Motorsports Park featured a new face in Victory Lane, and another dominant performance in the Modifiedfeature by Matt Sheppard, who claimed his third win of the season.Kyle Coffey and Dave Rausher battled for the early lead in the 35-lap Modified contest, with Coffey locking down the top spot as Rauscher fell into a battle with Sheppard and Justin Haers.  Steve Paine was also in the battle early but jumped the cushion in turn four and fell further back in the top ten.  Sheppard moved into second on lap 10 as Alan Johnson started to close in on the leaders.  As Sheppard built up a several second lead, Johnson moved into the second spot, gapping out on Haers, who had settled into the third position.  Sheppard’s car was amazingly fast, and he moved through traffic with ease, lapping into the top ten by lap 25 and eventually lapping up to fourth place when the checkers fell.  Haers closed on Johnson late in the race as they worked lapped traffic, but Johnson was able to hold him off for second.  Paine rallied from the early issue to come back through the field to take fourth, with Justin Wright passing Kyle Coffey in the closing laps for fifth.Kyle Coffey and Dave Ruscher won the Modified heats.Austyn Fugle led the field into turn one at the start of the 25-lap Sportsman feature event, but Nick Guererri was able to snatch the lead away a couple of laps later.  As Guererri built up a big lead as Kevin Ridley and Dave Marcuccilli battled with Paul Guererri and Karl Comfort.  Through the middle stages of the race, Nick was uncontested for the lead, but the battles for second, third, fourth, and fifth remained side by side.  The race’s lone yellow flew on lap 22 and put Ridley on Guererri’s back bumper for the run to the finish.  Guererri was up to the task, taking his first win of the season over Ridley, Marcuccilli, Paul Guerreri, and Comfort.Paul Guererri and Karl Comfort won the Sportsman heats.In the 12-lap 305 Sprint feature, Lee Sanders and Jason Whipple dueled for the lead until Whipple went way high in turn four a couple of laps in.  Sanders avoided the spinning car of Bobby Gardner in turn four and on the restart with three to go again jumped out front to take the victory over Whipple, Dan Carun, and Bobby Gardner.Lee Sanders won the 305 Sprint heat race.Nick Dandino led the opening lap of the 15-lap Street Stock feature and was passed by Marc Minutolo on lap 2 for the top spot.  Bob Buono moved into second and Adam Depuy slotted into third.  Buono grabbed the lead on a lap 5 restart, but surrendered it to Depuy three laps later.  Depuy pulled away in the final laps and looked like he had the race sewn up until Dakota Sharp’s car slowed on the frontstretch on lap 13, bunching the field for a two lap shootout.  Minutolo and CJ Guererri got together on the restart, with Guererri getting a flat tire and Minutolo losing the front end bodywork, which ended the race for both competitors.  Marc Minutolo and Mike Welch won the Street Stock heats.Next Saturday night, June 24th, is a special night for Canandaigua Motorsports Park as it will be ‘Gary Montgomery Tribute Night’, celebrating the life and the history of one of the “Land Of Legends” longtime announcers and motorsports personalities, Gary Montgomery.


Modifieds, Sportsman, 305 Sprints, Street Stocks, and New Legends will make up the race card, which gets underway at 7:00 p.m.  On Thursday, June 29th, Canandaigua Motorsports Park will host a round of the Lucas Oil Empire Super