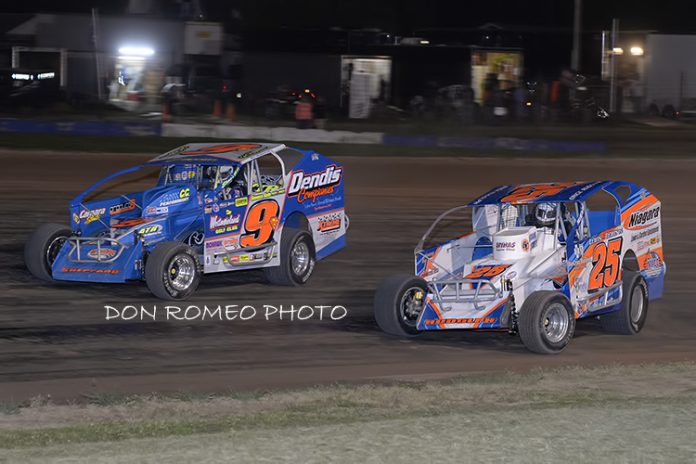 CANANDAIGUA, NY – Even though skies were cloudy all day, rain never materialized before race time at Canandaigua Motorsports Park and the sun broke through during hot laps at the “The Land Of Legends.”  Matt Sheppard saw the skies part for him in the early laps of the Modified feature, from there Sheppard checked out to score yet another CMP win.

The 40-lap feature began with Erick Rudolph and Matt Sheppard battling for the top spot, with Rudolph settling into second on lap 2 as Sheppard pulled away. Justin Haers and Alan Johnson were able to move into third and fourth as Sheppard hit traffic at lap 10. Sheppard extended his lead in traffic as Haers tried to use the traffic to catch Rudolph.

Further behind them, Johnson and Steve Paine were fighting for spots in the top five. Tim McCreadie and Rob Bellinger raced side by side for several laps as the race progressed, but it seemed as though nothing was going to stop Sheppard. The only yellow flag of the feature flew on lap 35 when Steve Paine’s car slowed in turn two, which bunched the field.

On the restart, Sheppard motored away as Haers and Johnson fought for third. At the finish, Sheppard had his fourth Modified win of the season at CMP, with Rudolph, Haers, Johnson, and Gil Tegg Jr. completing the top five.

and Street Stocks will be joined by a Youth Demo Derby. Racing starts at 7pm. For more information visit the web site at