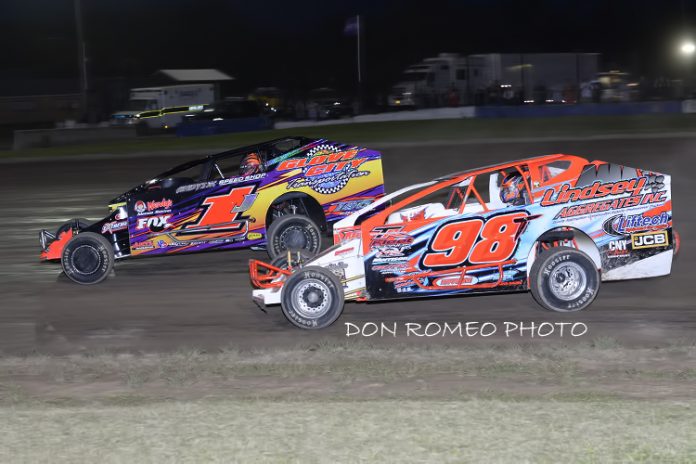 Tyler Thompson and Warner brought the 21-car starting field to the green, with Warner launching off the top side to take command early. Thompson, a sophomore in the Sportsman division, hung with the experienced veteran, remaining side-by-side with Warner for the opening three laps, but then fell in line behind Warner. Kyle Inman snatched second away from Thompson just two laps later, with Matt Guerreri pushing Thompson back to fourth with nine laps in the books.

By halfway, Rocky Warner had opened up a large lead of a full straightaway over Inman, Guerreri, Kevin Root, and Kevin Ridley. Warner, fresh off a 20th to third run the previous night at Can-Am Motorsporsts Park, had checked out into another zip code, while Inman found himself rather isolated in the runner up-spot during the middle stages of the event. However, Guerreri, Root, and Ridley waged war for third, with Guerreri holding down the fort for the time being.

Throughout the remainder of the event, Warner remained unchallenged, cruising to the win in the green-to-checkers feature. Inman had backed up to Guerreri in the later stages, but held on to finish second. The aforementioned Guerreri crossed in third, with Root following in fourth. Kevin Ridley had contact with a lapped car on the last lap, and surrendered fifth to Dave Marcuccilli at the finish. Ridley, Nick Guerreri, Tyler Thompson, Paul Guerreri, and Kane Bristol completed the top ten.

“I was kind of concerned running where we were out front like that, you just don’t know where the fast lane is,” Warner stated in his victory interview. “You might think the bottom is the place to be, and someone blasts by you up top and suddenly you’re in second. Going green to checkered definitely helped, and to beat (Dave) Marcuccilli at his playground means a lot, even though he started 12th and with us on the outside pole.”