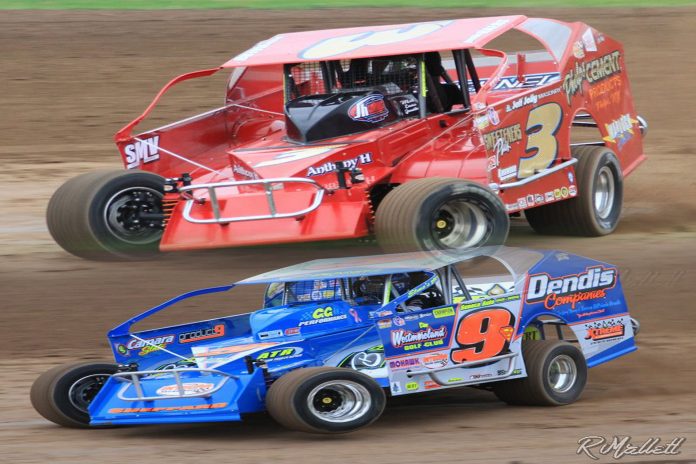 CANANDAIGUA, NY – The season finale at Canandaigua Motorsports Park saw the 2017 track championships decided with double points for all divisions and the makeup of the Modified feature from August 18th that was held over due to rain.

The heldover Modified feature began on lap 9 with Matt Sheppard holding the lead.  Alan Johnson and Justin Haers moved to second and third by halfway, but Sheppard had built up a big lead at that point.  Haers motored by Johnson on lap 19 to take second.  Sheppard lapped well into the top ten by the finish, recording the win and adding to his point lead
going into the regular portion of the night’s program.  The rest of the top five behind Haers and Johnson was filled by Greg Birosh and Derrick Podsiadlo.

In the regularly scheduled 40-lap Modified feature, Dave Allen battled Lance Dusett for the early lead but it didn’t take long for Alan Johnson, Justin Haers, and Matt Sheppard to tear through the pack and into the top five.  Sheppard blasted into the lead on lap 7, with Haers following suit into second one lap later.  Alan Johnson moved past Dusett for third as Haers ran down Sheppard in traffic, making a pass for the lead on lap 15 and pullling out an advantage.  Haers’ lead was erased when Dusett lost power and stopped on lap 24.  When the green flew again, Haers and Sheppard spent the rest of the feature battling for the lead, with Haers holding off Sheppard’s repeated challenges to take the win.  Johnson, Erick Rudolph, and Steve Paine rounded out the top five.

The points ended in a tie between Sheppard and Haers, and Sheppard earned the championship via the tie breaker, which was the number of feature wins in the season.

Modified heats were won by Eldon Payne and Justin Haers.

The 25-lap Sportsman feature event saw Tim Baker and Ricky Newton battle for the early lead, but on a lap 4 restart, Kevin Ridley shot from fourth position into the lead.  As Ridley gained an advantage, Newton fell back momentarily behind Baker as Paul Guererri and Dave Marcuccilli, who were in the track championship battle with Ridley, were working their way into the top five.  In the middle stages of the feature, Newton used the outside lane to reel in Ridley and made the pass to take the lead on lap 17.  Newton pulled away for the win over Ridley, Kane Bristol, Dave Marcuccilli, and Tim Baker.

Marcuccilli’s finish netted him the track championship by just 3 points over Ridley.

In the 12-lap 305 Sprint car feature, Dave Ferguson took the early lead from Tim Smith as Jason Whipple tried to move in

from third.  Whipple slapped the wall on lap 3 and went to the pits, rejoining at the rear of the field, but on the restart made contact with a spinning Bobby Gardner, who went upside down.  Smith took the lead on the restart as Dan Bennett moved in to challenge Ferguson for second.  Smith held off Ferguson’s challenges at the end to take the win, with Dan Bennett, Andy Jacobus, and Brandyn Griffin rounding out the top five.

The 305 Sprint car heat was won by Dave Ferguson.

The 15-lap Street Stock feature event began with Adam Depuy coming from fourth to first in the first lap as Rick Crego and Bob Buono battled for position.  Depuy held off Buono at the finish for the win, with Buono penalized after the race, putting him to the tail of the lead lap.  Rick Crego, Marc Minutolo, and Brad Steinruck rounded out the top five.

The Street Stock heat race was won by Adam Depuy.