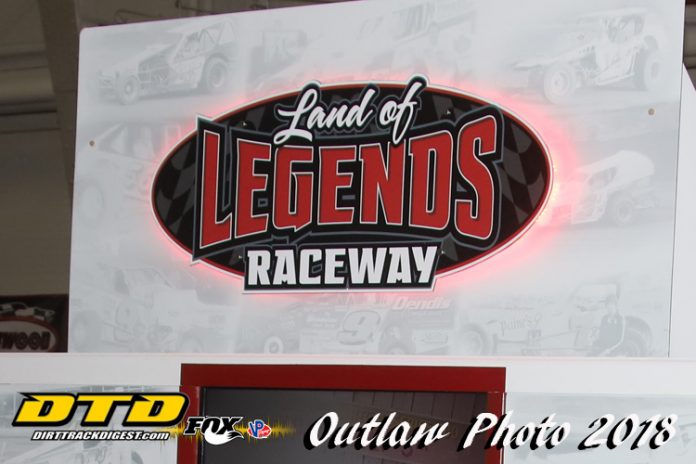 In addition to the name change, the Land of Legends Raceway in Canandaigua, N.Y., is adding another batch of upgrades to their ever-expanding list of changes for the upcoming race season.

A slew of new series sponsors have come on board this year, starting back in January with the announcement of Mike Emhof Motorsports’ partnership with the track’s 305 Sprint Car class. Emhof has been a longtime owner of the Patriot Sprint Tour.

At the end of February, the track closed a deal with Geneva Club Beverage as the title sponsor for the big-block Modifieds. Dobber’s Sports Bar & Grill and A-Verdi Office & Storage Containers also joined as track sponsors.

On Sunday, Land of Legends received yet another major sponsorship with Tradition Automotive Group, who will supply the track with their official safety vehicle and a headlining sponsorship deal on Aug. 4 when the Super DIRTcar Series and Empire Super Sprints come into town.


At the helm of SuperGen Products and a familiar sponsor of the CSRA 305 Sprint Series, Patriot Sprint Tour and GRIT Sportsman Series, new track promoter Paul Cole is well-versed in advertising and the effects it can have on the community as well as the incoming sponsorships that will fund track operations.

“I’ve been doing a lot of promoting and discussing with advertisers [about] how we’re going to market to them,” Cole said. “We have a large number of sponsors that have been around the track for a while and some of them are coming back.”

Announced back in September 2017 there will once again be Super DIRTcar Series racing action in Canandaigua. Land of Legends will play host to the renown big-block Modified series on July 5 for 100 laps, as part of the Independence Day-week festivities.

“That Super Dirt Series race is something that both the fans, in fact, the fair board when they asked me if I was interested in promoting, they wanted it back too,” Cole said.

Cole said the staff is also working on getting multiple new track and facility upgrades installed in time for the first race on April 14, which includes new LED track lights, a new scoreboard and a new 9-by-16 Jumbotron. Additionally, the pit area will be expanded by 1.3 acres to accommodate the new and returning race teams.

The main concession stands will be open for everyone to get the standard hamburgers and hot dogs, but Cole said the track is also working out deals to get new food trucks to appear in the concession area with all different types of good eats, aside from the regular racetrack foods.

All of these new changes started back in September of last year, when the new management team was announced along with the new track ownership. Working with Cole as Director of Operations, Greg Emerson will manage the “marketing, public relations, ticketing, sponsorship and promotional aspects of the Land of Legends Raceway,” according to the track’s Facebook page.

In addition, Greg Hixson has been appointed to the Director of Racing position and, according to the track’s Facebook page, will take care of “management of the on-track program, scheduling, safety crews, officials, tech and other racing concerns.

“Both of them are veterans of Canandaigua, but also veterans of racing all over the area,” Cole said.

Overall, Cole and the rest of the Land of Legends staff are looking forward to seeing the improvements from years past and the many positive things they can bring into the future, not only to the drivers and crews, but to the fans and the community as well. He said the racing might not be the most anticipated thing on everybody’s list when they come out to spend an evening at the track, but it is the enjoyment of being with friends and family that makes it all worthwhile.

“We’re not only trying to go from years past, we’re trying to look at the years forward,” Cole said. “We’re really looking to make this the destination where people want to have a good time at night.”