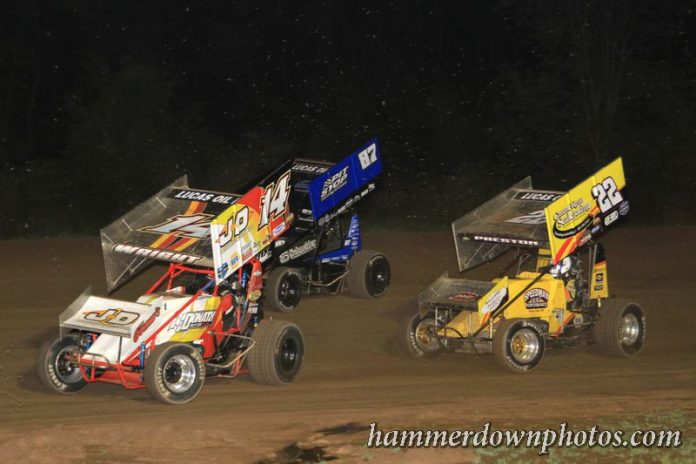 CANANAIGUA, NY – A prolific supporter of both the CRSA 305 Sprint Series and Patriot Sprint Tour in past seasons, new Land of Legends Raceway promoter Paul Cole has provided yet another monetary boost for winged warriors invading Ontario County in 2018.

“The Land of Legends has established a solid reputation in sprint car racing over the years and offering this type of point fund further emphasizes our effort to grow the division,” remarked Cole, who in January inked Mike Emhof Motorsports as the title sponsor of Canandaigua’s weekly 305 sprint car class to reveal his intentions from the start. “The 305s are a good feeder class for the 360s, they naturally go hand-in-hand so investing in both groups will help out everybody in the long run.”

A-Verdi Storage Containers presents round #1 of the LOLR 360 Sprint Classic Series on May 5, with top touring Patriot pilots headlining the first ‘Saturday Spectacular’ in the first full month of short-track competition in Canandaigua. Patriots also close out the four-race stint alongside GRIT Sportsman contenders in the final mid-week show of the season on Wed. August 29.

In between, the stars and cars from the Empire Super Sprint organization are showcased during the second and third series stops at the fairgrounds. ESS doubles with the mighty Big-Block Modifieds when Honeoye Auto Parts presents a Super DIRTcar Series showdown on Thr., July 5 before returning on Aug. 4 in another ‘Saturday Spectacular’ sponsored by Tradition Chevrolet/GMC.

Race teams can enter the pits at 4:00 then join a 5:45 driver’s meeting before cars in the first warm-up session roll onto the track at 6 p.m. Grandstand gates swing open at 5 p.m. and the first qualifying heat starts promptly at 7 o’clock.

Advance sale tickets for all events are available for purchase online by first logging into www.LandOfLegendsRaceway.com, then hitting the red “Buy Tickets” button on the homepage and making a selection from the list of shows highlighted.