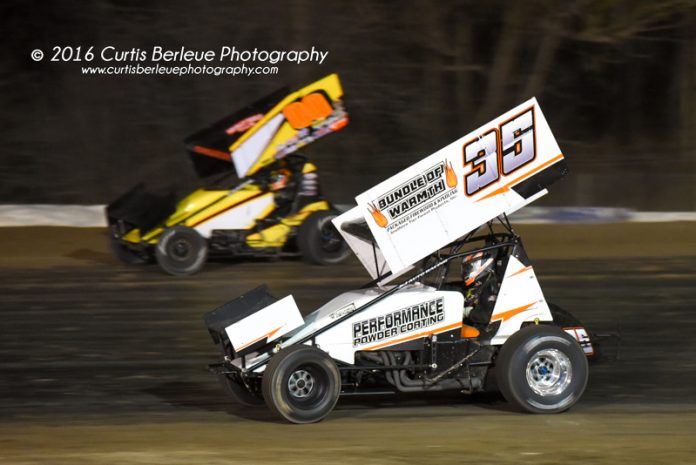 SODUS, NY – After a cold and wet start to the season, the A-Verdi Storage Containers Patriot Sprint Tour will finally get on track this coming weekend at the newly re-named Land of Legends Raceway (formerly Canandaigua Motorsports Park) in Canandaigua, NY.

Mother Nature has been leading the win count across all forms of motorsports thus far in 2018, and it has been no different with the Patriot Sprint Tour. The first scheduled events for the PST were Friday April 20th and Saturday April 21st at Outlaw and Merrittville Speedways respectively. Fridays show at Outlaw first fell victim to weather and was moved to their scheduled rain date of Saturday. Merrittville was then forced to postpone Saturdays show, their annual ‘Spring Sizzler’ because of weather also.

Since the Outlaw Speedway event for Friday April 21st was originally on the PST schedule, a cash bonus was distributed to the top 3 finishing PST member drivers that supported the event even though no points were awarded. Coincidently, the top 3 finishers in the A-Main (Jason Barney, Matt Tanner and 2017 Canadian Champion Dylan Westbrook) were all full PST members and thus received the bonus money.

This coming Saturdays event at the Land of Legends Raceway pays $2,000 to win and is presented by A-Verdi Storage containers. This will be a full-point Patriot Sprint Tour event. The last time the Patriots visited the Ontario County oval was in 2016. Steve Poirier picked up the victory over Bryan Howland and Jason Barney.

It will also be the first of four 360 sprint car events at the Land of Legends in 2018. Drivers competing in all four events will be eligible for a $4,000 point fund posted SuperGen Products/Champion Power Equipment.

Sprint car teams wishing to arrive early on Saturday may do so and will be allowed to park and unload their haulers starting in the early afternoon. The pits will be swept at 3:45pm, and gates re-opened at 4pm. A drivers meeting will be held at 5:10pm followed by heat in the engines at 5:30pm and racing at 7pm.

General admission this Saturday is $20 for adults and $40 for pit entrance. A full list of prices, schedule of events and competitor information for this weekends event can be found by navigating to www.patriotsprinttour.com and www.landoflegendsraceway.com