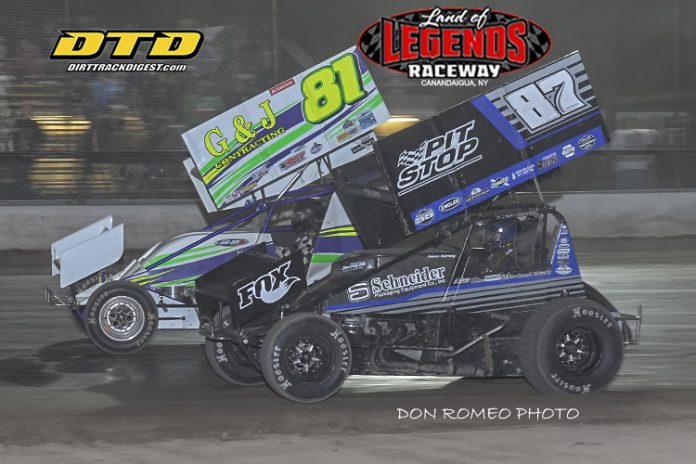 CANANDAIGUA, NY –  Jason Barney is certainly enjoying the spring of 2018. After a win at Outlaw and a second at Fulton, Barney kept his hot streak alive with a dominating victory at the Land of Legends Raceway with the Patriot Sprint Tour.

“I don’t know if this car could be any better,” Barney said. “I was disappointed last weekend when we ran second, but I’m just so grateful to be in this race-car and with this race team. When we got to the lead, we were rolling pretty good and I just had to keep doing what I was doing.”

Canandaigua local Chuck Hebing took off like a rocket at the start of the 25-lap Patriot Sprint Tour main, establishing a near-straightaway lead over Bryan Howland in the opening pair of laps. Hebing motored away before Scott Goodrich tipped onto his side on lap five, giving Howland and Barney a second chance at the No 45.

On the restart, Hebing was able to jump out to a nice lead, but not as big as before. Howland, who intended on retiring at the end of 2017, surrendered second to Barney, who then went to work on Hebing. Barney drew even with Hebing on lap nine, then completed the pass the next time around. From there, Barney took off, piling up a full straightaway lead by halfway.


Barney’s lead only extended from there. Working lapped traffic masterfully, the lead grew to near half a lap. With four laps left, Hebing collided with a lapped car, knocking the left front shock and torsion bar clean off the car. Despite riding on the frame on that corner of the car, Hebing kept second for the moment. However, only for the moment, as Howland snuck around to reclaim second with two laps left.

It was clear nobody was giving Barney hand signals during the race, as he was worried about losing the lead when in all reality the lead was nearly half a lap.

“When I caught lapped traffic, I really started stalling. I was thinking ‘here you go you big dummy,’ and I was just waiting for Hebing or someone to roll on by. I started playing too much defense, trying to cover too much racetrack. I was glad to see that checkered flag.”

All that drama took place well behind Barney, as the Brewerton, N.Y., driver cruised to the win in dominating fashion. Bryan Howland claimed second over the damaged Hebing, with Steve Poirier and Dylan Westbrook completing the top five.