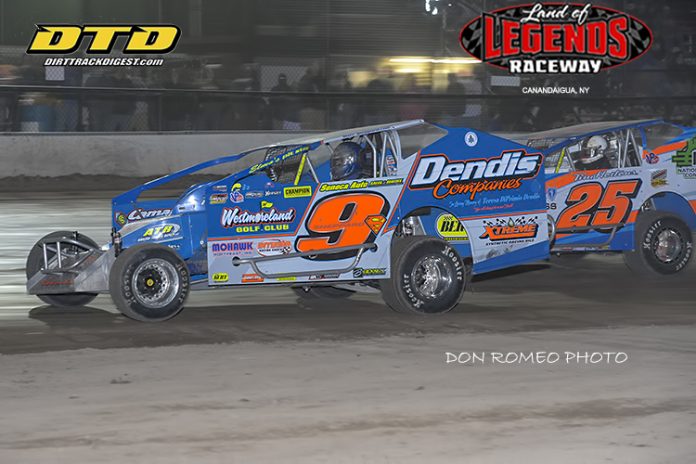 CANANDAIGUA, NY – Matt Sheppard claimed his fifth opening night win at the Land of Legends Raceway, dominating the Modified event for his second win of the weekend beating out Erick Rudolph.

“It’s not any easier starting fourth than 18th, there’s a good bunch of guys here and you definitely can’t take any nights off,” said Sheppard in victory lane. “We were really good tonight, and fortunately we were able to get out front before Erick was.”

Steve Paine took command when the green flag flew to start the 35-lap Land of Legends Raceway opener. After a quick battle in the opening laps, defending champion Matt Sheppard skated around Jimmy Phelps for second, then quickly went on attack against Paine. Rolling the middle of the speedway to perfection, Sheppard drove by Paine for the lead just four laps in.

Rudolph ran the same line Sheppard used to pass Phelps, and then went to work on Paine for second. As Rudolph was making the pass, Brian Sage spun to draw the yellow with 11 laps complete. However, the pass stuck and he got to line up alongside Sheppard.


Rudolph stayed within striking distance, but that was all he could do at the time. Another caution on lap 17 for James Maier’s blown tire gave him another shot, but it was more of the same from the top two. Behind them was a mad scramble for about fifth that ultimately resulted in Peter Britten drawing a caution with a broken left front shock on lap 20.

This final restart saw Rudolph be able to stick just a little closer than before to Sheppard. The laps ticked off, and Sheppard seemed to be slowly putting distance between himself and Rudolph. As the five to go signal was shown to the field, the tide seemed to change and Rudolph now appeared to be the faster car. At the same time, the two leaders entered traffic, allowing Rudolph to draw within four car lengths of the leader in a couple of turns.

That was as close as Rudolph would get, as Sheppard crosses under the double checkered flags first for the first Big-Block Modified win under the Land of Legends Raceway banner. Rudolph chased, with Steve Paine, Jimmy Phelps, and Billy Dunn rounding out the top five.

Sheppard has lots of wins at this track. All of them up until tonight say Canandaigua, but this trophy will bear a new name.

“It’s a new era at the Land of Legends, and to start it off in victory lane is pretty cool,” Sheppard noted. “Congrats to Paul (Cole) and all his staff, a great night of racing tonight and I haven’t seen many opening nights for new management go as smoothly as tonight did.”