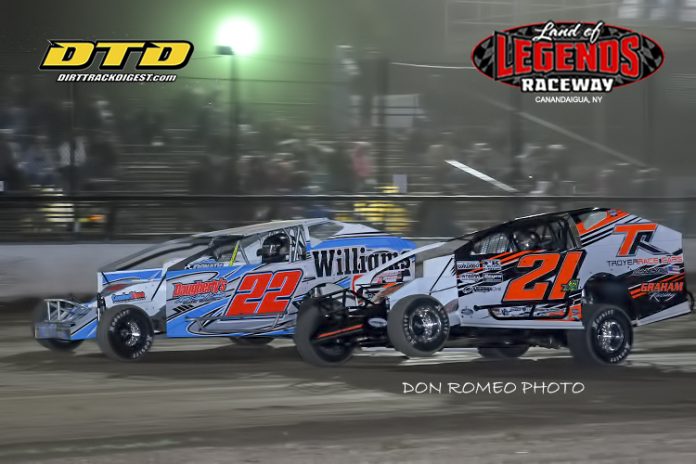 Long-time Spencerport (NY) resident Troyer, who founded Troyer Engineering outside Rochester in 1977, passed away Thursday (May 10) at age 79 following a long illness. Himself a trusted Troyer Race Cars parts distributor near his home in Brisbane, Queensland, Australia, Britten has scored all four of his Pepsi Big-Block Modified wins at LOLR in a Troyer ride since crossing the globe in 2010.

“You really gotta believe in some kind of karma after this weekend,” remarked Britten, 30, who also won Friday at Albany-Saratoga Speedway in New York State’s capital region, that Troyer entry numbered 97 and owned by one-time Canandaigua regular Andy Romano. “Maynard and my dad are probably having a beer together upstairs enjoying this one.”


Reigning track points king Adam DePuy from Macedon made it two straight in the Big Dog Country Street Stock ranks with 2nd-generation driver Billy Paine in from Waterloo adding his name to Land of Legends lore after his first-ever New Legends Sportsman win.

The Saturday Spectacular was just that as action heroes “Batman” Britten and “Iceman” Gray once again returned to victory lane at promoter Paul Cole’s revamped Ontario County Fairgrounds half-mile clay oval. Although each had been atop the podium before, they rode different routes on this night to take top dollar in their respective Modified divisions.

Britten led flag-to-flag in the 35-lap Big-Block main while Gray finally chased down race-long leader Kevin Ridley with less than two to go in the 25-lap Sportsman feature.

“The car felt good and fast tonight but you just never know what’s coming behind you,” noted Britten, who won the first of three qualifying heats before taking off from his pole-position start in the feature. A broken shock tower ended his chances on lap 21 the week prior to handicap him on the front-row in round two. “And starting up front you have to find the fast lane yourself as you aren’t able to watch what any of the guys are doing ahead of you.”

While Britten opened a comfortable advantage a third of the way through, top-7 bumper-to-bumper battles attracted the most attention between Wright and Phelps, Justin Haers and McLaughlin, and all-time track winner Alan Johnson and defending track champion Matt Sheppard. Phelps finally secured the runner-up slot on lap 19 and pulled to within three car-lengths of the leader with 10 to go yet Britten successfully navigated his way through traffic to win by a half-straightaway.

“Winning twice on a weekend is good anytime, anywhere. There were two strong fields out there with a lot of talented drivers so to come out on top is very satisfying. Maybe Billy (Colton) should go away more often,” joked Britten, alluding to the Troyer Race Cars owner who is currenty vacationing in the land downunder some 30 hours away.

Haers moved into the show position as Phelps set his sights on Britten in the latter stages. Fifteenth starter Sheppard slipped past McLaughlin with eight laps left to solidify the front-five the rest of the way as Wright, Billy Dunn, Erick Rudolph, Johnson and Gil Tegg Jr. completed the top-10 at the line.

While Britten notched all three of his previous LOLR victories in 2016, Gray’s last checkered flag came in 2014, the same season he logged seven feature wins to lock up the Sportsman points title.

“Yes, its been a long time coming,” said a choked up Gray on the heels of his dramatic come from behind win in wine country. “Can’t thank everybody enough that has helped get us back. Bob Proctor and his family, a lot of people never gave up.”

Similar to Britten, mechanical woes sidelined Kevin Ridley last Saturday to put him on the point this week to begin the headline 25-lapper. With steering issues out of the way, Ridley opened up a commanding straightaway advantage after 10 laps, leaving Anthony Kimball, Ricky Newton, Loren Lincoln and 12th-place starter Gray to dice for top-five positions early on.

While Ridley was forced to dodge traffic before the halfway mark, Gray was methodically picking off his rivals one by one to move up the leaderboard. His no. 29g Proctor Enterprises-Bussey Painting & Refinishing/Teo mount sped into fourth past Lincoln on lap 11 then ducked under Newton two laps later to take over third and grabbed second from Kimball on lap 16.

Ridley was still solidly out front until Newton broke in turn two to force out just the second yellow flag, the first thrown on lap two for debris on the homestretch. With a huge lead suddenly erased and Gray restarting nose-to-tail on lap 20, Ridley was able to stave off challenges by Gray the initial four laps before relinquishing the top spot with the white flag in the air.

“The car was really coming together the last 10 laps,” beamed Gray, after taking his 28th career Sportsman checkered flag at LOLR, standing second all-time between Paul Guererri (43) and Ridley (25). “At the end I kept showing him my nose and finally just crowded him low to get by. Its all I could do.”

While superb track conditions afforded the Modified divisions to run near caution-free feature races, 305 Sprint Car winner Griffin was nearly three circuits away from a non-stop 20-lap A-Main milestone when the winged machine of Tyler Cartier stopped in turn two. Instead, a seemingly insurmountable advantage for the no. 75 Tri-County Excavating-Ruggles World of Auto Body-Speed Connection/Eagle quickly vanished and set up a four-lap dash between Griffin and female flash Alysha Bay in her potent pink machine.

Back under green Bay continued to shadow the leader, looking for a fast way past both high and low. Full throttle down exiting the fourth and final turn, Bay peeked low at the line only to fall a car-length shy, giving Griffin a memorable win in the closest feature of the night.

“Seemed to be running out front for so long, just hoping somebody wasn’t faster than me out there tonight,” said Griffin, who overtook pole-sitter John Trenca for the top spot on lap four and was never threatened until the late-race caution tightened the 17-car field. “Saw (Alysha) a couple times near the end, fortunately I was able to hold her off long enough when it counted. She’s a good racer here, already has a few wins so I’m glad to get my first.”

The 15-lap Big Dog Country Street Stock feature had the same outcome as season-opening Saturday last week, only this time it took DePuy four laps to gain control before romping home for another convincing victory, the 32nd of his career in Ontario County.

“The track hasn’t been this tacky for years, not sure what the grounds crew is doing but I hope they keep it up,” said DePuy, who led the distance from his pole-position start a week ago. After filing in seventh on the 11-car grid this time, the ’17 points champ put his sleek no. 99 Nance’s Mustard-A.E.Y. Enterprises/Chevrolet Camaro under Mike Welch exiting turn two and cruised home for a half straightaway win. Marc Minutolo crossed the line second on both occasions.

“Last week it was somewhat tacky but tonight its sticky just about everyhere. The car could run both high and low, really anywhere I wanted to put it. When its like this its really a lot of fun to get around,” added DePuy, who scored his first full-fender victory in 2002 and has been winning ever since.

Minutolo started sixth and grabbed second from Welch on lap seven. Despite the leader reaching traffic on lap eight, Minutolo was unable to close the gap and collected runner-up laurels ahead of Welch with Rick Crego and Blane Smith posting top-five finishes in the caution-free six-minute main.

Waterloo H.S. sophomore Paine had no problem improving from his runner-up finish in the May 5 opener that was shortened to eight laps, this week leading all 12 laps to garner his first New Legends Sportsman win.

“Homework still comes first then I can work on the car,” smiled Paine, 16, who was joined in Crosman Airguns victory lane by his proud parents, including father Steve, the record-setting 11-time Big-Block track points champ with 93 career feature wins at the Land of Legends.

Land of Legends Raceway will be showcased in the Empire State when the recent May 5 Patriot Sprint Tour event is aired on CW-23 in Buffalo at 2 p.m. on Sat., June 16, CBS-5 in Syracuse at 7:30 a.m. on Sun., June 17 and on CW-16 in Rochester at 10:30 a.m. on Sun., June 17. The hour-long production is part of ‘Speedway Showcase’ hosted by Rich Vleck with race analysis provided by Doug Elkins and pit reporting from Paul Szmal.

As the first full month of racing continues at LOLR, be sure to follow the point standings and breaking news online by visiting www.LandOfLegendsRaceway.com. Advance sale tickets are also available for purchase online throughout the upcoming months. Log into the website (LandOfLegendsRaceway.com), hit the red “Buy Tickets” button on the homepage, then make a selection from the list of dates & events highlighted.