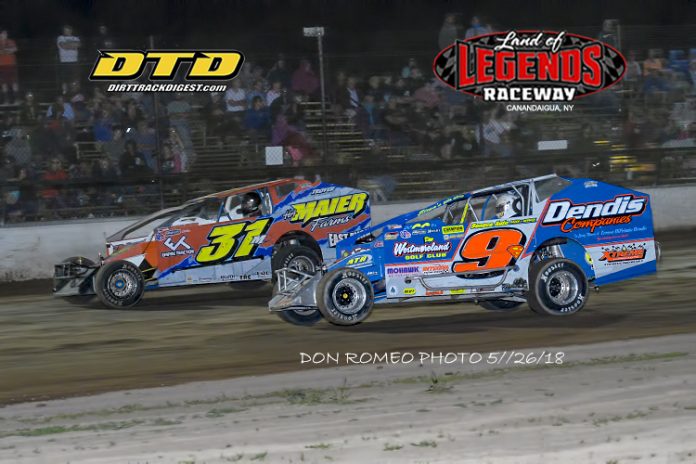 CANANDAIGUA, NY –  On Saturday the unofficial start of summer, Memorial Day Weekend, Land of Legends Raceway initiated its new “Wall of Fame,” inducting the late great Donald “Dutch” Hoag. Present were his son Dean and grandson Alex Hoag to accept the award in a ceremony that took place before racing activity moved to the track.

The New Legends Sportsman portion of the Saturday Spectacular included two 10-lap features. Sam Hoxie took the win in the rain-postponed race from May 19 while Billy Paine won the night’s regular main event, his second victory of the year.

The CRSA 305 Sprint cars were on hand for the first time this year. A field of 22 sprint cars took the 20-lap feature green flag, only to see the red fly quickly as Bobby Hackel IV flipped his car in the first turn. This set up a complete restart.

Altamont invader Trombley took the lead on the restart and led the entire distance. In the closing laps he found himself in a battle for the lead with Darryl Ruggles. Ruggles finished second followed by David Ferguson, Erik Karlsen and Thomas Radivoy in the top-five.


The SuperGen Products with Champion Power Equipment CRSA Sprint Car Series returns to LOLR on Fri., June 22 and Sat., June 23 before closing out the five-race stint in Canandaigua on Sat., July 21 and Sat., Aug. 18.

On the restart Daugherty continued his battle with James Maier for the lead for one lap before the second yellow flag flew. This time Lance Dusett came to a stop between turns three and four. On the restart Maier took the lead for just one circuit before James Sweeting made his presence known at the front of the field.

Track points leader Jimmy Phelps, using an outside pass on Sweeting going into the first turn, took over the lead on lap seven. Phelps then began to pull away from the rest of the field.

On lap 13 Matt Sheppard, who had started the race in fifteenth, broke free and began to chase down Phelps. On lap 22 Sheppard, now on Phelps rear end, was able to slip under Phelps in the second turn after Phelps had drifted high.

“First, I want to thank all of the men and women of our Arm Forces. Without them we would not be able to enjoy ourselves as much as we do. I also want to thank my crew. They could be any other place tonight, but they are here working over this holiday weekend to make this win possible”, stated an elated Matt Sheppard following his second DIRTcar Modified feature win of the year at LOLR. “The key seemed to be my car would go anywhere on the track, while Jimmy’s car seemed limited to just the inside line around the track.”

In the 25-lap DIRTcar Sportsman feature, Trevor Years used his pole starting position to take the early lead. Kane Bristol, who had started seventh, blew past Years on lap eight to take the lead.

A yellow flew on lap 13 when last week’s feature winner Steve Gray slowed in the fourth turn with mechanical issues. On the restart Bristol maintained his lead over Years and Eric Williams. All this time, Nick Guererri and Dave Marcuccilli were working their way forward through the field.

The yellow appeared for a second time on lap 16 when Anthony Kimball exited the track in the second turn. He was able to return to the race without any damage. Kevin Ridley brought out another caution with just four laps remaining when his 20x slowed to a stop in the fourth turn.

Bristol had the field covered and took his first win of the year. He was followed across the finish line by Marcuccilli, Nick Guererri, Ricky Newton and points leader Matt Guererri to complete the top-five finishers.

“I knew we had a really good car tonight, but I didn’t want to see that yellow with four to go with all those good runners in the top-10. Thanks to a good restart we were able to hang on for the win,” stated Bristol.

In the 15-lap Street Stock main event early leader Mike Welch gave way on lap three to Adam DePuy, who then found himself in a battle with Marc Minutolo for the lead.

On lap seven the yellow flew when Brad Steinruck slowed on the track with a flat right front tire. DePuy retained the lead on the restart as the battle for the lead resumed between himself and Minutolo. Minutolo brought out the next yellow on lap 10 after slowing with a flat tire.

At the finish line it was DePuy followed by Welch, Parker Smith, Minutolo and Jason Quigley.

LEGEND LEDGER: Justin Haers took the worst ride of the night, flipping his car multiple times during his heat race. Haers caught the birm with his right rear, which sent him pirouetting three times in the air, with the nose of the car pointing down before he landed and flipped two and half additional times onto his roof. He emerged from his wrecked race car uninjured…..A special “Daryl & Erik Ellsworth Memorial” dash for the Sportsman was run sponsored by Jon and Shannon Ellsworth. Eric Giguere took the four-lap win.

Make sure to follow the point standings and breaking news online by visiting www.LandOfLegendsRaceway.com. Advance sale tickets are also available for purchase online throughout the upcoming months. Log into the website (LandOfLegendsRaceway.com), hit the red “Buy Tickets” button on the homepage, then make a selection from the list of dates & events highlighted.