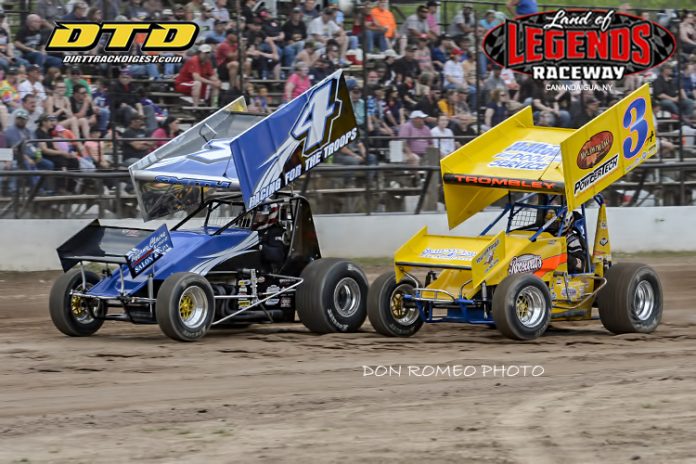 Canandaigua, NY – The stars and cars of the SuperGen Products with Champion Power Equipment CRSA Sprint Car Series invaded the Land of Legends Raceway Saturday night for the second leg of the 2018 season and when the final checkered flag waved, a familiar face landed in victory lane.

Defending series champion Jeff Trombley won the 20 lap A-Main, his first of the season and first of his career at the big half-mile.

Trombley and Jerry Sehn led the 22 car field to the green with Trombley nosing ahead first. Behind the leaders series regular Bobby Hackel, IV took a nasty tumble in turn one. The driver of the Full Throttle R/C Raceway was able to walk away uninjured however his night was over.

With no laps complete, Trombley and Sehn again paced the field to the green and again, Trombley took the early lead. Trombley would begin to pull away however behind him; Darryl Ruggles was starting to find his fast line around the Land of Legends.

After starting from the fourth position, Ruggles stayed inside the top four before taking over the second position. He would chase Trombley as the duo approached slower traffic. Trombley entered traffic with a cushy advantage over Ruggles. Ruggles would quickly make up ground on Trombley and as the laps wound down, would briefly pull alongside Trombley.


Trombley though would not be denied his first Land of Legends triumph and hold on for the win. Trombley would bring the Warren Alexson owned number 3A home first over Ruggles, David Ferguson, Eric Karlsen and opening round winner Thomas Radivoy. Heat races for the 22 car field were won by Dan Bennett, Ferguson and Ruggles.

“I have got to thank Warren Alexson, he gave me a great car tonight,” Trombley said. “The track was awesome, the track prep was great and the fans are awesome. I am glad to be here.”

Trombley, whose Dirt Modified resume alone will land him in some Hall of Fames, would continue.

“Everything I learned in a Modified was wrong in a Sprint Car, it took me a while to figure it out. We are getting there; I am still learning the set-ups.”

The event was also the first round of the CRSA/Land of Legends Challenge Series, which is also courtesy of SuperGen Products and Champion Power Equipment.