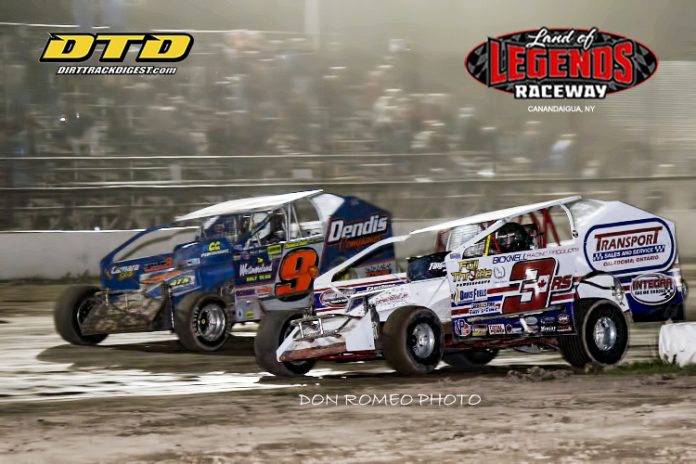 CANANDAIGUA, NY –  Sherwin Williams Paints of Canandaigua presented Saturday Spectacular at Land Of Legends Raceway and Matt Sheppard was picture-perfect as he charged into victory lane for the 68th Pepsi Big-Block Modified win of his career in Ontario County.

“The car definitely got better as the race went on,” noted Sheppard, 35, following his third $2,000 triumph of the season in five starts. “Billy (Dunn) was running low the whole race, and darn good there, that gave me the freedom to move around a little. I could see where I was catching him and where I wasn’t so I was able to use that knowledge to get us to the front.”

Stanley and Hegarty won their heat race before Stanley staved off every challenge from runner-up Nathan Berry out of Athens, Ont. to capture the 15-lap feature. New Yorkers Bob Johnson (Horseheads), Jonathan Kuleszo (Romulus) and Mark Schenck (Dundee) made up the top-five finishing order in the popular event.

Sheppard started 15th among the 24 Big-Block entries qualified for the 35-lap feature and needed only eight laps to reach the top-three. It took just two more times around the fast fairgrounds half-miler for him to grab the runner-up position from early leader Adam Roberts, although the Waterloo warrior needed another 18 laps before he could wrestle away the top spot from Dunn, who had led since lap nine.

“I caught a big break on one of the restarts, a bunch of guys got bottled up and I was able to pass about five of them right there and that made a big difference getting to the front,” figured Sheppard, who blasted from 10th to third after a lap eight restart aboard the potent no. 9s Dendis Companies-Westmoreland Golf Club/Bicknell mount. “(On the restart) the guy in front of me looked like he was going to stay in the middle so I said I’ll just try it up top. I kinda found the middle of (turns) one and two on that restart (lap 14) when Billy and me were on the front row. I rolled the middle and thought I could hang with him there but the bottom of (turns) three and four was still the place to be for quite awhile.”

Lap after lap Sheppard shadowed Dunn and inched closer as the scoreboard kept countng down. Forced to navigate in traffic past season newcomer Chad Phelps, Sheppard sped high out of turn four to author the final lead change as the pair crossed the stripe to complete lap 28.

“Billy was really good rolling the bottom, I kinda moved around a little bit and he started getting away from me,” added Sheppard, who posted a division-best eight wins last season. “The longer the race went on I felt the middle groove really starting to come in more and more and more, and that ended up being the deciding factor.”

New points leader Erick Rudolph from Ransomville rallied from the 14th starting slot to pass Dunn for second with five laps to go while last week’s heat race flip victim Justin Haers and Steve Paine filled out the front-five ahead of Jimmy Phelps. Despite remaining winless to date, Rudolph (275) and Phelps (273) lead ‘Super Matt’ (272) in a tight points battle as Sheppard has his sights set on an eighth straight season title at the Land of Legends speedplant.

Filing in seventh on the 26-car Sportsman starting grid, Guererri survived three early yellow flags in as many laps before forging ahead of outside pole-sitter Trevor Years for good on lap six en route to his first victory of the season.

“Its been a struggle lately but we were good enough to get it done tonight,” beamed Guererri, who turns 47 next Sunday and has been breaking into the Canandaigua winner’s circle since 1997. The long-time racer from Geneva garnered three checkered flags last summer to earn third-place on the final points chart.

“Lost power-steering halfway through the main, been dealing with that issue since last week and thought I had it fixed today. It was alright in hot laps but then lost it in the heat then again in the feature. I had to run the top of the track and that’s not me doing that. But the car was good up there. I ran the bottom at the end and the car seemed to be good down there, too. Can’t thank the crew enough for all they did,” remarked Guererri, before posing in victory lane beside his winning #7 Al Raymond Collision-Proctor Enterprises-Quicktime Shocks by MPR/Bicknell machine.

Years set the pace from the start although a pair of caution periods for minor tangles in turns one and two kept the restless field bunched. A third slowdown on lap three following a multi-car crash between the same turns ended the night for J.T. Sperring and Eric Williams and led race director Greg Hixson to dictate single-file restarts for the remainder.

Guererri held down third when the green lights reappeared and darted past Nathan Peckham with five laps complete. He wasted little time disposing of Years on the following circuit and only two more caution periods delayed the final outcome.

“The track had some tacky spots in it so there was traction to find,” Guererri said. “Turns three and four had the most bite in the middle and coming off the wall was real good, too. It was a fun race, coming out on top is even better.”

Points leader Matt Guererri broke into the top-five after 15 laps although defending track champion Dave Marcuccilli found the going tougher as he was involved in a couple of the early scuffles. On the final restart on lap 19, Guererri was scored third and Marcuccilli 12th. When racing resumed Guererri grabbed second from Ricky Newton on lap 20 and in his relentless rally to the front Marcuccilli prevented an all-Guererri podium finish by catching Nick Guererri as the duo diced for position exiting turn three on the last lap.

Karlsen needed only one lap to snatch the point from pole-sitter Tyler Cartier then withstood a late-race offensive from Darryl Ruggles to secure his sixth career 305 Sprint win at LOLR.

“Been trying really hard but started out the season on a rough note when we hurt the motor so tonight’s a big one,” exclaimed Karlsen, 25, who improved from fourth-place in last Saturday‘s CRSA sprint special to top a competitive 16-car field in his third start of the year. A 2015 graduate from nearby Rochester Institute of Technology with a distinguished degree in mechanical engineering, his father T.J. Karlsen copped the family’s first feature at Canandaigua in the Sportsman division’s 1987 debut. “We’ve really picked it up since then. Last week we were really close and tonight we finally pulled it off.”

With Karlsen opening up a near straightaway advantage through the opening five laps, Ruggles quickly reduced the gap when traffic forced the leader to change lanes. A pair of yellow flags over the final four laps put Karlsen and Ruggles nose to tail on both retstarts yet the Romulus racer would not be denied as he stretched the final margin to 10 car-lengths in his no. 66 Karlsen Land Surveyor-Lake Street Station Winery-Finger Lakes Truck & Welding Supply/Maxim housing a self-built powerplant.

“I knew Darryl was there, saw him poke his nose underneath,” recalled Karlsen, who ventured out to the Empire Super Sprint (ESS) circuit last season after capturing Canandaigua’s 305 points championship in 2016. “I just said well, I’ll make him drive around me … he couldn’t get around so I guess that’s it.”

A dozen street stockers took starter Scott Hixson’s initial green flag in the first feature event of the evening with Brad Steinruck showing the way. Pressure was apparent from the beginning of the 15-lap headline event as sixth starting Marc Minutolo moved into second on lap two and seventh starting DePuy secured third after two more times around.

Minutolo charged past Steinruck for the lead on a lap four restart and Macedon’s DePuy mirrored the maneuver by overtaking Minutolo on a lap seven restart. A seemingly comfortable five car-length lead with five laps left suddenly evaporated as Hixson unfurled the white flag signaling one lap to go.

A four-wide run —featuring leaders DePuy and Minutolo and back markers Dakota Sharp and Bundy Metcalf— into turn one thinned out in dramatic fashion as contact from Minutolo pushed DePuy into Sharp and Metcalf, who sustained the most damage in the aftermath.

“When I got into turn one I thought I broke a shock the way my car shot up into the #74 (Metcalf), didn’t really know that Marc had bumped me,” divulged DePuy, 44, who regained control of his no. 99 Nance’s Mustard-A..E.Y. Enterprises/Chevrolet Camaro to finish ahead of all-time Land of Legends stock car winner Mike Welch in the final lap restart. “Marc got a flat tire but (Metcalf) got the worst of it.”

“I knew Marc would be there somewhere. He got an unlucky break when I got the top, got a run on him and made it work. Its not gonna be like that all the time, Marc is gonna get his wins but we’ll take this one,” added DePuy, who continued to thank the fans that come out every week and show their support.

Five New Legends Sportsman drivers turned trackside for their 10-lap feature. Paine grabbed the top spot from Western New York regular Tyler Vinson on lap three and never looked back in the caution-free 4-minute dash to the checkers. John Cordovani drove Matt Guererri’s car to a second-place finish ahead of Vinson, Sam Hoxie and Austin Germinio, behind the wheel of Jeff Lawrence’s no. 1L ride.

A special microd exhibition lined up on Saturday has been rescheduled for June 30 to accomodate the participating clubs. Pit gates unlock at 4:00, grandstand seating begins at 5 p.m. and hot laps start at 6 while race time is set for 7 p.m.

The minimum age is 16 years-old for all demolition derby competitors. Entry fee is the cost of a Pit Pass ($30) and posted prize money is $600-to-win, 2nd-$300, 3rd-$150. Complete derby rules can be found on LandofLegendsRaceway.com. For more information please contact derby director Wayne Ellison at 315-719-2328.

Congratulations to the late, great Dutch Hoag and his family after his inaugural Land of Legends Raceway Wall of Fame induction on May 26. The next WoF ceremony will take place on Sat., June 23 with the second honoree to be recognized for attracting racing stars and bringing stability to the historic fairgrounds oval as well as establishing a home track for many current and future Hall of Famers.

Land of Legends Raceway will be showcased in the Empire State when the May 5 Patriot Sprint Tour event is aired on CW-23 in Buffalo at 2 p.m. onSat., June 16, CBS-5 in Syracuse at 7:30 a.m. on Sun., June 17 and on CW-16 in Rochester at 10:30 a.m. on Sun., June 17. The hour-long production is part of ‘Speedway Showcase’ hosted by Rich Vleck with race analysis provided by Doug Elkins and pit reporting from Paul Szmal.

Make sure to follow the point standings and breaking news online by visiting www.LandOfLegendsRaceway.com. Advance sale tickets are also available for purchase online throughout the upcoming months. Log into the website (LandOfLegendsRaceway.com), hit the red “Buy Tickets” button on the homepage, then make a selection from the list of dates & events highlighted.