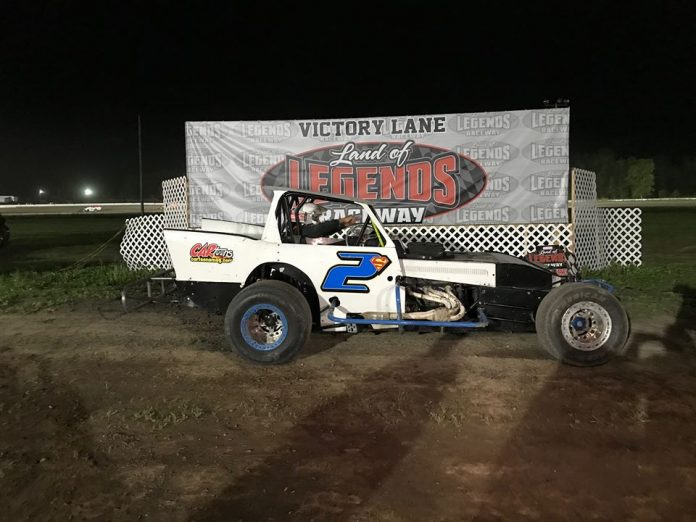 CANANDAIGUA, NY – The Dirt Modified Nostalgia Tour made it’s first ever appearance at Land Of Legends Raceway this past Saturday night which saw the 2017 DMNT Champions flex some muscle.

The Kingston Krew of John Stanley and Tim Hegarty would win their respective divisions at the historic half mile and serve notice both intend to defend their titles in 2018.

Stanley would jump to the lead quickly off the pole starting spot and run on cruise control for the majority of the race. While the blue #2 was sailing, positions 2 through 7 would see all the action.

Jon Kuleszo, Bob Johnson, Evan Reynolds, Mark Schenck, Nathan Berry and Matt Barbour were the show, dicing for the majority of the race. Eventually Johnson and Berry would clear the pack and run side by side for several laps. Berry would use the bottom of the track to prevail leaving Johnson third, Kuleszo fourth with Schenck rounding out the fast five.

Hegarty would cross the line 9th but pick up the win in the Nostalgia class. Newcomer Jeff Mitchell would place 10th and secure 2nd for the class.

Notes Of Legend…Matt Larrivee and car owner Tom Belewich nightmare start to 2018 continues, engine issues would see the 22 unable to run the heat, clutch issues would ruin the feature…Mark Schenck, Karl Weichenthal, Jeff Mitchell, Bob Johnson and Richard Taggert would see their first ever action in the series…Michele Kuleszo would debut her new car and make her first ever pass in her heat race…Evan Reynolds continues to impress mixing it up with more experienced drivers…Stanley looking like he is returning to his 2016 form, strong on the half mile tracks…LOLR promoter Paul Cole has purchased a vintage modified from Ken Knapp, will we see him turn some laps in 2018?…Race Director Mike Verbeek in formal vintage dress, in honor of former Kingston and Brockville Speedway flagger Phil Marshall…The DMNT returns to action July 21st at the very small confines of Paradise Speedway in Geneva, NY. 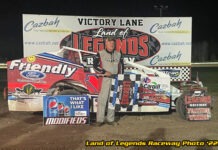