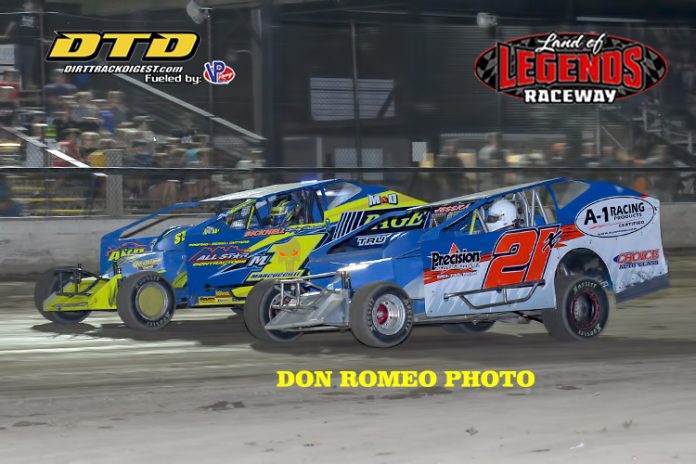 CANANDAIGUA, NY – On a night promoter Paul Cole faced the forecast of possible rain showers across the region, it was ironically the recent unseasonably dry weather that ultimately forced him to curtail the ‘Saturday Spectacular’ at Land Of Legends Raceway.

Plagued by an uncharacteristically rough racing surface giving way to dusty track conditions, first-year LOLR landlord Cole weighed the options and with input provided from competing race teams, made the difficult decision to postpone the Big-Block Modified feature to a later date to be determined. The New Legends Sportsman race was cancelled altogether.

A trio of main events did go down in the record book with veteran defending track point champions Dave Marcuccilli (Donath Motor Worx Sportsman) and Adam DePuy (Big Dog Country Street Stock) returning to victory lane while teenager Jake Karklin (Mike Emhof Motorsports 305 Sprint) made his first-ever visit to the Ontario County Fairgrounds a most memorable one after capturing the A-main.

“After the past couple weeks of hot and dry weather, we cut up the track hoping to allow the retention of more moisture to reduce the amount of dust we’ve experienced recently,” remarked Cole, personally addressing the Canandaigua crowd over the public address system following four divisions of heat race qualifiers. “In hindsight, it was a mistake as it created an unsafe track for racing. To make it up to all the fans, the next show is on me for everybody bringing back their ticket stub from tonight.”

Although Cole reluctantly cut the Big-Block feature from Saturday’s card, Autograph Night presented by Cargill Products and Main Energy provided hundreds of fans young and old plenty of thrills during intermission. A majority of the grandstand crowd packed the frontstretch which was filled with cars from all five divisions —parked 4-wide from turn four to turn one— with drivers offering candy and autographs on their hero cards as well as candid photo shoots to those going trackside during the break.

Despite the Sportsman finale designated as a “non-point exhibition” due to the prevailing track conditions, it was Saturday and Marcuccilli came to race with cash prizes still on the line. Show-up points were awarded to all 22 Sportsman pilots entered.

“People come out to watch us race so I felt bad loading up the car in the trailer,” stated Marcuccilli, 41, following his third straight win and fifth on the season in Canandaigua. Circuit-wide the Montezuma racer has now taken 13 checkered flags. “The biggest problem was dust, some of the bumps were bad but you could drive around them. Hopefully, we’ll be back next week to put on a better show for the fans.”

Gray continued to improve, overtaking Lincoln for third on lap 14 and disposing of second-place Lloyd the next time around. The battle for third between Lloyd, Lincoln and Bristol over the final five laps was the fiercest on the track, with Bristol taking the show position at the line.

“Have to thank everybody in the stands that stuck it out tonight to watch our race, might not have been the most interesting but the track was still tricky,” noted Marcuccilli, on the heels of his 26th career Sportsman win at LOLR, putting him third all-time behind only Paul Guererri (44) and Gray (29). “Hope (track crew) will get everything fixed back up in time for for next week.”

“Didn’t really know that anybody spun out at the beginning until I was going by them so I was lucky (to miss), just in the right spot not to get caught up in it all. Fortunately, it was the only incident of the whole race so maybe that was somewhat interesting to watch. Its been a blessed year so far, so happy for the season we’ve been having and hoping to keep it going,” added Marcuccilli, who remains in pursuit of a fourth successive points crown at the fairgrounds.

It took only one trip to wine country for Karklin to do something his father never did in four attempts, and that is to pull into the elusive winner’s circle at the end of a sprint car race at Canandaigua.

“Never thought it was going to happen tonight, I know these guys race here weekly and its our first time being here … and my first year racing too, so its a big victory, big achievement,” beamed Karklin, 18, whose father Johnny Karklin Jr., a six-time winner on the Empire Super Sprint tour, qualified for three ESS A-Mains at LOLR to kick off the new millenium, finishing a 10th-place best in May, 2002. Kid Karklin posted his first career win earlier in the season closer to his Charlotte N.C. home in a Carolina Sprint Tour event staged at Sumter (S.C.) Speedway.

Karklin first hit the track at 6 o’clock to put heat in the motor of his no. 5K JCK Motorsports-Doug McLain Trucking-DEN Motorsports/Maxim. Four hours later he was posing in victory lane after becoming the 20th different 305 sprint car winner since the division was first introduced to the Canandaigua contingent in 2012.

Karklin started eighth on the grid yet wasted little time adjusting to the fast half-mile clay oval. When early leader Brandyn Griffin suffered a flat right-rear tire while the field coasted under caution on lap 3, Karklin moved in quickly to chase new point man Dan Bennett with a quarter of the 20-lap A-Main in the scorebook.

Karklin shook off a pair of yellow flags —both caused when current LOLR points leader Darryl Ruggles dropped off the pace— before halfway, finally charging past Bennett as the lead duo diced rounding turn two on lap nine. After rejoining the field following his soft shoe, Griffin slid high off the track in the second corner on lap 10 before Johnny Kolosek performed a stop-and-go the next lap to incur the final slowdown.

Karklin enjoyed the single-file restart on lap 11 and never looked back, cruising to a full straightaway margin of victory while a relentless Ruggles rallied to secure runner-up laurels at the stripe. Tyler Cartier, Bennett and Erik Karlsen settled for top-5 finishes at the line.

“Have to thank my dad and Doug Emery as well, if it wasn’t for him we wouldn’t be here as he helped out big time,” added Karklin, who joined Jeff Trombley, Bennett and Griffin on the list of first time sprint winners at LOLR in 2018. For the second straight week a native North Carolinian has copped a feature win at Canandaigua, with fellow second-generation chauffeur Max McLaughlin, raised in Mooresville, N.C., winning the Pepsi Big-Block Modified feature.“Actually came (north) to pick up a 360 (cubic inch engine) to run the next couple of months and Doug has given us big help. He’s letting us use his own 360 for awhile to get feelers for it. Now its up to my dad where we will race after that, in the Northeast or back at home.”

The 15-lap Big Dog Country Street Stock feature needed all 15 laps to decide the winner, then an additional five minutes to make it official. Contact between leader DePuy and top contender Marc Minutolo sent the frontrunner into the turn four wall the last time around and despite Minutolo crossing the line first, DePuy was credited with the victory.

“I knew Marc was gonna be there,” figured DePuy, 44, after posing alongside his no. 99 Fox’s Auto-Nance’s Mustard-Quigley Flooring-A.E.Y. Enterprises/Chevrolet Camaro in the winner’s circle for the sixth time this season. “I don’t know if he just got into (corner) too hot or what happened … but got into us a little bit, then went into the wall and obviously we got a flat tire. I guess that’s racing.”

Shawn Lloyd jumped ahead first from his outside front row start while fifth starting DePuy wrestled second-place away from pole-sitter Jason Doty the second time around. Carl Johnson slowed on the back chute with three complete to require a yellow flag and on the ensuing lap four restart DePuy sped to the front of the 12-car pack.

When Ron ‘Bundy’ Metcalf rolled to a stop on the back chute the following lap, track officials directed Lloyd to turn pitside to remove some sheet metal that was rubbing on the right-rear tire to pose a safety hazard. Eighth starting Minutolo inherited the runner-up slot and the race was on for bragging rights.

With DePuy maintaining a seemingly comfortable lead as the laps dwindled, a third and final yellow flag suddenly unfurled with only one to go as debris sat stranded on the front straightaway in the middle of the racing groove. The last lap dash to the checkers was worth the wait as the lead duo stayed on the gas the final half-mile with the last corner, last lap tap deciding the final outcome.

“We struggled for (last) three weeks, been working on it and working on it, and the car was finally good tonight,” added DePuy, after ending a four-week drought with the 35th win of his career at the Land of Legends. “The track was a little rough but its still nothing we haven’t raced on before. You just race when you gotta race.”

Land of Legends Raceway hosts its final ‘Saturday Spectacular’ of the month on July 21, including a full card of Pepsi Big-Block Modfied, Donath Motor Worx Sportsman, Big Dog Country Street Stock and New Legends Sportsman action plus a return appearance by the CRSA Sprint Cars (including make-up feature from June 23), all presented by Proctor Enterprises on First Responders Night with a Microd Exhibition to benefit Autism Up of Rochester on tap.

The July 21 show kicks off with induction ceremonies for ‘Barefoot’ Bob McCreadie, the third individual to be honored on the Land of Legends Raceway Wall of Fame.

The Watertown veteran ended his illustrious career in Canandaigua with 99 Big-Block Modified feature wins and six track point championships, ultimately grabbing more than 500 checkered flags on both dirt and asphalt during four decades of racing up and down the east coast. The late great driver Dutch Hoag (May) and prized promoter Glenn Donnelly (June) were the first 2018 inductees.

No oval track racing is scheduled at LOLR on July 28 although a Tuff -Truck-Tug-O-Warz is scheduled on Thursday, an Empire State Pullers/Lucas Oil Pro Pulling League Tractor Pull is slated for Friday and a Demolition Derby runs Saturday followed by fireworks at the fairgrounds.