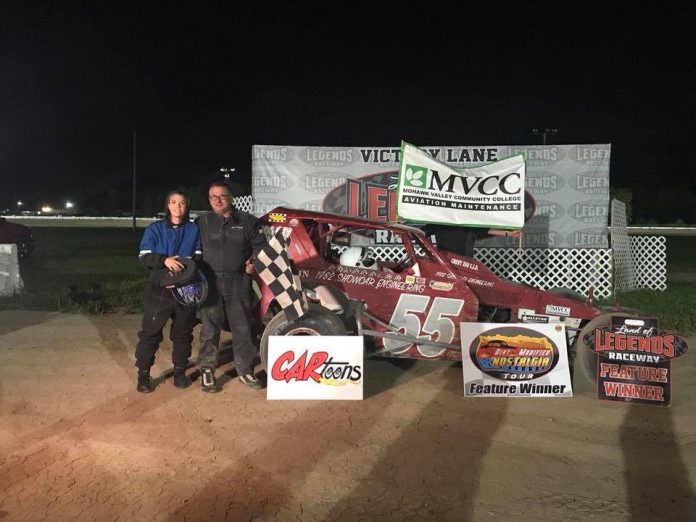 CANANDAIGUA, NY – The Dirt Modified Nostalgia Tour wrapped up it’s 2018 season at the Land Of Legends Raceway in Canandaigua, NY this past Saturday night.

The feature event however would be contested by a couple of guys who were both looking for their first win of the season. Bob Johnson of Horseheads, NY would take the lead from Stanley on lap two and looked to be in control of the 15 lap affair. They were followed closely by Evan Reynolds, Berry and Romulus, NY hotshoe Jon Kuleszo.

Berry and Kuleszo would slip by Reynolds a few laps later but Johnson had his Quickskinz Mustang bodied mount comfortably out front.

A lap 7 caution would bunch up the 22 car field and put Berry’s purple Pinto the team has named “The Grimace” on the bumper of Johnson’s car he refers to as “Trigger” with Kuleszo sitting third.


Kuleszo would take the high side around both Berry and Johnson on the restart, surprising both drivers and then fend off Johnson who tried the top side in vain coming to the flag on turn four. Berry would take advantage and slip by Johnson for second, with Evan Reynolds and Matt Barbour rounding out the fast five.

Matt Larrivee would bring the Tom Belewich owned ride home in 11th to claim the Nostalgia feature win. Hegarty had his Championship wrapped up the week before at Airborne claimed his second consecutive Nostalgia crown.

Notes Of Legend…the largest field of the season at LOLR for the DMNT with 22 entries from across Central NY and both eastern and western Ontario…Bill Profota, Steve Billings, Pat Charland, Roy Rinne and Darrell Wilson made their first appearance of the season at LOLR…Heats were claimed by Johnson, Kuleszo and Larrivee…9 Nostalgia cars in attendance, the most all season…despite medical issues Richard Taggart made an appearance with his one barrelled 6 cylinder…positive feedback from the staff and fans at the Land Of Legends, we look forward to returning next season…we hope to expand our schedule slightly in 2019 with hopefully a few more tracks in the mix.