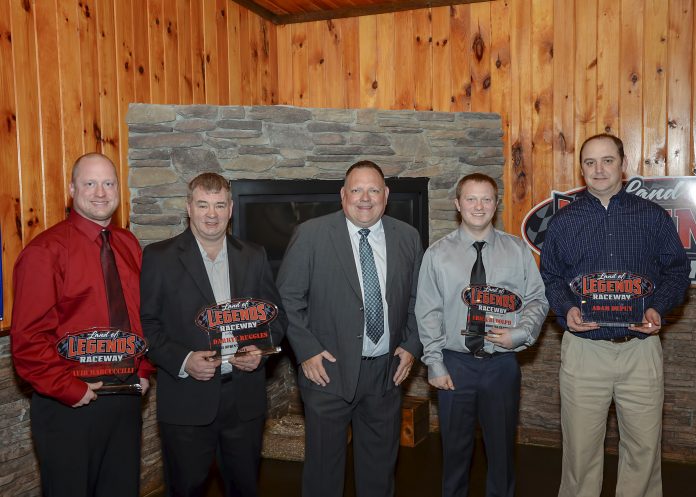 A cocktail hour and prime rib buffet dinner kicked off the evening agenda while Creekside Entertainment from nearby Newark provided music to close out the night. In between, first-year LOLR promoter Paul Cole handed out $35,475 in point fund cash to 67 drivers, with product contingencies and bonus rewards elevating the total beyond the $40,000 mark.

“The first year was all about establishing a foundation,” noted Cole, 48, who took control of the historic oval last autumn before helping restore its reputation as one of the premier race facilities in the Northeast. “We raised the bar for what both the racers and fans should expect in the future here at the Land of Legends. And looking around at the competition, I feel we have one of the best Modified and Sportsman fields in the region. There’s never a night off for any team in contention and every week is truly a ‘Saturday Spectacular’ for our fans and sponsors that come out in support.”

Trophies were presented to the Top-3 point-getters in all four headline divisions, with 18 drivers in both Big-Block and Sportsman divisions and Top-10 in 305 Sprint Car and Street Stock classes receiving healthy point fund checks. Rudolph and Marcuccilli each pocketed the $2,000 lion’s share of the lucrative season-ending $10,650 Big-Block and $10,100 Sportsman funds, while Ruggles ($1,000) topped the $5,400 305 Sprint pool and DePuy ($1,100) headlined the $5,325 Street Stock payout.


“We always want to get more cars and more fans, so raising the purses and upgrading the grounds is a trend we want to continue into the future,” said Cole, who also contributed $12,000 to local charities through weekly 50/50 draws held trackside during the season. New lights, scoreboard and videoboard, timing loop, sound system, internet, concession stand and a food truck in the pits were some of the most visible enhancements to the Ontario Couny fairboard-owned property on raceday.

“I thought I knew a lot before, yet every week I learned something new out at the track. More importantly I learned to listen to those that have been in the racing business and around this place for a long time, and not always to the voice in the back of my head. And I knew from the start how important surrounding myself with a great team of officials woud be. The end result of where the track rates today says it all,” Cole added.

Speedway announcer Wendy Emerson joined Cole as masters of the ceremonies on this festive occasion, recognizing every award winner for their accomplishments, interviewing each divisional champion, runner-up and third-place finisher and acknowledging those special guests in attendance. Custom-designed video/slide shows produced by FLX Media Group (Mel & Matt Thomas, Art Rorick) of each points champion were projected onto a large screen in front of the audience throughout the presentations.

“Thanks to my family, all my teammates and the whole track crew, definitely a memorable season, don’t expect Saturday nights to be any different this year,” stated Rudolph, now 27, who was joined Saturday night by his father Charlie, the overall 1986 Mr. DIRT Big-Block Modified champion and former Canandaigua favorite. The newest track points king captured his first career championship at LOLR —first garnered anywhere in Big-Block competition— by a single point over eventual Mr. DIRT champ Matt Sheppard using a pair of wins and a dozen Top-5 tallies in 16 feature events.

“(In title defense) there won’t be any more pressure this time around than what I already put on myself. Others on the outside may have higher expectations for our team now but our goals and what we set out to do remain unchanged,” added Rudolph, who also led 35 feature laps and registered four qualifying heat race victories in the no. 25 Opti-Coat-Blue Cross/Blue Shield-Mohawk Northeast/Bicknell entry. “This title is really a testament to my team and all their hard work, should be another fun year.”

The Sportsman ranks will crown a new champion in 2019 as Marcuccilli will field a 358-Modified team and drive a Big-Block for car owner Mike Payne on a part-time basis during the upcoming campaign.

“We’ve raced here since 2012 and now we’re leaving with four straight championships so its hard to have any regrets,” noted Marcuccilli, 42, who leaves Canandaigua with 28 career Sportsman wins which ranks third all-time. In ’18 he found victory lane seven times and totaled 13 Top-5 finishes in 16 starts piloting his blue no. M1 Page Trucking-All Star Contractors-Mohawk Northeast/Bicknell mount. “We’ve accomplished a lot around here, hopefully we can build on this kind of success in the years ahead.”

Bettering by one checkered flag Marcuccilli’s seven-win season at the fairgrounds, veteran racer Ruggles also secured his fourth 305 Sprint points championship since the class debut in 2012 while improving his all-time division-high win total to 35 behind the wheel of the #48jr. Willmes Enterprises-VanBortel Trucking/Eagle. He led a track-best 139 laps in 18 A-mains that included five CRSA touring events (3 wins), finishing all but two of those in the Top-5.

“Can’t ask for much more than what we’ve done this past season,” figured Ruggles, 53, who has scored victories in all the Land of Legends’ major divisions (BB Mod-2, Spt-10, Sts-2) during his continuing Canandaigua career. “I have just as much enjoyment watching the success of Alysha (daughter) and I’m already looking forward to the start of 2019.”

While the trio of open-wheel stars were savoring their coveted track titles in wine country, ranking atop Canandaigua’s full-fender points chart has become a hard habit to break for seasoned chauffeur DePuy in the Street Stock division. Despite registering a division-best eight feature wins, DePuy still needed to stave off weekly rival Marc Minutolo in the season-finale to claim his second straight track crown.

“Along with my family, crew and sponsors, would also like to thank all the fans that make racing in Canandaigua so special,” remarked DePuy, 44, who placed his no. 99 Fox’s Auto-Nance’s Mustard-A.E.Y. Enterprises/Chevrolet Camaro among the front-five in 14 of 17 events. He also sits second on LOLR’s all-time Street Stock list with 37 career victories scored since the start of the millennium. “A big thanks also has to go out to Paul (Cole), this is one of the funnest years we’ve ever had racing at the fairgrounds. Looking forward to more to come.”

Although mixing in with the reglular Sportsman in 2019, New Legends Sportsman continued competition at Canandaigua for an eighth straight season, with Billy Paine (5), Sam Hoxie (4), Tyler Vinson (3), Timmy Borden Jr. and Nick Cooper taking checkered flags in LOLR’s entry-level open-wheel class. Like Rudolph, Sanborn’s Vinson, another third-generation pilot towing in from Western New York, topped the unofficial points chart contending in all 14 main events that brought the curtain down on each weekly program.

Opening up the evening program was a special tribute to Lee Sanders by distinguished sprint car proponent Mike Emhof. A long-time favorite at Land Of Legends Raceway, Sanders was a lifetime supporter of the speedway who officially hung up his helmet after nearly 40 seasons of short-track competition in CNY.

For the past 39 years this versatile Shortsville chauffeur contended in the Modified and Street Stock ranks before closing out his career in a winged machine. In his most recent return to the Land of Legends for sprint car competition, he finally cracked the open-wheel winner’s circle, tallying his first 305 victory in 2015 before going on to capture six more checkered flags by the time 2017 came to an end.

Sanders opened 2018 with John Trenca strapped in to his #26 ride, yet after three races health issues forced him to make a decision and he finally sold off the remainder of his equipment. Joined by his lovely wife Cheryl on Saturday, the ‘Colonel’ was honored for the final time for his contributions to Canandaigua Speedway, the Land of Legends, and his lifetime of achievement.
As the awards portion of the progarm neared closure, Cole offered some final congratulatory remarks while laying out preliminary plans for the 2019 race season. The ceremony ultimately concluded when LOLR General Manager Greg Emerson and Race Director Greg Hixson surprized Cole with their own presentation of a unique ‘Rookie of the Year’ award, one most fittingly followed immediately by a standing ovation from all those in attendance.

Dozens of door prizes were drawn during the energetic three-hour affair, while a number of individuals were recognized for their tireless efforts exhibited during the past year. A very deserving ‘Employee of the Year’ appreciation award was presented by Cole to dedicated track tow truck driver Curt Sheridan. Also acknowledged was Lee Depew, anchor of the track prep squad that provided vital assistance throughout the season, as well as the entire LOLR management team and valued staff members, with Cole extending a sincere ‘thank-you’ to all those that served the speedway.

The ‘Hard Luck’ award went to Big-Block Modified regular Justin Haers after returning from a wild ride taken at the end of May in his familiar red #3 Honeoye Auto Parts-Phelps Cement Products/Bicknell entry. Haers flipped the car multiple times in his qualifying heat after catching the birm at the end of the back straightaway with his right rear tire which sent him pirouetting three times in the air through turn three. With the nose of the car pointing down, he landed then flipped two and half additional times onto his roof. Solidly in the hunt throughout the season, the Phelps racer logged nine Top-5 feature finishes yet was unable to crack the elusive LOLR winner’s circle and wound up fifth on the final points chart.

Sportsman drivers Benny Karlsen from Romulus and Horseheads’ Eric Williams shared the ‘Sportsmanship’ award, while Alan Johnson’s no. 14J Friendly Ford-Cargill-Conley Farms/Bicknell Big-Block car owner Mark Spoor (Crew Chief/Team of the Year) and dedicated Street Stocker Ron “Bundy” Metcalf (Tim Downs Spirit of Racing) were recognized for their individual contributions exhibited in 2018. Cole commemorated the Spirit of Racing trophy in memory of LOLR Sportsman driver and mechanic by trade Downs, 61, who passed away unexpectedly on Dec. 28, at his home in Bergen.

With the curtain officially dropping on Saturday, that means the start of Land of Legends Raceway’s 56th season is just three months away. Headlined by the mighty Big-Block Modifieds, the 2019 LOLR opener has been set for April 20, with a pair of practice days slated for April 13 & April 17 at the historic Ontario County oval.

Be sure to join us every Saturday night this race season for a full show of open-wheel Modified, winged Sprint Car and full-fender Stock Car action. Land of Legends Raceway is located on County Road 10 at the Ontario County Fairgrounds, just 1-1/2-miles north of Routes 5&20, and is easily accessible from the NYS Thruway (I-90), taking Exit 43 (Manchester, Route 21 South) traveling from the east or Exit 44 (Farmington, Route 332 South) coming from the west.