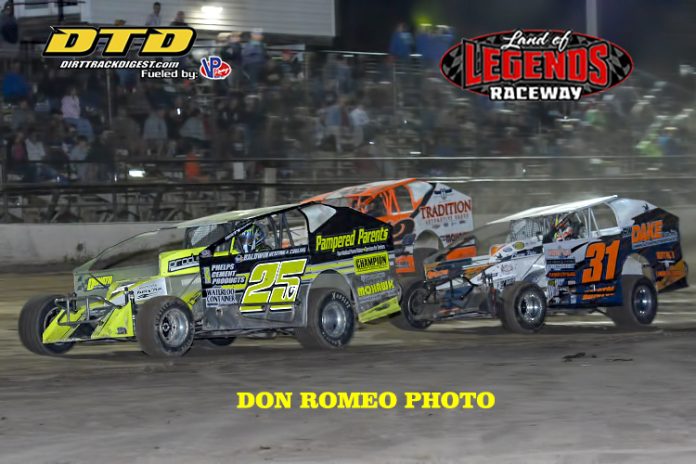 CANANDAIGUA, NY – Sun-filled skies and temperatures in the high-60s greeted racers and fans Saturday afternoon as Land of Legends Raceway unlocked its gates for a 56th season of motorsports activity at the historic half-mile clay oval. Second-year track promoter Paul Cole and his staff welcomed back nearly 40 teams and a couple hundred eager fans, with the Ontario County Fairgrounds speedway gearing up for its 42nd year of DIRTcar racing in 2019.

“Last year we worked our way from the ground up and this season we’re able to fine-tune and build on the solid foundation that we now have in place,” noted Cole, as he continued in preparation for next weekend’s long-awaited Land of Legends lid-lifter. “We have the back stretch pits finished and added a new set of scales. We’re looking forward to keeping the show fresh from week to week and offering another entertaining summer for everyone that comes out in support.”

Scott Hixson is again in control of the race action as he serves as head flagger for a sixth season at the popular wine country speedplant.

Steve Ovens joins Wendy Emerson as the weekly voices of LOLR in ’19 with the familiar duo of Doug Elkins and Shane Andrews slated to make guest appearances behind the microphone during the season. Also filling the tower on raceday, the talented trio of Sheila Darcy, Gary and Donna Spaid return to anchor the electronic scoring system as FLX Media Group founders Matt Thomas and Art Rorick, along with chief camera operators Mike Lawler and Bob Miller, coordinate ‘live’ internet streaming and the track video production program.


While last season’s speedway resurgence included the addition of a brand-new multi-purpose scoreboard and scoring loop, installation of advanced LED track lighting, mobile ‘jumbotron’ video display on the frontstretch and incorporation of fiber optics and wi-fi capabilities throughout the property, arrangements for new aluminum grandstand seating are being made as Cole and the Ontario Co. Fairboard work toward obtaining a grant from New York State in order to further upgrade the facility.

LOLR Big-Block regulars Gil Tegg Jr. and Lance Dusett led a half-dozen Modified cars to their first green flag of the season, followed in order by Small-Block chauffeurs Greg Martin, Nick Joy, Brad Godshalk and Scott Kerwin aboard his self-owned ride that Canadian upstart Mat Williamson will pilot on Fridays closer to home out west at Ransomville Speedway. Dusett was the lone casualty of the day as the red #77 Batzel’s Automotive entry loaded up after sustaining a blown engine.

A second practice day is slated for Wed., April 17 with all gates opening at 4 p.m. and track time reserved 5-8 p.m. Grandstand general admission is free to fans once again and the pit fee remains $20 for this final tune-up.

The official DIRTcar season-opener is set for Sat., Apr. 20 with the ‘Cabin Fever 40’ for Sportsman (show up points only) headlining the weekend show. The first Saturday Spectacular includes a lead-off 35-lap feature for Big-Block Modifieds along with qualifying and main events for winged Sprints and full-fender Street Stocks.

Grandstand gates unlock at 5 p.m. and the first qualifying heat is scored at 7 o’clock. Racers are allowed in the pits at 4:30 with warm-ups slated for 6 p.m. following a brief driver’s meeting conducted at 5:45.

Advance sale tickets are always available for purchase online by logging into www.LandOfLegendsRaceway.com, hitting the red “Buy Tickets” button on the homepage, then making a selection from the list of date(s)/event(s) provided.

Land of Legends Raceway is located on County Road 10 at the Ontario County Fairgrounds, just 1-1/2-miles north of Routes 5&20, and is easily accessible from the NYS Thruway (I-90), taking Exit 43 (Manchester, Route 21 South) traveling from the east or Exit 44 (Farmington, Route 332 South) coming from the west.