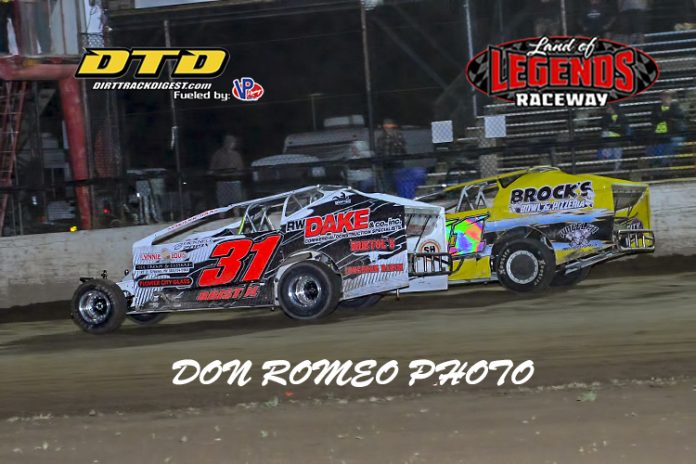 “It’s amazing to have events like this, big thanks to Nick Guererri, he did a ton of work on this,” stated Bristol, 34, following his second win of 2019 and sixth career triumph at the hallowed half-miler. “Great to race for these kinds of prizes and money, will put it back into the car, do our homework and try it all over again.”

A quality field of 40 Sportsman teams signed in for the first DIRTcar racing show staged during the Fair since 2008. Bristol was the quickest in timed group hot laps, stopping the clocks at 19.028 sec. (94.597 mph) before joining fellow heat winners LOLR regulars Andrew Smith and Kevin Ridley and outside invaders Chris Hulsizer and Adam Leslie in the re-draw among top-10 preliminary race qualifiers.

Central New York traveler Torrey Stoughtenger drew the pole while Bristol filed into fourth on the 28-car starting grid, yet it was Stoughtenger’s front row partner Nick Guererri that surged ahead to kick off the 40-lap finale. Bristol followed into the runner-up slot the next time around, then forged the lone lead change on lap four as the top two swapped positions exiting turn two.


Canandaigua weekly runner Garrison Krentz suffered a flat left-rear tire on lap 12 to incur the first of four caution periods before Tim Baker slid through the infield and Paul Guererri had his own right-rear tread lose pressure to require another yellow flag on lap 15. At the halfway mark, Bristol held a commanding lead over Steve Gray, Ridley, Bob Henry Jr. and Nick Guererri with 18th starting Kyle Inman on the brink of breaking into the top-five after passing current Canandaigua points leader Kevin Root.

After reaching the runner-up position, Ridley’s quest for a third feature win this year went up in smoke on lap 25 and a second restart was needed when LOLR first-year weekly campaigner T.J. Castelletti coasted to a stop between turns one and two. Back under green, Inman blasted into second spot and over the last dozen laps attempted to track down the leader as traffic began to thicken.

Yet despite Inman able to cut the deficit in half over the final five laps, Bristol’s dialed in no. 31 RW Dake Commercial Contracting Specialist-Lynnie & Lou’s Ice Cream/Bicknell machine would not be denied as the Farmington pilot cruised home for a solid six car-length victory, easily the most lucrative of his Canandaigua career.

Henry, Root and Gray rounded out the top-five followed by Nick Guererri, Smith, Will Shields, Matt Guererri and A.J. Lloyd.

“The car was awesome. Felt good everywhere, just tough to know where everybody else was running when you’re up (front) so long,” noted Bristol, who collected more than $700 in lap money, to go along with a $1,000 top prize and $500 winner’s bonus provided by Proctor Enterprises. He pocketed an additional $100 for chasing Smith across the line in a special four-lap Jerry Haers Sr. Memorial Dash comprised of the five heat winners.

“I started to slow down there a little bit at the end, wasn’t sure … ‘they gonna get me underneath, they gonna get me up top’ … so I just tried to stay where it was smooth. The car was fast everywhere, just don’t think there was a bad spot on the track that I could run with this thing.”

“I saw a lot of these kind of endings racing against Marcuccilli (Dave, 4-time and ’18 LOLR points champ), thought you’d have the race won and then he’d go right by you at the end. So its great to stay on it the whole time and come across with the win,” Bristol added.

“We were really coming at the end but its tough when you gotta start 18th, luckily we had a whole bunch of laps to get it done, still would’ve liked a few more,” reflected Inman, the current points leader at nearby Genesee Speedway with three wins this year at the Batavia oval. “Really hoped for a better starting position for the feature but that’s sometimes how it goes.”

“Maybe another restart would’ve been good, felt we were closing in on him at the end. Was hoping to get into lapped traffic sooner. Saw him slowing up and was gonna make a banzai move and see what happens. But second-place is still a good run, happy we finished in one piece after the track crew smoothed it out following the heats,” added Inman, who scored a win at Canandaigua in the GRIT Sportsman series race held last June.

Towing west from the Syracuse suburb of Clay, Henry was even more content with a third-place showing, logging track time the previous Saturday in his own black no. 21H Henry’s Exhaust Systems/Bicknell ride before returning aboard Josh Livingston’s time-tested orange #10J Big 4 Tire/BRP entry.

“For a car that’s almost a decade old with all flea market parts, and for us to be able to play with these (top teams), it means a lot,” beamed Henry, who recalled Canandaigua being the first track he won a Sportsman feature at age 16 in 2001. “This was just our fifth race with this (’10 Bicknell) car. Took it over to our shop the last two races and got a first and now a third. I guess I’ve always liked this place and I’m really proud of all the work Josh has done on the car and the way we ran tonight against a lot of much newer equipment.”

Jeff Taylor from Chittenango claimed the 20-lap ‘B’ Feature in his second-ever appearance at LOLR, pacing the 11-car field the entire distance aboard his no. 11T The Wild Animal Park-Montroy Development/Bicknell machine.

Just as Bristol garnered his first win of the season on opening night, so did Kolosek back on May 4, with both chauffeurs coincidentally returning to victory lane for the second time in the same show on Wednesday. However, the Marion teen’s follow-up feature race triumph needed all 25 laps to determine a winner while Bristol was in control for the duration.

“That was awesome,” exclaimed Kolosek, 18, after swapping the lead with race runner-up Jason Whipple twice on the final circuit to secure the thrilling $750 victory. “I saw Whip get by me in turns 1 and 2 there and I knew we were gonna have some fun. It panned out in my favor but I think we all had a good time tonight. It was a really good race, the track was mint … a little rough in (turns) 3 and 4 … but that’s what keeps it interesting.”

Trevor Years jumped out early from the point with fifth-starting Kolosek charging into second on lap three. Dan Craun fell off the pace in turn one to require the only yellow flag, and Kolosek took advantage on the lap seven restart to storm ahead using his favorite line on the high side.

Once out front the black no. 26J Mike Emhof Motorsports-Crossroads Automotive/GF1 winged machine opened up a comfortable margin over Years, yet by the midway mark 2017 track champ Whipple moved into second while reigning MEM 305 points king Darryl Ruggles throttled into fourth sporting a brand-new Eagle chassis.

As the laps dwindled so did Kolosek’s advantage, with Whipple suddenly turning it into a two-man show as Ruggles reached third still four miles from the finish. When chief starter Scott Hixson waved the white flag signaling one to go, Whipple ducked low across the stripe and carried the momentum past Kolosek entering the first corner. The favor was returned seconds later as Whipple slid high into turn two to relinquish the short-lived lead as Kid Kolosek sped on in dramatic fashion.

Despite a post-race protest and ensuing engine inspection by an Albany-based technician, Ruggles retained third-place on the final scoresheet. Two-time winner Erik Karlsen rallied to finish fourth ahead of Brandyn Griffin, still in search of win number one on the season.

“I saw (Whipple) show me his nose a couple times so I knew he was there. Knew we were gonna have some fun and it was gonna come out one of two ways, I definitely prefer this one. There was some traffic and a little fatigue at the end but we got through it and I’m happy about that. We went into the heat not really knowing what to do for a set-up tonight, made a couple changes and obviously it worked out good,” added Kolosek, who regained the division points lead over Karlsen, 462-442, followed closely by Griffin (438), Ruggles (436) and Whipple (430) entering the final full month.

A $500 winner’s share on the line was enough to attract to wine country full-fender veteran Pangrazio and the Oakfield invader made it pay dividends in dominating fashion buckled into his red rocket ship no. 7 T&D Investments-Royal T Trucking-CRS Ford Mustang.

Handicapped to the rear of the starting fields for both qualifying and feature in his first appearance of the year, Pangrazio charged from last to first to win his heat then needed just five circuits to advance from 12th and take the lead for good in the 20-lap nightcap, finishing ahead of Land of Legends lifer Adam DePuy.

“Not used to restarting on the backstretch, usually start out of turn four. Knew Adam was there and know he’s been pretty damn fast here. Have to put a new front bumper and nose on this thing after catching a rut in the heat, but other than that she ran pretty darn good,” Pangrazio said.

Pole-sitter Blane Smith led the first lap before a yellow flag flew when Saturday’s first-time winner Jimmy Grant got caught attempting a three-wide maneuver at the end of the back chute, dipping his nose under Brad Doty as Pangrazio held his line up high. Second-generation pilot Parker Smith exhibited little reverence on the restart, speeding past his father while another seasoned second-generation standout Marc Minutolo tagged along right behind.

Yet in a flawless foray to the front, Pangrazio disposed of Minutolo down the backstretch then swept around Smith in turns three and four and emerged as the new leader with 15 laps still to run. At the midway point the lead ballooned to a half-straightaway ahead of Minutolo and LOLR points leader DePuy.

Canandaigua’s all-time stock car winner Mike Welch cut a right-front tire challenging for a top-five spot on lap 18, causing just the second caution period and closing the gap for one final showdown. Pangrazio was unfazed by the sight in his rear-view mirror, motoring on to a convincing three car-length victory over DePuy who was chased to the checkers by Minutolo, Rick Crego and Quinn Sutherland.

There will be no oval track racing on July 27 during the fair, with the next ‘Saturday Spectacular’ slated for Aug. 3 at Land Of Legends Raceway. The lead-off show in August features a complete program of Pepsi Big-Block Modfied, Canandaigua Chrysler-Dodge-Jeep-Ram Sportsman Modified, Mike Emhof Motorsports 305 Sprint Car and Smith Bros. Drywall Street Stock racing plus round #4 of the Land of Legends 360 Sprint Classic Series.

As the 56th season begins its stretch run, be sure to follow the point standings and breaking news online by visiting www.LandOfLegendsRaceway.com. Advance sale tickets are also available for purchase online throughout the final months. Log into the website (LandOfLegendsRaceway.com), hit the red “Buy Tickets” button on the homepage, then make a selection from the list of dates & events highlighted. 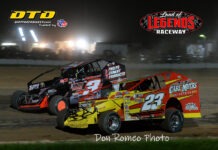