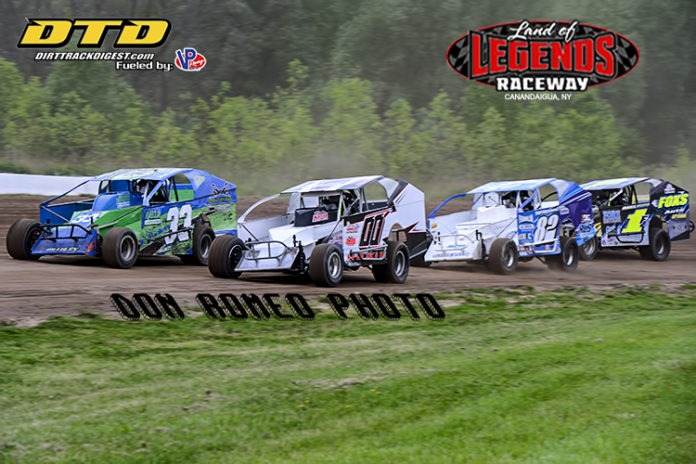 CANANDAIGUA, NY – Pit gates were unlocked, cars unloaded and hot laps clicked off just like they had done for so many early season test sessions staged at Land Of Legends Raceway.

Yet unlike any time before in the history of the Ontario County Fairgrounds oval, the grandstands sat empty and many participants were muffled by protective face gear —-helmets for the drivers—- on a most peculiar practice day.

Trackside activity certainly unveiled a ‘new normal’ this week as the recent coronavirus pandemic continued its stronghold on our accustomed way of life; from Canandaigua to California to China and nearly every place of global inhabitance in between.

“We closed the grandstands and concessions, no one was taking tickets, just teams coming to run some laps with their haulers parked farther apart to follow orders,” noted Cole, whose push to relax public restrictions and return to speedway business ended Tuesday evening with little fanfare to report.

“We all want to follow the rules but at some point we have to get the ball rolling and that finally happened today. Hopefully, its just the start and we can continue to build in the weeks ahead. Racing provides a good opportunity for the community to return to normalcy, something that can ultimately prove to be far more beneficial away from the track,” Cole added.

April 18 was LOLR’s original season-opening practice date —-first race slated for April 25—- before the rapid spread of COVID-19 led government officials to delay most public activity for several weeks. Rain and snow hit the Finger Lakes region the final two weekends in April as well as the first two in May, and with state mandates mirrored through the end of the month, June 2 was the first time racers were officially granted permission to check out equipment on the hallowed half-miler.

The initial mid-week practice period of nearly three hours that began at 6pm attracted 56 teams representing nine divisions with DIRTcar Sportsman standout Matt Guererri the first to turn a wheel on the seriously-smooth and ultra-fast clay oval. While some dust developed as the more than 230 truck-loads of new clay was tested for the first time, Lee Depew and the experienced grounds crew quickly remedied the situation resulting in a 16-second (111.892mph) fast lap time for 360 Sprinter Kyle Phillips towing east from his home in Grand Island.

Every class enjoyed a pair of practice periods with Sportsman taking a third session before rain forced the final checkered flag to be thrown at 8:45pm.

Despite the vacant grandstands, race enthusiasts relegated to home were still able to take in the first day of action that was streamed “live” via Land of Legends TV.

The LOLR camera crew is geared up to provide LIVE video coverage of every event exclusively through LOLR TV throughout the upcoming season. Download the LOLR mobile app found at Google Play
https://play.google.com/store/apps/details?id=com.goodbarber.landoflegends or
App Store
https://apps.apple.com/us/app/land-of-legends/id1508128970?uo=4 to secure your raceday pass today.

Loads of experience rock the tower on race night as the familiar duo of Steve Ovens and Doug Elkins man the microphones while Hall of Famers Gary and Donna Spaid and Sheila Darcy handle scoring and handicapping responsibilities.

Racers don’t have to wait long to return trackside as a second practice day is slated for Thr., June 4 with all gates once again opening at 5 p.m. and track time reserved 6-8:30 p.m. There will be no admission to the grandstand while the pit pass fee remains $20 for this final tune-up.

Gates open at 1:00pm for the full-fender portion of the program with the first qualifier going green at 2:30. Gates open at 4:00pm for open-wheel teams while qualifying and main events follow beginning at 7 o’clock. The pit pass fee is $40 for both afternoon and evening affairs.

*SPECIAL NOTE – With spectators away and a banner field of cars expected for the 2020 lid-lifter, entrance to the pits will be made through the main ticket gate utility road on the north side of the fairgrounds property.

Land of Legends Raceway is located on County Road 10 at the Ontario County Fairgrounds, just 1-1/2-miles north of Routes 5&20, and is easily accessible from the NYS Thruway (I-90), taking Exit 43 (Manchester, Route 21 South) traveling from the east or Exit 44 (Farmington, Route 332 South) coming from the west.