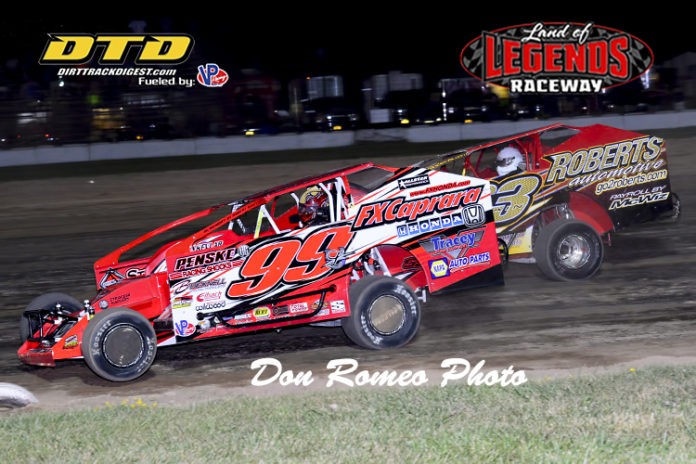 CANANDAIGUA, NY – Larry Wight is unbeatable at Land of Legends Raceway. On Thursday night Wight, of Phoenix, N.Y., captured his fourth big-block Modified feature of the season. In the Sportsman feature, Matt Guererri scored his third win of the year.

The mighty big-blocks roared to life for their 35-lap feature with defending Land of Legends track champion, Erick Rudolph, on the front row with Wight right behind him.

Wight challenged for the lead on several occasions, including pulling a slide job, in turn, one on lap 12, but gave it away in the next corner as the FX Caprara Honda No. 99L slid to the top side of the track, giving Rudolph back the lead.

Rudolph kept the lead until lap 20. As he was going through lap traffic, Wight made his move to the inside of turns three and four to complete the pass and take over the lead.

“The track had more moisture early on and then went back to the traditional slick top to bottom,” commented Wight. “I was trying to set Erick (Rudolph) up in lap traffic and when he bobbled going into turn three, I was able to shoot underneath for the bite and take the lead.”

Rudolph mounted a comeback, but could not get close as his Revive Spine Center No. 25 ran out of time, finishing second behind Wight.

“I had a tough time with lap traffic and Larry was able to get underneath me for the lead,” runner-up finisher Erick Rudolph commented. “It was great to see people get out and enjoy themselves tonight.”

Guererri had the pole in the 25-lap feature for the Sportsman and was quickly followed by Kevin Root, both searching for their third wins of the season at “The Land of Legends.”

There was one red flag during the night and that was for Rick Martin’s flip in turn one, with several other cars being involved. Martin climbed out of his car under his own power.

Guererri and Root put on a battle for the ages. The saying goes “anything you can do, I can do better” was certainly being said as Root tried several times to get by Guererri, but ‘Gibbz’ was able to hold him off to score his third win of the season.

“It gave me goosebumps after climbing out of the car to hear the crowd tonight,” Guererri said post-race. “It was great to see everyone back.”