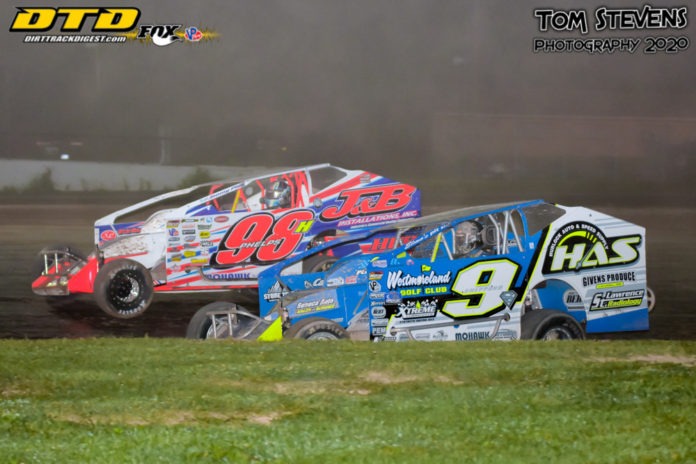 CANANDAIGUA, NY – Multi-time track champion “Super” Matt Sheppard returned to victory lane on Thursday night at Land of Legends Raceway. For Sheppard, it was career win 79 at the Canandaigua half-mile.

Kyle Coffey led Justin Wright on the opening lap of the 40-lap, $4,000 to win feature but it did not take long for Larry Wight to take the lead and take control of the race. On a lap eight restart, Matt Sheppard would move into second place and would start to go after Wight. Erick Rudolph would move up through the field and would move into third place after battling Jimmy Phelps after an early race restart. Wight would slow coming off turn four after contacting a lap car on lap 16, breaking an axel on his 99L. With Wight’s night coming to an abrupt halt, Matt Sheppard would inherit the lead. Several late-race cautions would cause for intense restarts as Rudolph would challenge Sheppard for the lead. On the last lap, Rudolph went to the extreme outside and went over the edge of the track, losing a couple of positions and giving the win to Sheppard. Jimmy Phelps would finish in second with Billy Decker, Rudolph, and Alan Johnson completing the top five. 32 Modifieds signed in pitside.

“We were fortunate to hold off Erick (Rudolph) tonight”, stated Sheppard in victory lane. “The car just wouldn’t turn and it’s strange”. Sheppard was handling a tight racecar all night long. “You are better off just slowing down and make sure to hit your marks”, Sheppard added. “I cannot thank call of our sponsors for their support”.

One Modified driver who was making his debut at Land of Legends Thursday night was third-generation driver Jimmy Zacharias. Jimmy’s night ended on lap nine of the main event after having issues in his Midstate Basement Authorities 71. Before switching to the dirt full-time a couple of seasons ago, Zacharias was one of the top asphalt drivers in the Southern Tier and was a multi-time track champion at the Chemung Speedrome.

Nick Guerreri would take the lead on lap 11 in the 25-lap Sportsman feature. Matt Janczuk would move into second on lap 15 and would challenge Guerreri. Kyle Inman moved up through the field and would move into the top three on a lap 16 restart. Kevin Root was running in the top five most of the race but slowed entering turn three to bring out the caution mid-race. Inman would go to the outside of turn four to take the lead at the white flag, but it was Janczuk being able to get around him and then holding off Inman to score the win. Nick Guerreri would finish in third and be followed to the line by Alex Payne and Zach Sobotka. Early race leader Torry Stoughtener finished in sixth, just ahead of recent winner Matt Guerreri.

“This place had me due for a long time”, stated Janczuk in victory lane. “It is my first win here and it is bad that the fans weren’t here as it was a great race”, Janczuk added. Like Matt Sheppard in the Modified race, Janczuk was also handling a tight racecar. “My car was tight in three and four and I knew I had to move around and on the last lap, we ran a perfect lap”.

Runner-up finisher Kyle Inman noted that the outside was the fast away around “The Land of Legends”.  “We had a bad redraw and we got to the top early and were able to ride around. The top side came around with 10 to go and got up there on a restart and the car started to roll really good. It’s heartbreaking for sure not getting the win, but had a good points night for the DIRTcar Hoosier Tire Weekly Racing Series Points.”

Wheatfield, NY’s Noah Walker scored the win in the Sportsman B-Feature. It was Walker’s second B-feature win of the season. “It’s not the way we want to win as we want to win the A-main, but it is all about getting more laps”, Walker said. A total of 37 Sportsman signed in.

Jimmy Grant was able to hold off all the challenges thrown at him by Mike Welch to score his third Street Stock win of the season. Grant took the lead off the start of the race and led all 20-laps to pick up the win. Entering Thursday night, Grant only led six laps all season. 17 full-fendered machines took part in the main event, paying $500 to win.

Land of Legends Raceway will be back in action on Saturday, August 22.