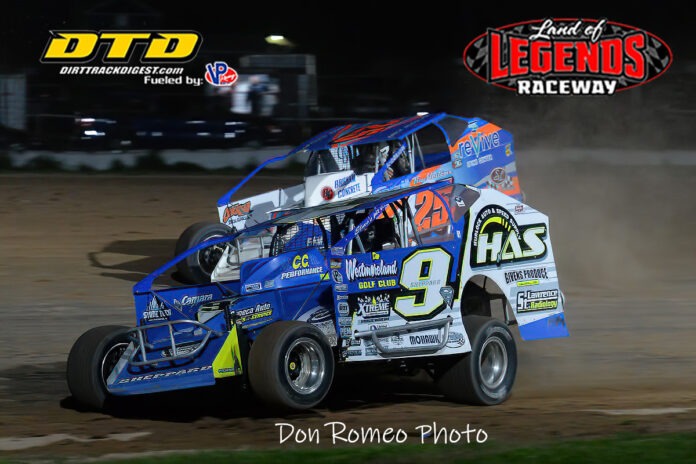 CANANDAIGUA, NY – Matt Sheppard is no stranger to Land Of Legends Raceway Victory Lane. It did not take very long for Sheppard to continue his long-standing winning relationship with the speedway, as on Saturday night the 9s found itself parked in victory lane in a dominating performance to open the track’s 58th season.

Rookie to the Modified class Garrison Krentz and Sheppard would lead the Modified field to the original green flag. A quick yellow would see an original restart, which saw Sheppard power around Krentz to the lead by the time the field had entered the back straightaway.

A violent crash occurred as the field came to complete lap one. Lance Dusett and Kyle Coffey made contact on the front straightaway, causing Dusett to make contact with Adam Roberts, who climbed the wall and flipped violently down the front straightaway. James Sweeting, Marcus Dinkins, and Jimmy Maier were collected in the accident. Fortunately, all drivers were okay, but only Jimmy Maier’s car was able to continue, with Roberts and Sweeting’s car suffering major damage. Maier would recover from the damage to bring home a 14th place finish.

After the wreckage was cleared, the field took another restart that once again saw Sheppard streak ahead of Krentz on the exit of turn 2. Sheppard was closely followed by eventual second place finisher Erick Rudolph. Rudolph, coming off a win in the 358-Modifieds at Ransomville on Friday, started seventh and quickly made his way up to 2nd place behind Sheppard. A quick caution came out for Eldon Payne, as the driver out of Hopewell, NY slid into the infield on the backstretch with the left front suspension broken on his car. On the ensuing restart Rudolph originally kept with Sheppard, but he did not have any kryptonite for Superman. As the rest of the race went green, Sheppard’s victory came with just over an 8 second gap back to Rudolph.

The rest of the top five came from mid-pack starting spots. Justin Haers started 10th and finished third, working the top side of the speedway to slice his way through the field. Peter Britten came from the 12th starting spot and would battle his way through the field to claim a fourth place finish. Garrison Krentz would round out the top 5 to cap a solid night for Krentz, who is part of a group of former Sportsman drivers that have moved up to the Modified ranks over the past few years. Although, Krentz would have been fourth. Coming to the checkered flag, Krentz’ car came out of gear, allowing Britten to claim fourth at the line. Alan Johnson finished in sixth and as the last car on the lead lap, as Sheppard lapped most of the field.

“We were on a roll tonight”, said Sheppard in Victory Lane. “There’s a couple of adjustments that have to be made, but the car was really good overall.”

Sheppard’s win moves him to fouth all-time in the Land of Legends Raceway record books at 82 career Modified wins. This breaks the tie he had with Danny Johnson, who now sits fifth with 81 career wins. Sheppard now stands alone in fourth place, only behind Steve Paine (94 wins), Bob McCreadie (99 wins), and Alan Johnson (124 wins). Tonight’s win is Sheppard’s 7th season opening triumph at Land of Legends, with his most recent opening night victory coming in the 2019 season opener.

Embarking on his second season as a weekly racer at Canandaigua’s hallowed half-miler, Sobotka showed once again why he remains among the men to beat after securing opening night honors in the Sportsman class. The quiet campaigner from Parish wrestled away the lead from all-time LOLR Sportsman winner Paul Guererri then held off a late-race rally from nephew Nick Guererri to earn the $1,000 top prize in the 25-lap finale.

“We were definitely pretty close last night at Brewerton so its nice to get the win here,” downplayed Sobotka, 20, who claimed a pair of checkered flags in last summer’s virus shortened season en route to tying Matt Guererri atop the final points chart. Guererri won a division-high five features to take the tie-breaker.

On this night the no. 38 Stirling Lubricants-Stoneburg Construction-Mohawk Northeast/Bicknell ride would not be denied, forging the lone lead change from pole-sitter Paul Guererri on lap seven after the pre-race draw relegated Sobotka to sixth on the 28-car starting grid.

Shadowing Sobotka from lap one, Nick Guererri swept around his uncle in turn four to grab second on lap 13. A pair of yellow flags on lap 17 put the leaders bumper-to-bumper and after Sobotka sprinted ahead, Guererri crept to within a car-length as traffic tightened the gap on the final circuit.

“(Leading) is pretty much where I lost the race last night. Its not always the best thing leading, especially early,” Sobotka added. “Tonight I just found the line up top in turns one and two pretty early, started rolling the bottom then the caution came out. It was dusty up top in (turns) three and four so I figured the bottom was still going to be there at the end of the race. Did not know Nick was gaining the last few laps, just tried to go where the lapped cars weren’t at the end.”

Chasing Sobotka and Guererri across the stripe were Matt Guererri, Alex Payne and A.J. Lloyd, with Zach Payne grabbing sixth from Paul Guererri in the closing stages.

Looking to improve one position in the point standings, Grant made an early statement in the Street Stock ranks after a dominating performance aboard his Chevrolet Camaro sporting a brand new CRS chassis.

“Was way faster and was tired of waiting so I switched up high and that was it,” beamed Grant, 36, who started third and stayed patient before blasting by Marc Minutolo for the top spot then cruising home to win the headline 20-lapper by a straightaway. “Thought I was going to spin out Marc when I had such a run on him but didn’t want to do that. I rolled the center, could really put the car anywhere and went right around. This car man, we’re going to the top.”

Pole-sitter Minutolo and front row partner Rick Crego, who bought the former CRS ride from 2020 titlist Josh Pangrazio at season’s end, paced the 19-car full-fender field early before Grant rushed into high gear. Scoring three wins a year ago to finish second behind Pangrazio in the standings, the popular Penn Yan pilot edged past Minutolo on lap eight and was never challenged in the caution-free affair.

“We fought all night, we’re in and out of the line-up trying to get the car to stay cool. Had a little air in it but we worked it out,” said Grant, revealing that air had gotten in the car’s cooling system system and not allowed any circulation. “What else can you ask from it? First time racing here, couldn’t ask for a better race car.”

“We pulled the top off the expansion tank, jacked it up, had her wide open and pumped the air right out of her. There’s a light that comes on at a certain temperature and when that light comes on I look at it. If not, we’re sending her,” Grant exclaimed.

No light, no problem as the expansion tank, which absorbs excess coolant and minimizes excess pressure in the engine cooling system, did its job. And so did Grant as his sleek black #36 Hands Performance & Powder Coating-Washburn Excavating entry stayed cool under the hood while the driver poured on the coals.

Minutolo held off all-time LOLR Street Stock winner Mike Welch while C.J. Guererri slipped by Crego to round out the final front-five ahead of the family duo of son Parker Smith and his father Blane Smith.

“Really feels good for Tommy and I,” said Parrow, 52, who scored both of his A-Main 305 wins last year on the same night at LOLR. “We didn’t do too much to the car over the winter, just took the car to Loren Lincoln for welding and had to have a tube on the frame straightened out after bending it a little last season. Some new tires and fresh fuel was really about it after that.”

Matt Rotz and Jacob Lynch tangled in the first turn to force out another yellow flag with 16 laps still to go yet this brief slowdown erased a short-lived lead taken by Bay on the restart. Bay repeated her maneuver around Parrow high in turns one and two  and this time was officially scored first a quarter of the way through. But Parrow from Waterloo wasted no time rebounding and made the final pass broadsliding out of turn four one lap later.

“Trying to get better on restarts, have to figure things out,” said Parrow, with his team utilizing a 4-year old engine originally prepared by Ray Preston. “Once we get the motor program straightened out we should be okay. Probably miss a couple races at Canandaigua this year driving a 360 but we’ll still be here a lot, its always a lot of fun.”

At the halfway mark of the 20-lap feature Parrow built up a seemingly comfortable 10 car-length advantage over Bay with the top-5 running equi-distance apart under and around lapped traffic. And with five to go the margin ballooned to over a half straightaway.

Yet suddenly the lead evaporated when turn two contact on the last lap between Parrow and Pierce opened the door for Bay. The difference was just 596-sec. at the line, although still good enough for Parrow to hang on for the $600 victory. Ruggles, Brandyn Griffin and Ethan Gray settled into top-5 spots at the wire.

Entry level Hobby Stockers provided the opening main event of the show, with a dozen cars featured in this fast growing division. The heads-up start pitted heat winners Eldredge and defending points champion Tyler Burnell in row one and that’s the way it remained all 15 laps.

“Its a brand new car. My dad put a lot of time and effort into it and it really showed tonight. Definitely great having the fans back, missed you all last year,” added Eldredge, posing alongside his no. 25J Eldredge & Sons Scrap Recycling-Big Mike’s Auto-LaRock Logging & Firewood Chevrolet Monte Carlo parked in victory lane for the very first time.

Just two car-lengths separated the Waterloo pair at the stripe while third-starting Brian Lloyd finished where he began followed by Jeremy Trank and Minutolo.

The second ‘Saturday Spectacular’ of the season arrives May 22 with another fabulous five-star card filled out by Pepsi Big-Block Modified, Speed Connection Sportsman, Eldredge & Sons Scrap Recycling Street Stock and Lloyd’s Contracting Hobby Stock action along with the Mike Emhof Motorsports 305 Sprint Cars competing in the first of three CRSA tour events scheduled at the fairgrounds.

Pit gates swing open at 3:30pm, spectators are admitted at 5 o’clock, hot laps start at 5:30 and the first qualifier goes green at 6:30 sharp on VanBortel Trucking and Sherwin Williams Paint Night at the speedway.