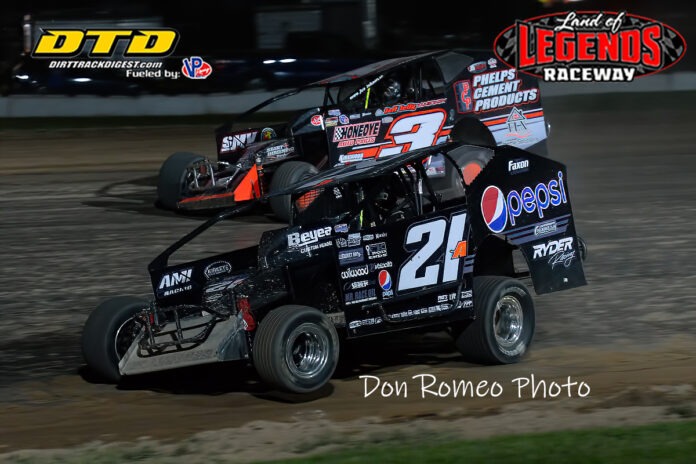 “I may not have kryptonite but I’ve got Pepsi on board so maybe that’s it,” smiled Britten, 33, referring to stopping ‘Super Matt’ who made his 400th trip to victory lane in last weekend’s ‘Saturday Spectacular’ at LOLR over the Memorial holiday. “About time somebody beat Sheppard here.”

Of his 95 career open-wheel feature wins at the fairgrounds, including a solo Small-Block win in 2004, Paine took 52 of those Big-Block checkered flags at the revered Ontario County oval from 2000-2010, ushering in the new millennium by capturing the coveted overall Mr. DIRT Big-Block Championship. Reaching Canandaigua’s exclusive winner’s circle the last time in September of 2018, his reign of dominance was most prevalent in registering his 11th Big-Block point crowns at the Land of Legends in 2010; nine straight track titles were garnered from 2000-2008.

With a résumé now including well over 300 feature wins at nearly 30 speedways around the Northeast, along with 23 Super DIRT Series wins and over 30 track championships added along the way, Paine was inducted into the Northeast Dirt Modified Hall of Fame in 2017. Also a two-time overall Mr. DIRTcar 358-Modified champion, Paine joins elite racers Brett Hearn and the brothers Alan & Danny Johnson, as the only drivers to capture DIRTcar Racing Northeast’s most coveted titles in both Big-Block and Small-Block divisions.

Slick track conditions proved to Britten’s liking as ‘Batman’ flew past all-time Canandaigua feature winner Alan Johnson on a lap 16 restart in the headline 35-lapper and never looked back steering the potent black Billy The Kid-powered no. 21A Pepsi-Ryder Racing-Beyea Custon Headers/Bicknell entry.

“Sometimes to go faster you have to go slower,” figured Britten, following his sixth career win at the fairgrounds. “I was trying the whole race, at some points there was hitting my marks better than others. Always tough to start on the outside so when I got by Alan was kinda surprised, but that was just a testament to the strength of our car able to get a good jump there.”

“We’ve been slowly building up, been playing around trying to feel what’s right here. Definitely made the right moves for the feature tonight. Just ecstatic to be here, been a tough weekly going over at Lebanon Valley on Monday then breaking my phone on Wednesday,” Britten said.

Big-Block rookie Torrey Stoughtenger led his first laps at the fairgrounds from the pole-position before yielding to front row partner Jimmy Maier the second time around. Alan Johnson rocketed from fifth to first in just four laps with 7th-place starter Britten grabbing second as five laps flashed on the Elab scoreboard.

Britten sped past Johnson on both occasions and despite two more setbacks —- spins by Robbie Johnston (lap 20) and Daniel Johnson Jr. (lap 30) —- never flinched as only his nearest challengers traded paint the rest of the way.

Haers and Sheppard charged past Johnson on the second lap 16 restart while Rudolph slid into fourth at the halfway mark. Sheppard grabbed second on lap 19 followed closely by Rudolph, who dove under ‘Super Matt’ for the runner-up spot on lap 24. Matt Farnham made his presence known by overtaking Johnson for fifth with 10 laps still to go and when Daniel Johnson broke on lap 29, ‘A.J. Slideways’ night came to an end as he sat parked with the rear-end of his #14J mount riding low at the turn three pit entrance.

Back under green Britten opened up a commanding lead over Rudolph while Sheppard and Haers swapped positions over the final five laps. At the wire it was ‘Pepsi Pete’ scoring a convincing six car-length victory over Rudolph as Sheppard regained third by a bumper under the checkers in front of Haers and a high-flying Farnham.

“I didn’t see (Rudolph) but you look at the (score) board and you think ‘boy, the hounds are coming,’ just had to try and hit my marks and hope its good enough, that’s all I could do once out front,” added Britten, noting the joint effort from Geneva Club Beverage/Pepsi and continued support from Rich Scagliotta and girlfriend Randie enabled his return to LOLR full-time in 2021. “It was tricky, the line is very hard to hit, that’s why Matt seems to dominate here because he’s really got that figured out.”

“Was talking to someone tonight about Matt having to be beaten at some point and I said there’s always a chance. We’ve done it before, definitely possible to happen again but to be honest wasn’t expecting it tonight with everything going on the past week,” Britten said.

While less than a handful of yellow flags kept the Big-Block field in check for the distance, action in the 25-lap Sportsman main event was curtailed by a half-dozen caution periods over the first 10 circuits. Payne was able to avoid every shake-up in the early stages, advancing from 13th to third in the opening five laps until blasting by race-long leader Nick Cooper before half the race was complete.

“Tonight our car was going good and we were able to pass cars going around the top,” downplayed Payne, 20, now in his third season contending at Canandaigua in the open-wheel ranks buckled into the blue #7Z MP Delivery-Page Trucking-Honeoye Auto Parts/Bicknell car. “Didn’t have to hug the bottom like everybody else so it worked out pretty good.”

Third time was a charm for the 29-car Sportsman field as it took three tries before Cooper could lead the opening lap from his outside front row starting assignment. Turn four contact between Tim Lafler and Timmy Borden Jr. on the original start sent Lafler sideways and the trailing pack reeling directly behind while fourth starting Sam Hoxie got turned around heading down the back chute to force Ricky Newton and Rich Vinson into the pits without a single lap complete.

Points leader Zach Sobotka slowed in turn four to force Troy Sperring off the gas and to the infield with the first lap finally scored, yet only six more green flag laps could be run before three additional caution periods ensued. Teenage traveler Greenley George looped her ride in turn four, Sperring was knocked off the track in the first corner and Tony Velez got turned around in turn four to force Race Director Greg Hixson to line up the restless group of racers single file for the third lap 9 restart.

For the second straight week hard luck driver Cooper slowed to incur another caution with 10 laps to go. Yet to secure the elusive victory, Payne still had to endure one more yellow on the final lap when Lafler went around for the final time in turn two. Remaining unfazed by the fallout, Payne finished 10 car-lengths ahead of runner-up Paul Guererri and a hard-charging Zachary George while Matt Guererri rallied to place fourth ahead of older brother Nick Guererri.

“Knew I needed to get out to the line where I was fast which was around the top in turns one and two. After that the car just kept rolling good, got into a rhythm and here we are,” said Payne, who joined Matt Guererri at 224 points just four markers behind two-time winner Sobotka (228 pts.) in the standings after four events. “After that, just stay focused and keep cool, your mind can get away from you at times.”

“This means everything, been wanting to win here for a couple years ever since I started. Have to thank my dad (Mike) for giving me everything to be here right now. Also have to thank my crew guys, Nick and Alan, they came on this year and last and have been a big help,” added Payne, who became the 118th different winner in 627 Sportsman events staged at Canandaigua since the division debut in 1987. Logging his first in 1997, runner-up Paul Guererri is the all-time leader with 45 wins.

Grabbing the lead from pole-sitter Blane Smith on lap two and leading the rest of the way, Steinruck was destined to etch his own name in the Canandaigua record book. Yet after taking the checkered flag in the 20-lap Street Stock feature, this second-generation driver will have to wait another week after an illegal rear spring location was discovered in his No. 510 Chevy Camaro.

All drivers moved up one position on the final scoresheet, awarding 47 year-old DePuy with his 47th career triumph at Canandaigua where he was crowned points champion 2017-19. Steinruck received last-place points and money but the rear-end spring penalty kept him from joining his father Brad Sr. on the track win chart.

Matching his first career victory to kick off the 2021 season in mid-May, Eldredge adapted quickly to the slippery surface to best seven hungry entry level challengers in the 15-lap Hobby Stock feature.

In a second three-wide maneuver down the homestretch on the ensuing restart, Eldredge (low) and Wagner (high) sandwiched Brian Lloyd in a heated battle for second before Wagner’s no. 42 ride slowed in turn one to bring on the yellow lights.

Trank could only hold back the advances of Eldredge for a half-mile longer as the Waterloo pilot got the needed bite low exiting turn four to take the lead on lap six. Trank suddenly dropped off the pace, falling to fourth behind Lloyd and Burnell on lap 11, then pulled pitside for good with three to go.

Oles broke in turn one to bring out the final yellow flag on lap 13. Under green Eldredge was unbeatable in his #25J Eldredge & Son Scrap-Big Mike’s Auto Chevy Monte Carlo, outdistancing Lloyd by 10 car-lengths followed by Burnell, Willy Grant and Wagner.

“Definitely good tonight, been having a couple bad weeks here and over to Outlaw (Speedway, Fridays) so it feels good to get back to victory lane,” remarked Eldredge, 23, who closed to within six points, 220-214, of Burnell in search of the coveted title. “Usually try to protect whatever lane you think is best and the bottom is always the way to go here. Its just so tough to get these hard (compound) tires hooked up.”

“Think something went in Jeremy’s left rear, either a shock or spring, saw his car was getting over on the right front a little more than it should’ve been. I have to thank Jim LaRock, he helped out with a carburetor issue and we made it back.”

A raffle to benefit the South Farmington Cemetery Foundation will also be held during the night, with proceeds helping to fund the restoration & preservation of the historic chapel building located at the nearby cemetery.

Practice kicks off the ‘Saturday Spectacular’ at 5:30pm followed by heat race qualifiers starting promptly at 6:30pm. Pit gates open at 3:30pm and spectators are admitted into the main grandstands at 5 o’clock.

SKIDMARKS
If you can’t make it out to the race track this season, LIVE video coverage of every event can still be enjoyed weekly through Land of Legends TV as for the first time ever all LIVE streaming will be offered FREE in 2021. On-line registration at https://landoflegendstv.com/orders/customer_info for a free account is the only step to take.

Also available for download is the LOLR mobile app found at Google Play
https://play.google.com/store/apps/details?id=com.goodbarber.landoflegends or
App Store
https://apps.apple.com/us/app/land-of-legends/id1508128970?uo=4 to secure your raceday pass today.
In 2021 weekly ticket prices are set at $15 Adults, $13 Seniors, Kids under 16 FREE. For those youngsters needing pit access, Child Season Pit Passes are $30 for 2 & Under and $150 for kids 3-14. Camping is FREE at all race events. To purchase ticket and pit pass bundle packages in advance or discuss marketing opportunities available at the track this season, please contact LOLR Marketing Director Tana Robinson via e-mail tana@landoflegendsraceway.com or cell 716-799-5669.

With the 58th season now officially underway, be sure to follow the point standings and breaking news online by visiting www.LandOfLegendsRaceway.com.