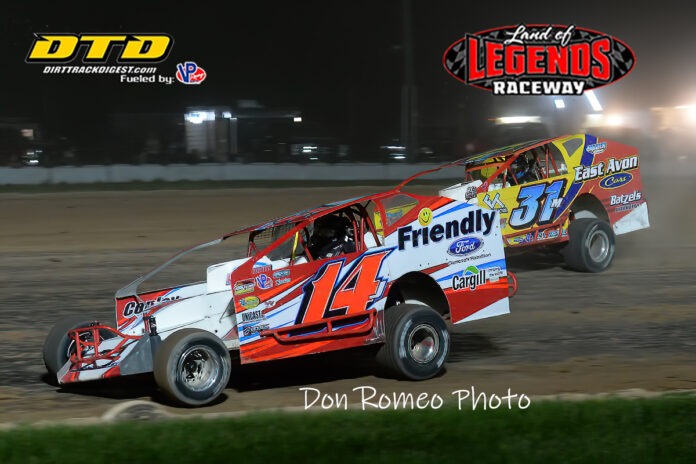 CANANDAIGUA, NY – Like a fine wine savored with the passing of time, ageless Alan Johnson broke into the winner’s circle once again, capping off another ‘Saturday Spectacular’ at Land Of Legends Raceway that showcased both youth and experience from start to finish.

“This feels great,” remarked Johnson, now 63, yet revealing no sign of slowing down in his sixth decade touring the hallowed half-mile clay oval in Canandaigua. “Was good to start on the front row and not have any yellows. But this is still the best car I’ve had here in a long time.”

Suffering through mechanical woes the past two weekends, Johnson was in prime position to turn the tables from his front row start in the 35-lap Big-Block feature. A first lap mishap that ended with Marcus Dinkins parked on the frontstretch forced out the lone yellow flag and that was all that could stall ‘A.J. Slideways’ strategy en route to the $2,000 payday.

“Wasn’t really watching (scoreboard), without any yellows I didn’t think those guys could come up through but I heard Rudolph did, never saw him. I felt awfully good, thought if he’s better than I am than he deserves to win. But the car just felt awesome,” noted Johnson, who made his maiden trip to LOLR in 1974 and earned rookie-of-the-year acclaim before notching that inaugural fairgrounds feature win on May 3, 1975 steering the home-made Ewing Corvair-bodied big-block.

Buckled in behind the wheel of owner Mark Spoor’s familiar no. 14J Friendly Ford-Cargill-Conley Farms/Bicknell entry 46 years later, the result was the same.

Yet Rudolph never let the fans leave their seats, charging from eighth starting spot to overtake runner-up Garrison Krentz on lap 16. During the second half of the race he forced them to the edge as he crept closer to Johnson with laps clicking off.

Once building up a three-second advantage before Rudolph found his way to the front, the margin was wittled down to only five car-lengths as chief starter Scott Hixson signaled just a handful of laps to go. When the white flag finally unfurled Rudolph had pulled up to the bumper of the #14J Bicknell machine, but it was the 5-time track champ clinging to victory by a car-length when it mattered most.

“Felt like the track was getting more slippery, wasn’t quite as good at the end of the race as I was at the beginning,” divulged Johnson, from Middlesex, who also owns trophies for a pair of DIRTcar 358-Modified wins logged at LOLR in 2005. “But I figured it was the same for everybody else so I just kept digging. I knew a couple guys run so well here I couldn’t slow down.”

“The car felt like it was bouncing a little more than when it started out. We’re on a new shock program with Dig and the car has just been gradually getting better and better. Mark just keeps this race team going, gotta hand it to him. He realized we needed some different shocks and he just went out and got ’em for us,” added Johnson, who hinted that a new car is coming yet the completion date is uncertain.

Although falling just shy of collecting his first checkered flag of the season, Rudolph’s fifth top-5 finish in as many events vaulted him to the top of the points chart with 294. Registering his second front-five feature finish of ’21, Krentz closed out a stellar run in the show position followed by Justin Haers and Peter Britten.

Also in search of his first victory this year, Haers (282) sits second in the early season points chase ahead of Britten (272) while Johnson improved to seventh.

While routine victory lane appearances fill the Johnson legacy, the first-ever trip for young gun Payne was the thrill of a lifetime at his Saturday night summer hangout.

“Oh my gosh, I’m gonna cry, I’ve wanted this for so long … its amazing” beamed an emotional Payne, 15, who was joined by his father Eldon Jr., himself a 7-time Sportsman winner at Canandaigua, and sister Kennedy, herself an open-wheel rookie this season at age 13. “Watched at this place since I was a little kid, never dreamed I’d be out here, can’t thank everybody enough.”

Reality set in fast for Payne as the Hopewell hotshoe took advantage of early caution periods to advance from 12th on the starting grid and up to first just five laps into the headline 25-lapper. Andrew Smith broke a driveshaft on the opening circuit, Troy Sperring spun down the back chute while a multi-car tangle involving J.T. Sperring and Frank Guererri Jr. slowed the action in the early going.

A lap five restart was all Payne needed to grab first from Nick Cooper and the black #70A Speed Connection-Emerson Oil/Castrol-Friendly Dodge Bicknell mount was on its way despite more yellow flags keeping the pack close behind.

“Was just rolling around, didn’t really know if the top or the bottom was faster,” said Payne, a past B-Main winner who finished 11th in last season’s pandemic-shortened points chase with two top-5 feature finishes. “If I could carry the speed through the middle I’d be okay.”

Battling for third-place at the halfway mark, Nick Guererri and A.J. Lloyd hooked bumpers to incur the fifth yellow flag, moving top point contenders Matt Guererri and Zach Sobotka solidly into the front-five back under green. Payne and Cooper continued to battle up front while Zach Payne and Paul Guererri tracked down Sobotka to thwart his effort for a third win in 2021.

Challenging among the leaders from the initial green, upstart Sam Hoxie spun in turn three on lap 13 to end any chance at his first top-10 of the season. The last eight laps ran off caution-free, giving Payne his popular win by three car-lengths over defending points champion Matt Guererri.

“I saw Nick on top of me over in (turns) one and two and I said that’s it, I’m moving up there the rest of the way,” added Payne, on this night 48 years younger than his fellow open-wheel winner Johnson, who was 17 when he won his first race. “I could run the bottom in three and four, but this car was just so good everywhere.”

Guererri’s (283 pts.) runner-up tally was good enough to regain the points lead over Zach Payne (276), who finished fourth chasing Cooper, and Sobotka (276), who fell to sixth behind Paul Guererri at the stripe.

Filing into fifth in the 20-lap MEM 305 A-Main, Griffin made quick work of front row starters Dan Craun and Jason Whipple, leading the final 19 circuits to score the $750 win in winged competition at Canandaigua.

“The outside (lane) was a lot slicker than I thought it would be,” noted Griffin, 23, who posted one feature win in each of the past three seasons. “The bottom had some moisture down real low so I stayed right in that and hoped for the best.”

A three-wide dash afforded Whipple a short-lived lead on lap one before Griffin blasted underneath exiting turn four to show his intentions early. The father/daughter duo of Darryl Ruggles and Alysha Bay joined the fray, dropping pole-sitter Dan Craun to fifth after five laps around.

Matt Rotz brought out a pair of yellow flags by the halfway point, bringing Ruggles and Bay closer to Griffin while Whipple, Jordan Hutton and Bobby Parrow diced for position further back. With the final 11 laps run under green, the stage was set for a titanic battle up front.

At first, Griffin and Ruggles were able to pull away from the pack, yet with five laps to go Whipple made it a three-car confrontation. After gaining ground quickly up top, Whipple finally out-snookered a sliding Ruggles as he dove low out of turn four to snag second entering the final lap. The last half-mile was all Griffin in his black #75 Jimmy D’s-powered Tri-County Excavating-SVRA Eagle as the Clifton Springs pilot held on for a narrow four car-length margin under the checkers.

“Was dreading the lap cars near the end, with 5 to go was gaining on them, then with 2 to go thought ‘man, hope this can finish before I catch them’ because it might get tough in traffic. Fortunately things worked out,” Griffin added.

While Griffin added his fourth career 305 win, Grant nailed down his fourth win in five outings this season in Ontario County. The latest triumph for the Penn Yan wheelman capped off a late-race rally in Canandaigua’s top full-fender division.

“Early in the race didn’t think we had anything for them, then I got pissed off and drove her. That caution definitely helped out but the way I was driving that thing in there, it just stuck right there and we took her to honky tonk town,” Grant said.

Jared Hill led his first lap of the season before seventh-starting C.J. Guererri ducked under the second time around. Falling in ninth on the grid, Welch was just as quick, grabbing second while Adam DePuy mirrored the move into third on lap three.

Looking for an opening on the inside, Welch inched ahead for the first time as Guererri barely slipped high out of the groove in turn four to complete lap 13. Pat Hobbs spun between turns three and four and the ensuing lap 14 restart was all Grant needed as he went from fourth to second even before reaching the flagstand then disposing of Welch flying around the high side over the next quarter mile.

Guererri finished a strong third in the 20-lap feature followed by Marc Minutolo and DePuy.

“Been talk of moving up (in class) but I’m never gonna get rid of this car. My kids are gonna win features in this thing,” added Grant, who performed double duty on Saturday, getting behind the wheel of the #55 Nardozzi Paving & Construction Bicknell ride for regular Sportsman driver Mike Nardozzi. “We’re gonna win this championship then we’re going up to a big-block.”

Just as Grant continues to eye his first track points title in wine country, second-generation chauffeur Burnell from Waterloo remains focused on defending his own crown in the entry-level Hobby Stock division.

“Another championship, that’s the plan,” declared Burnell, 19, posing for a second time in ’21 alongside the no. 57jr. L&S Services-Peck Electric-Phelps Cement Products Chevrolet Camaro in LOLR victory lane. “This car is amazing, can’t thank all my sponsors enough and all those who help out.”

Burnell sped into third halfway through, overtaking Lloyd for second with a handful of laps to go before throttling past Minutolo on the high side as the leaders navigated through turns one and two on lap 11. Minutolo suddenly pulled to the homestretch infield with a suspected fuel delivery issue, opening the door for teammate Lloyd while Casey Wagner, Trank and Eldredge rebounded to secure top-5 finishes in the 15-lap finale.

“I’m not gonna follow the leader, found the middle and high lanes that worked the best and I stayed on it, drove right around them,” said Burnell, describing his latest path to victory at the fairgrounds. “Beginning of the race, its all over the place racing then it starts spreading out. You just do what you gotta do after that, its a whole different game.”

A Waterloo Library and Historical Society Benefit raffle will also be held during the night with practice sessions kicking off on-track activity at 5:30pm. Heat race qualifiers for all five divisions go green at 6:30pm with pit gates open at 3:30pm and spectators gaining admittance into the main grandstands at 5 o’clock.