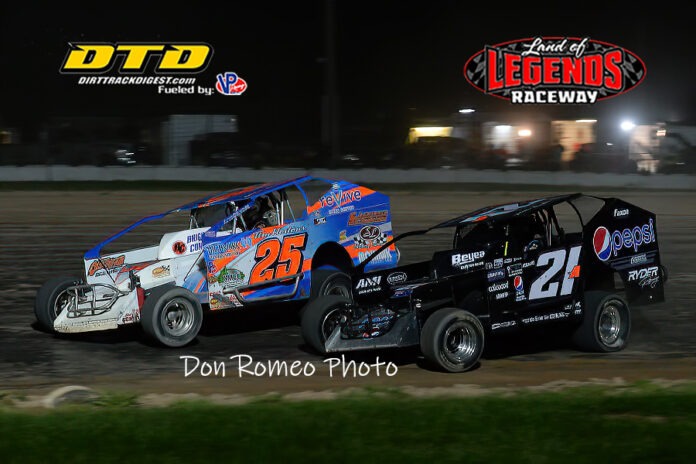 CANANDAIGUA, NY – Recent rain and the threat of more over the weekend did little to derail point leaders Erick Rudolph, Jimmy Grant and Justin Eldredge as the top trio returned to victory lane in the Saturday Spectacular presented by Always Locked Self Storage at Land Of Legends Raceway.

Both Rudolph (Pepsi Big-Block Modified) and Grant (Eldredge & Sons Scrap Recycling Street Stock) made it two in a row since their July 10 triumphs while Eldredge began his current streak of four straight Lloyd’s Contracting Hobby Stock victories in June.

It was also Family Autograph Nite at the speedway with hundreds of fans flocking from the grandstands to the track before qualifying for a unique meet-and-greet with their favorite racers on the homestretch. Trackside interviews with many of the drivers in all classes were conducted by Marty Czekala while Doug Elkins returned to a familiar post up in the scoring tower to emcee action throughout the show. Weekly racer Jamie Eldredge Jr. was a headliner for the kids as he donated a pair of bicycles that were given away to a lucky boy and girl in a drawing held after the Hobby Stock division feature.

While it took Rudolph eight events to break into the winner’s circle, the second-generation stud needed only 12-minutes to take care of business in the fast-paced caution-free feature for Big-Blocks on Saturday.

“(In front) you just hope the race stays green, focus on hitting your marks out there and run a solid race,” stated Rudolph, in quest of a second track points title at the hallowed half-miler. “Thanks to everybody that helps out in the shop and on the road, along with all my sponsors here on the car that help get the job done.”

Rudolph finished off the job in rapid fashion, starting 12th in the 20-car field before blasting high out of turn two to grab the lead from pole-sitter Lance Dusett on lap 16. From there the ridgerunner from Ransomville put his #25 reVive Spine Center-Blue Cross/Blue Shield-Mohawk NE-NMCC Bicknell mount on cruise control and led the final 20 laps uncontested.

“Really not much (cushion) up high, maybe a little bit coming out of turn two and down the backstretch but other than that the top was pretty burned off,” noted Rudolph, after matching legendary driver Dutch Hoag with 12 career wins in Canandaigua. “Seemed like the car really wanted to be on the bottom. It was really on rails tonight, just a testament to the team, the crew and all of our supporters.”

Dusett diced with Daniel Johnson Jr. in the early stages as Rudolph methodically worked his way forward in the 35-lap Modified main. The 2018 track champ cracked the top-5 with eight laps complete and rolled into third on lap 12 before overtaking all-time LOLR winner Alan Johnson for the runner-up spot three laps later and disposing of Dusett the next time around.

Navigating in and around traffic the second half of the race, Rudolph showed little concern for his counterpoints as the advantage ballooned to more than a straightaway under the checkers. Johnson settled for second while Matt Farnham edged two-time winner Justin Haers for his best finish of the season while Peter Britten rounded out the final front-five.

Heading toward the last full month of competition, Rudolph (613) remains ahead of Haers (596) and Britten (546) in the point standings, with all three drivers logging top-5 feature finishes in all nine events run.

Opening the season with two wins in the initial three events, until Saturday night even a finish among the front-five had eluded Sobotka in his bid for the elusive track crown in wine country. Yet his recent misfortunes positioned him near the front in the 25-lap Sportsman finale and the Parish pilot took full advantage en route to his third victory of the ’21 campaign.

“Definitely needed this win, not just for the points, but trying to get better with a lot of big races coming up,” remarked Sobotka, after outlasting defending track champion Matt Guererri for his fifth career checkered flag at the fairgrounds. Both drivers actually ended 2020 tied in points before Guererri was declared champ based on more feature wins. “This really helps, especially with some series stops up soon.”

Tony Velez out-dueled front row partner Tim Lafler when the green flag flew to lead his first laps of the season, with Kane Bristol and Zachary George joining the fray five laps in. J.T. Sperring spun the next time around to incur the first caution, collecting A.J. Lloyd and hard-luck Nick Cooper in the turn one mishap.

Zach George moved in to challenge Sobotka halfway through but the WNY traveler broke on lap 14 to end any chance for the Wilson driver to score his first career win in Canandaigua. In the lap 14 slowdown, a rare red flag was dropped after Andrew Jacobson looped in turn one and was rammed right after by Eric Years although both drivers walked away unassisted in the aftermath.

After filing in 14th on the starting grid, points leader Guererri ran fifth at the lap 10 mark before charging into second with a dozen laps still to go. With the final dozen laps run uninterrupted, Guererri tightened the gap, pulling alongside Sobotka on lap 24 before falling just .2-sec behind at the stripe.

“Saw him going into turn three coming out for the white flag and I knew that the top (groove) wasn’t there because I tried it on one of the restarts,” Sobotka noted. “So I just had to keep the bottom and not let him get a little bit lower than me. I was entering a little too high and tried to cut off the bottom. He showed me that I had to enter low and stay low through the whole corner. Don’t know how far away he was behind me going across the checkers but it was pretty close.”

“Have to thank Steve (Stirling, Lubricants) and Brian Donath with Donath Motor Worx. Have had trouble ever since blowing up our motor a couple weeks back and Brian has helped trying to get it figured out. Hopefully we’re back on track now.”

Ruggles is certainly back on track after Canandaigua’s all-time sprint car winner finally made his way into victory lane. While the drought for Sobotka spanned nearly two months, Ruggles last reached the LOLR winner’s circle after claiming the 2020 season-finale held in late September.

“Gotta thank all my guys, we really struggled all year to try and get a win and I finally captured this (checkered) flag,” remarked a relieved Ruggles, after the five-time MEM 305 points champion posted his 41st career sprint win in Canandaigua. “Can’t do any of this without all the people that help me out.”

When chief starter Scott Hixson waved the first green flag to begin the 20-lap A-Main, Ruggles quickly went to work, bolting from fourth to first taking the high line all the way around. A turn one tangle involving Matt Rotz and 15 year-old Arizona invader Brandon Sampson on the opening circuit forced a complete restart but Ruggles mirrored his previous maneuver and climbed back to the point.

Back under green Ruggles held steady at the point, pulling away from nearest challengers Jordan Hutton and Brandyn Griffin while the field of winged machines spread out as the laps clicked off. Pole starter Ethan Gray got sideways exiting the first corner and during the ensuing lap 10 caution runner-up Hutton suddenly ducked pitside after mechanical issues curtailed his best run of the season.

The #48jr. Batzel’s Auto Service-Danny Willmes Ent.-VanBortel Trucking Eagle entry was back on the gas at the midway mark but this time it was two-time winner Griffin locked in Ruggles’ rear-view mirror. Griffin looked low lap after lap, even trading paint underneath in turn one with three laps to go. But at the wire it was still the ‘motorized madman’ matching Sobotka with a mere .2-sec margin of victory with Bobby Parrow, Chase Moran and Ray Preston rounding out the top-5.

“Great team effort, Mike Mastin with our motors and Bruce Batzel, he bought the tires for this hot rod tonight and I can’t thank him enough,” added new points leader Ruggles. “And Ike VanBortel, we just keeping bouncing off ideas back and forth.”

“Jason Barney (360 Sprint driver) has been phenomenal with these Fox Shocks. He’s got me pointed in a different direction than I’ve ever gone. Never raced on a dry slick track like this but I have to thank Paul Cole (LOLR promoter) and his own crew. Good track surface, didn’t rubber down and my right-rear tire is still good for next week.”

While the 15-lap Hobby Stock feature kicked off the five-card show under gray skies and 20-lap Street Stock main event brought the curtain down on the program with rain drops starting to fall, both Eldredge and Grant never flinched as they continue to dominate full-fender racing at the popular Routes 5&20 speedplant. With nine races run through July, both drivers have used six wins and 8 top-5 finishes to rise atop the point standings each in search of their first track titles at LOLR.

“Didn’t push the car to its full potential, with a track like this once out front you hug the bottom and that’s what worked for us tonight,” said Grant, who finished second in points the past two seasons, scoring three wins last year and one in his 2019 debut campaign in Canandaigua. This time around the driver of the #36 Hands Performance & Powder Coating-Washburn Excavating entry leads LOLR all-time stock car winner Mike Welch with five point shows remaining on the schedule.

Making only three starts in the 2020 Hobby division debut, Eldredge is on the verge of a successful sophomore season with only a handful of races left heading into the Labor Day Weekend points finale. Despite taking the lead from ’20 points champion Tyler Burnell with only five laps to go, his latest romp aboard the potent #25J Eldredge & Sons Scrap-Big Mike’s Auto Chevrolet Monte Carlo was by three-quarters of a straightaway with still-winless Casey Wagner securing second-place with his seventh top-5 tally of 2021.

Burnell settled for third ahead of Brian Lloyd and veteran wheelman Marc Minutolo,

178th ONTARIO COUNTY FAIR ENDURO CHAMPIONSHIP UP NEXT
Land Of Legends Raceway hosts the only oval track event of the 178th Annual Ontario County Fair as “Enduro Twin 50s” are the main motorsports attraction on Wed. July 28. A pair of 50-lap events for 4-Cylinder and 6-Cylinder racers pays each winner $500 with runner-ups collecting $200 and 3rd-place finishers taking home $100. Both winners also earn pole-position starts in the 2022 ‘Hangover 100’ coming on January 1.