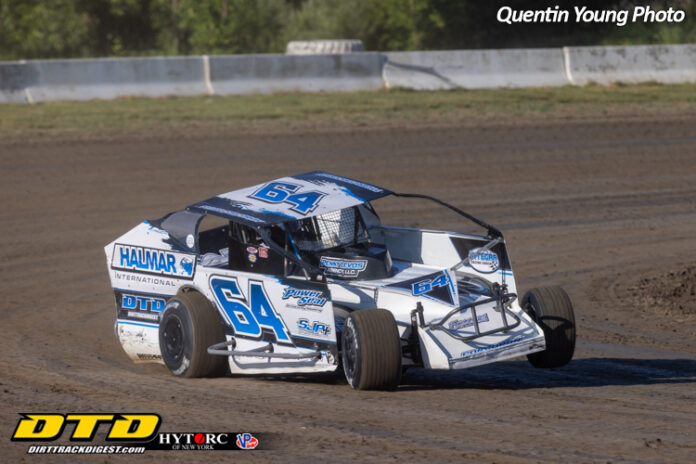 CANANDAIGUA, NY… Central Square, NY’s Tyler Corcoran has spent plenty of time and ran numerous laps at the “Land of Legends” ever since he was a youngster. The driver of the Halmar International, Dirt Track Digest.TV number 64 would take the lead early and would pull away to the Sportsman Super DIRTcar Series Western/Central Region combined race victory at Land of Legends Raceway Thursday night.

Nick Guererri and Andrew Buff led the DIRTcar Sportsman to the green flag in their Western/Central Region combined event with Guererri showing the way. After a multi-car incident on lap one, Tyler Corcoran would take the lead away from Guererri. Justin Henderson, the most recent feature winner at Land of Legends, would take second away on lap five from Guererri. Tyler Murray would move up through the field as by lap nine, would enter the top five.

The race’s halfway point would see Corcoran enter lap traffic, as he would continue to pull away from Henderson, Guererri, Buff, Murray, Kane Bristol, Cameron Tuttle, Frank Guererri, Dalton Martin, and David Rogers. Rogers started 11th on the grid fresh off the Central Region win on Wednesday at CanAm Speedway. Throughout the event, Andrew Buff and Tyler Murray would battle for positions inside the top five for several laps.

In the closing laps, the battle for second place would close in, but Corcoran was pulling away and would go on to score his second win of the season at the “Land of Legends”.

“Once again we stunk in time trials but had a good car and a great redraw and was able to get the lead and go on to win”, Corcoran said in victory lane. “Hats off to the track crew for the phenomenal track tonight. The car was unbelievable, and I cannot do it without the support of my sponsors, crew, and family.”