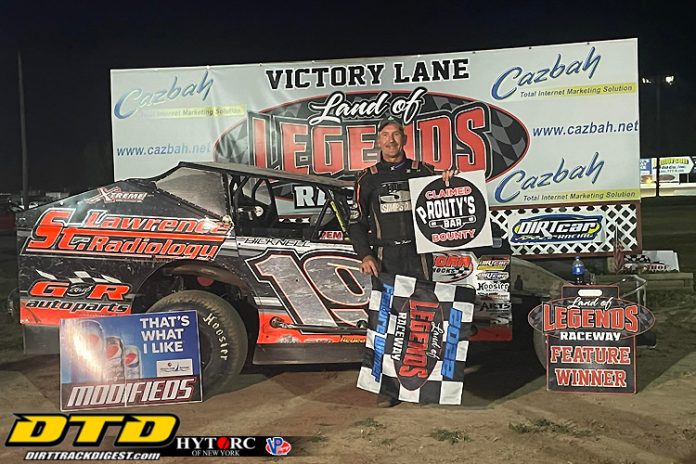 Australian ace Peter Britten was all set to savor his second Pepsi Big-Block Modified feature victory of the season at Land Of Legends Raceway. Instead, it was veteran Tim Fuller leading only the final half lap to score a stunning victory in the final ‘Saturday Spectacular’ of the month at the fast Ontario Co. Fairgrounds layout.

“I’ve lost ’em like that before, its unfortunate for Peter but after three long hot nights we needed this,” empathized Fuller, after cruising past a slowing Britten mount on the back chute of the final circuit to register his own second win of the ’22 campaign in Canandaigua. “I wasn’t the best out there, thought we had a 2nd-place car. I also know cars can break in the beginning of the race, in the middle and at the end so all I can tell Peter is it just sucks.”

Tyler Corcoran continued his good fortune on Cargill / Seneca Meadows Night at the speedway, capturing a division-high third Speed Connection Sportsman win to extend his points lead heading down the stretch. The Mike Emhof Motorsports 305 Sprint Car A-Main triumph was even more satisfying for Randy Years as it ended a 21-year hiatus for the veteran wing warrior.

In the full-fender ranks, a late-race pass by Carl Johnson in the Eldredge & Sons Scrap Recycling Street Stock feature and flag-to-flag run for Tyler Burnell in the Lloyd’s Contracting Hobby Stock finale netted each driver their second win of the season while Ken Welty posted a first-ever win in the entry level MighTea Boba New Legends Sportsman class.

Filing into 13th position on the 26-car Big-Block starting grid ultimately proved lucky for Fuller as the Watertown pilot pulled his #19 St.Lawrence Radiology-G&R Auto Parts-Integra Shocks/Bicknell ride into second just past the halfway point then rolled past leader Britten a quarter-mile from the finish to collect the $2,000 top prize.

“Didn’t see much when he went off, only knew we had one lap left,” remarked Fuller, 54, after logging his 10th career win in Canandaigua. “Car has been working good here lately so anytime you get a win it gives you momentum. I’ve been having a lot of support getting things transported my way lately so its great to have it pay off.”

Marcus Dinkins slid off the track high in turn one to incur the initial caution on lap 12 and Kyle Coffey darted past Newton for the top spot on the ensuing restart. Britten wasted little time tracking down the leader, moving past Coffey on lap 16 just before a second yellow flag unfurled for the spinning mount of Greg Birosh exiting turn two. Fuller wrestled second away from Coffey back under green conditions as Pat Ward, Erick Rudolph and Justin Haers joined the fray up front.

The lead order remained mostly intact as the laps clicked off with Britten on the verge of securing a convincing win after taking chief starter Scott Hixson’s white flag. But destiny proved otherwise on this forgettable night as he suddenly dropped off the pace entering turn two with his no. 21A Pepsi mount popping out of gear to gift-wrap victory for an unfazed Fuller.

Ward, Rudolph and Haers also improved their finishes while Britten regrouped to cross the line fifth ahead of Coffey and the brothers Johnson, Alan and Danny. And instead of reducing his points deficit to single digits, Britten now sits 21 behind defending track champion Haers with the final month of the regular season looming.

“Missed a week here with the motor and had to put one in that had a little too much horsepower for this place,” noted Fuller, who also pocketed the $100 ‘Prouty’s Bar Bounty’ for stopping Haers’ win streak at two. “So I got the engine back from Tom Leahy and thankfully me and Rob Graham banged that in there yesterday morning before Can-Am (speedway, small-block race) and finished it up today. Been really hot so this (win) takes care of some of the heat.”

Cooling off is out of the question for Corcoran, especially after the Central Square chauffeur dominated the opposition in Ontario County in a new Bicknell entry sporting the same no. 64 Halmar Int’l-Power Seal-Dirt Track Digest nomenclature.

“Brought out this new car and man, don’t know what to say, got two 2nd-place finishes and now a win, wow,” beamed Corcoran, who remained hot with a sixth top-five feature finish in his last seven starts in Canandaigua. “This is actually completely new to us. Our other car has a torsion rack and this is coil only. Normally run a 2019 car and this is a 2022, guess its pretty good.”

Corcoran began 10th in the 25-lap feature yet after just two times around the hallowed half-miler had cracked the front-five and was hungry for more. Pole-sitter Tony Velez led the opening circuit before slowing in turn four to relinquish the point to Karl Comfort under caution the next lap. Only Tim Baker, Nick Root and Nick Guererri separated Corcoran from the leader when green lights flashed again, but just Guererri stood in the way with five laps in the scorebook.

Corcoran edged past Guererri at the line on lap nine then ducked under Comfort down the back stretch for the last exchange up front on lap 15. A fourth yellow flag on lap 22 for Velez was all that could slow Corcoran, with a 12 car-length margin the decisive distance when the checkers dropped. Comfort settled for second ahead of hard-charging 15th-place starter Zach Sobotka and the Guererri clan of reigning points king Matt Guererri, Frank Jr. and all-time LOLR Sportsman winner Paul.

“Think on lap two I went from 10th to 5th very quick and thought ‘maybe this thing has got it,’” Corcoran figured. “Then Nick and I were racing side-by-side. Didn’t really know if I could run the middle that well anymore, then I started pulling Nick. Kinda started to diamond each corner and I caught Karl and had to make my move there. Gonna sound very strange but every time my dad comes here I’ve won so I guess he’s a little bit of a good luck charm, “ added Tyler, whose father, Jeremie Corcoran, promoted then named Canandaigua Motorsports Park (2011-17) and now heads the track prep team at Orange County Fair Speedway in Middletown.

While first-place finishes are not uncommon occurrences lately for Corcoran, its been 21 seasons since Years last parked a sprinter in victory lane at the fairgrounds.

“We’re just coming out having some fun,” smiled Years, now 53, co-Rookie of the Year as an Empire Super Sprinter in 2000 before claiming his second of three career ESS A-Main wins at LOLR on May 12, 2001. “Got bored with helping out everybody else so I decided to buy a car last year. My dad passed away about 10 years ago and he loved sprint car racing, so this one’s for him.”

After remaining pitside for close to 15 years, the Honeoye Falls wingman returned to the cockpit last season and finished sixth in 305 points with a pair of top-5s at Canandaigua. He became the 28th different winner at LOLR since 2012 with his second front-five tally of the season on Saturday easily his best, joining first-time victor Ethan Gray who etched his name just two weeks earlier.

After dueling with ’22 rookie Tori Kaplin early in the 20-lap A-Main, Years took care of business around the outside exiting turn four with nine in the books. Despite Kaplin’s teammate Johnny Kolosek parking his mount high in turn two for the lone caution on lap 17, Years was still up to task, putting a dozen car-lengths between runner-up Jason Whipple at the stripe.

“Couldn’t get the car to turn last week so I tried something entirely new tonight,” said Years, who purchased a new Eagle frame from Mike Emhof to begin the season and just last weekend traveled to Hershey, Pa. to pick up his fifth engine of the season used through Facebook. “This car wanted to run high all night. Thought it was good up there, didn’t see anybody else around and didn’t have a clue where they were running. My only crew guy was camping with his family so he couldn’t make it tonight … sorry about that Rob (Dietrich)!”