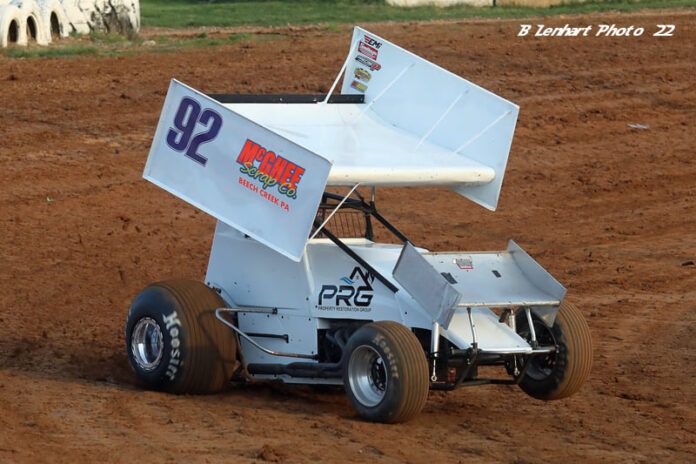 Mill Hall, PA – The Smith family has been synonymous with Sprint Car racing at Clinton County for decades.  On Friday night, second generation driver Johnny Smith of Scranton, PA etched his name on the list of sprint car feature winners, a list that also includes his father, Jon Smith.  “There is just something about this place that we love,’ said Smith in victory lane. “I have memories of coming here as a kid to watch my dad race, we both have a soft spot for Clinton County.”  Smith has won in the 600 Micro Sprint division on numerous occasions; however, this win was extra special as it was his first career win in a full size sprint car.  “We have raced 305, 358, and 360 sprint cars, and this is our first win,” added an excited Smith.

Jarrett Cavalet and Tylor Cochran led the full field of sprint cars to the green flap for the 25 lap main event.  Cochran led the first lap, with fourth place starter Johnny Smith running second, followed by Josh Beamer, Cavalet and Jeffrey Weaver.   Cochran and Smith were in a fierce battle for the lead until lap number five, when mechanical issues developed for Cochran and his car stopped on the front stretch.   Smith inherited the lead with Beamer, Cavalet, Weaver and Ken Duke Jr. restarting in the top five.   The only other caution of the event occurred on lap number 10, when Kyle Knoop’s car spun.   Smith once again brought the field back up to speed with Beamer and Cavalet trying to chase him down.

By lap number 17, Smith began to encounter lapped traffic.  At times Beamer was able to get within half of a car length of Smith but was unable to execute a pass for the lead. Ryan Kissinger moved into the top five on lap number 23.   When the checkered flag waved it was Smith over Beamer, Jeffrey Weaver, Ryan Kissinger and Jarrett Cavalet.   Sixth through tenth were Ken Duke Jr, Dakota Schweikart, Timmy Bittner, Garret Bard and Scott Lutz.  Heat races were won by Jeffrey Weaver, Dakota Schweikart, Josh Beamer and Tylor Cochran.  The consolation was won by Logan Jones.

AJ Hoffman started on the pole of the Pro Stock feature event alongside Kris Orwig.  Orwig caused the caution on lap number two allowing Johnny Bouse to move into the runner up position followed by Chris Small, Robert Tressler and AJ Stroup.  Stroup and Tressler battled for fourth and fifth position, with Stroup taking the fourth position on lap number seven.   Hoffman continued to hold off Bouse until lap number 12, when Bouse took his car back into the pit area.   The restart had Hoffman leading Chris Small, Stroup, Robert Tressler, Brandon Moser.   The final laps the top five remained unchanged.  Sixth through tenth were Marc Bittler, Rich Fye, Orwig, Todd Geyer and Austin Hulsizer.  Heat races were won by Bouse and Stroup.

Logan Hammaker and Luke Hess started on the front row for the 270 Micro Sprint feature event.  Hammaker lead the opening laps, as seventh place starter charged to the front.  Weaver passed Hammaker as Ross Perchak advanced into third followed by Bobby Sanso and Timmy Bittner.   Perchak took over the second spot on lap number six and set his sights on Weaver.   Weaver entered lapped traffic on lap number nine.   Perchak tangled with a lapped car and brough the caution out on lap number 10.   Weaver cruised during the final laps to claim the win over Hammaker, Timmy Bittner, Perchak and Sanso.   Heat races were won by Weaver and Perchak.

Timmy Bittner started on the pole of the 600 Micro Sprint event.  On lap number two, second place runner Johnny Smith took his car to the pits.   Bittner led Trevor Teats and Derek Swartz.  Jeffrey Weaver moved into the third spot on lap number 5 as Teats fell back to fifth.   At the halfway mark, Bittner continued to lead Swartz, Weaver, Cody Hauck, and Teats. By lap number 12, Teats began to charge his way back to the front.  In the closing laps, Bittner had Swartz and Teats threatening to make a move.  Bittner found grip coming out of turn two, which gave him an advantage going down the back stretch.  In the end it was Bittner over Swartz, Teats, Weaver and Hauck.  Sierra Hauck was sixth followed by Holden, Mikey Smith, and Johnny Smith.  Heats were won by Mikey Smith and Bittner.

In Four -Cylinder competition, Anthony Potter started on the outside of the front row and powered into the lead.      Sixth place starter Chris Small moved into the second spot by lap number four.  At the halfway mark, Potter led Small, Tim Muthler, Hunter Flook and Shawn Stahl.  A caution on lap nine bunched the field on Potter’s rear bumper.  Flook got a run on Potter and took the lead on lap number ten.  Shawn Stahl added his name into the mix and edged out Flook to lead lap number eleven.   Flook and Stahl raced hard into turns one and two, with Flook reclaiming the lead going down the back stretch.  Flook was the winner over Stahl, Sam Creveling, Chris Small and Terry Karichner.  Sixth through tenth were Tim Muthler, Anthony Potter, Nick Snook, Joey Snook and Matt Weaver.  Heat races were won by Potter, Keith Haagen and Scott Englert.

The Clinton County Speedway returns this Friday night with a five division show, featuring the Limited Late Models, the Central PA Legend Cars, Pro Stocks, 270 Micro Sprints, and the Four Cylinders.  Gates open at 5PM and racing begins at 7PM.  For the latest information about upcoming events, visit the speedway’s website www.clintoncountyspeedway.com or follow the speedway on Facebook, Twitter and Instagram.