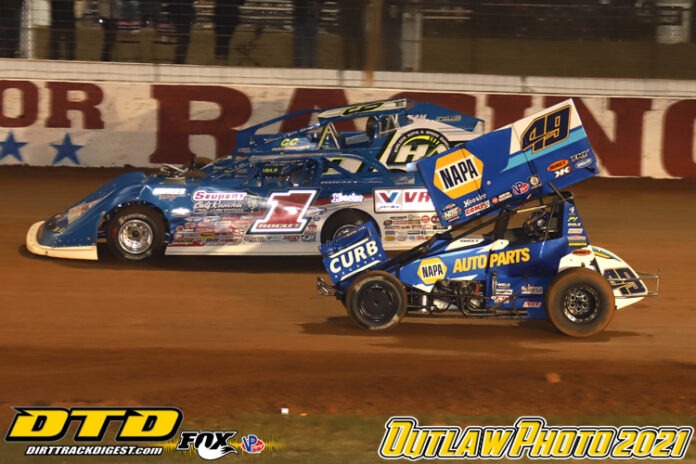 On Friday night it was announced that the World Finals will expand in 2022 to a four-day format with action beginning on Wednesday night instead of Thursday. More details will be released in the coming months.

Prior to the start of the A-Mains on Friday night, World Racing Group officials once again presented the ultimate 4-wide with every division on the speedway in four-wide formation.  One change this year is that the three series champions led the field around the track.  For the first time in the history of event, all three series championships have been decided.  Matt Sheppard (Super DIRTcar Series), Brandon Sheppard (WoO Late Models) and Brad Sweet (WoO Sprint Cars) all clinched the respective titles weeks ago.

Well, as always, motors can get eaten up at The Dirt Track at Charlotte. Brandon Walters put in a spanking new engine on Sunday night only to have it go in hot laps. Meanwhile, “The Doctor” appears done for the weekend after a bearing went on the No. 27j powerplant early in the evening.


Olden Dwyer, another platinum driver, chased difficulties all night. When you time trial poorly here it is a terrible night to come. He had fuel pump issues in hot laps and that sent him to the infield and in his heat the mag wire fell off and he fell out. Thus setting him up deep start in one of the Last Chance Showdowns. He was put in as a provisional along with Dave Rauscher, Jordan McCreadie and Marcus Dinkins.

Mike Mahaney has a bolt break in the steering and sustained quite a bit of bent up parts in the front end.

Upon breaking the car shot down the track and got into the rear end of Kevin Root’s 34. That clip was expensive as Root had a cracked oil tank, broken right rear shock, ruined right rear rim, lost a right rear tire, bent exhaust, had the drive shaft come out and broke the rear end tube.

Ronnie Davis indicated that, despite it seeming pretty clear, it was quite dusty out there during the heat race making visibility a bit difficult.

Tough night as Pat Ward was unable to qualify in his last weekend running for the Gypsum team.

Tim McCreadie had a tough night as the Petruska No. 66 was off the pace and he was a DNQ. Meanwhile, in the Late Models he started third, fell back a couple of spots, jumped the cushion and appeared to get a piece of the second turn wall, pitted, but got back on the track about three-quarters of a lap down and eventually called it a night.

Jack Lehner ran second in the early part of the race, but his right rear went away in the late going as he dropped from the top five.

Tim Sears Jr. came from the last chance race to 14th in the 30-car field.

Duane Howard eventually finished 11th, but worked his way up and ran inside the top 10 at several points during the main.

In hot laps, New York Sprint driver Paulie Cologiovanni had heavy smoke from his 10c and noted that it was simply a little oil blowing out and everything was fine. He finished second in the C-Main and eventually finished his night with tenth in the B.

Former western New York Modified driver Matt Farnham brought his Sprint to Charlotte and finished ninth in the B Main.

Brock Zearfoss was docked two spots at the conclusion of the first World of Outlaw Sprint Car qualifying heat. That took him from one spot out of qualifying to eighth.

Gray Leadbetter made her World of Outlaw Sprint Car debut. Unfortunately, it didn’t end well for the young lady.  She flipped when the left rear broke off the car heading into turn three. She went over multiple times. Thankfully, she was unharmed in the incident.

Brandon Overton made his World of Outlaw Sprint Car debut in a Jason Sides mount. The Super Late Model ace failed to qualify but gained experience in the winged car.

Sheldon Haudenschild flipped in the A-Main and came down on all fours after doing wing damage. The team made the repairs and sent him back out on the track.

David Gravel’s win in the World of Outlaw Sprint Car main-event was his fourth in the last five events at The Dirt Track at Charlotte.

Austin Swamp, the head starter at the Mohawk International Raceway, was welcomed to the flagstand by Dave Farney and John Nelson as they handed him the reigns flagging one of the World of Outlaw Late Model events. 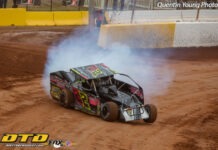 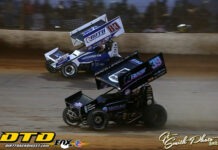 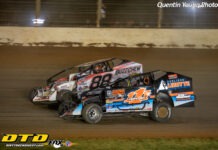