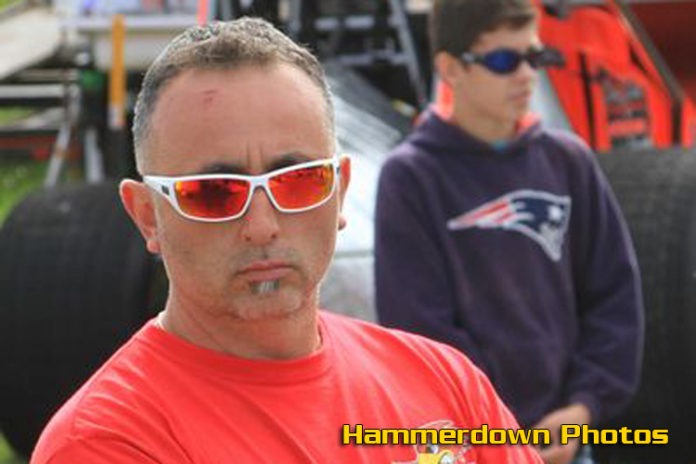 Sometimes in life change can be a good thing.  That is exactly what big-block Modified driver Vinnie Vitale is hoping for. The Cato, N.Y., driver is leaving the Modified world to go all in to run 360 Sprint Cars in 2017. Several reasons are behind the change but the biggest reason is cost.

“I feel like the Modified is getting out of control money wise,” commented Vitale when reached by DirtTrackDigest.com on Wednesday afternoon. “To stay in it, to keep up with everyone else, it’s just gotten out of hand. I don’t really have a sponsor like some of the bigger teams do. I do it more as a hobby than anything. That’s not a hobby. We are racing for the same amount of money we’ve been racing for for years. You have one bad night and you can’t even buy a tire for what we make.”

Besides cost, Vitale is looking to have fun. He believes he can do that while competing in the Sprint Car. The 360 Sprint Car world has been known to be far friendlier than many other forms or racing. Teams often travel together, stay together and even spend time away from the track as non-racing activities.

“The Sprint Car world is more of a family,” said Vitale. “Everyone is there to help each other. I’ve got my car and other parts and pieces, everyone has been helping me. They’ve been great. Both Donath brothers, Brian and Shawn, Jason Barney has been good and Doug Emery. I got a car from Chuck Hebing and he’s been awesome, they’ve all been awesome.”

This isn’t Vitale’s first foray into the Sprint Car world as he competed in a handful of events back in 2013 with mixed results. At that point he teamed with Barney at X-1 Race Cars. With where he was in his career  at that time, he wasn’t ready to go full tilt on the Sprint Car with the big-block Modified being the focus. This time, he’s all in.

“I know when I got into it I was with Jason (Barney) and they taught me a lot, but I didn’t get anything out of it because I was so worried about the big-block at that time,” mentioned Vitale. “I was trying to do both things. I think if I just focus on one thing I’ll get a better idea of what I need to do for setup wise and stuff like that. I’m starting all over. I’m starting from bottom to hopefully work my way up. I think the first few races I’m going to start in the tail until I’m comfortable to race with them guys. I don’t want to screw anyone else up.”

Vitale plans to race locally while being able to spend more time at home with his family. He’s looking forward to being able to do a lot of things that he’s missed out on because of his commitment to weekly racing.

The move comes with both excitement and sadness for Vitale. He admitted that he’s going to miss a lot of the things in the Modified world including the folks at Bicknell Racing Products, but he knew he was ready for a change.

“When racing season came to an end I was trying to figure out what to do with the big-block,” said Vitale. “We were going to make some changes with the motor and get a new car and all that. In talking to Randy (Williamson), that’s the one part I’m going to miss, Bicknell. Everyone there has been awesome with me. I was thinking about all the stuff I did over the years with the Modified and I finally decided that I want to get back to being excited about racing again. I’m exciting about this. I can’t wait to hop back in and see what I can do with it.

Vitale will have just one car at his disposal, an Eagle Chassis, as well as only one motor. He’ll head to the races with support from his company Vitale Ready-Mix along with help from Donath Motorworx and 87 Speed.  His car will make it’s first appearance at the Motorsports Expo in Syracuse as part of the Lucas Oil Empire Super Sprint booth.