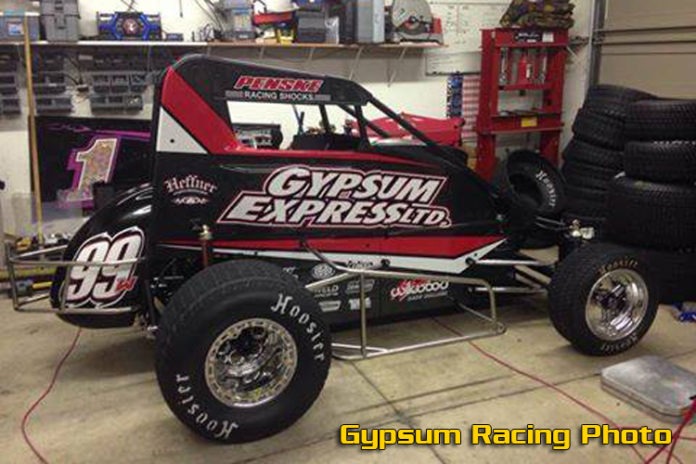 By BROOKE & LARRY WIGHT (First in a Series)

Let us start by introducing ourselves. Our names are Larry and Brooke Wight. Larry is the driver of the 99L Gypsum Express Northeast Big Block Dirt Modified as well as occasionally his 360 or 410-winged Sprint Cars.

Throughout the summer months our schedules tend to get quite hectic with Larry racing weekly for points at Brewerton, Fulton and Utica Rome Speedways along with following the Super DIRT car series.

Larry and I met ten years ago, at the Motorsports Expo in Syracuse, N.Y., and we have been in each other’s lives ever since. On February 27th, 2016 Larry and I got married at Turning Stone Casino in Central New York.

DirtTrackDigest.com reached out to us before we headed to Tulsa and asked if we would be interested in doing a diary of our day-to-day experiences. DTD asked us to provide our first hand experiences and provide the color and atmosphere for this exciting event.

We expressed our interest and if this helps race fans enjoy the behind the scenes experiences of this tremendous midget event we will be happy to do this.

How did we get started on this adventure?

Thanks to our dear friend Dave Reedy we were able to meet and secure a ride with Heffner Racing for the 2016 Chili bowl. Larry made his rookie debut in the USAC midget crewed by Sean Micheal and Sean Strausbaugh.

Larry was not the only wheelman for Heffner racing at the 2016 Chili Bowl his teammate for the week was Tanner Berryhill.

Sean and Sean were the only representatives of Heffner racing in charge of maintaining both cars for the entire week. To reduce the workload for Sean and Sean, Larry decided to bring a few of his own crew members to help out. Pat Ward, Scotty Jeffery, and Jake Pietrowicz were the perfect three to bring along. These three guys have been a part of Gypsum racing for all of Larry’s racing career. It is easy for these three guys to know what adjustments Larry will want done to the car before he is even off the track.

Tim McCreadie is a veteran when it comes to the Chili Bowl. Lucky for us we have known Timmy for a long time from the Super DIRTcar Series Tour. All week-long Timmy and Larry were constantly seeking each other out and talking for what seemed like hours.

They could not stop saying “the set up on these midgets are like a 1980 DIRT modified.”

TMac gave Larry a crash course in how to get to the front of the pack as fast as possible and maintain that position to qualify. Timmy really helped speed along Larry’s learning curve as he struggled to put his Big Block knowledge aside.

Watching two drivers that are typically battling for positions, now comparing notes was truly amazing. As a race fan this was the best part of the week to me (other than Larry being #2 trending on twitter thanks to Kyle Larson).

Larry and Timmy were there representing all our New York dirt drivers, proving that our drivers sure can hold their own against the best in the country.

Sean was able to shave off approximately 70 lbs. compared to last year’s car.

If Larry hasn’t gained any weight and limits himself to Cracker Barrel when we are down south this could significantly increase his odds at qualifying for the Golden Driller. To help with the weight reduction the team decided to go with a carbon fiber body complimented with a simple red and white paint scheme.

We will be leaving Sunday morning for Tulsa. We will run hot laps on Monday. On Tuesday evening, Larry will run his heat race for the 2017 Chili Bowl.

We hope you all will be watching on racinboys.com. Larry is excited to get in the new car and see what she’s got. If its anything like last year this should be exciting!

Hammer Down, hope it sticks!