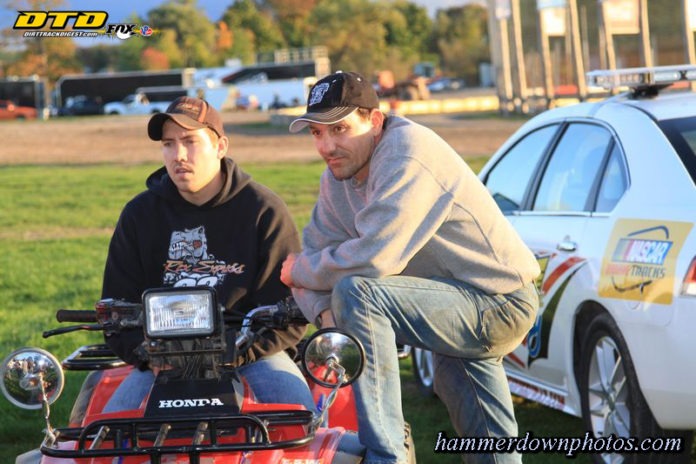 Information came to us this week that Danny Varin has written a book. Smokescreen: The Tony Stewart-Kevin Ward, Jr. Incident by Daniel Robert Varin is available on Amazon in paperback. According to the Amazon introduction for the book racer Danny Varin was in a perfect position to view the tragic events that unfolded on August 9th 2014 that claimed young Kevin Ward Jr.’s life. We spoke with Danny and although up until the book release this week, Danny never wanted to talk much about what happen that night he has been dealing with his feelings and emotions ever since. He was running directly behind Tony Stewart. He saw what happened and although it was thought that night before he left the track that Kevin had lost his life it hit Danny the hardest the next morning when it was confirmed on the news.

“I think that is when it hit me harder, the reality of the whole thing,” said Danny when we spoke with him this week after learning about the book from his father.

According to Danny he was having trouble coping with his emotions after the event and when he started hearing all the speculation regarding what transpired that night it frustrated him; the speculation, mis-information and just plain BS. Danny was prompted by his father to start writing down his thoughts that became a journal of sorts. He was subpoenaed to testify at the trial and most recently gave a deposition for the civil suit. After laying out all his thoughts and feelings in his journal Danny thought that turning his notes into a book would be a possibility and therapeutic for him and maybe help others rest a little easier. As soon as we heard that Danny had written this book we order our copy from Amazon and we now have added it to our reading while in Florida.

In a talk with Carole Palmer this past week we learned that Palmer Racing has big plans for the 2017 racing season. As they did last year they will have Bobby Varin behind the wheel for many events including DIRTcar Series events. Through a deal that has been in the works for some time between Bobby Varin and Bobby Hearn Palmer’s have purchased a new TEO that will be numbered double zero and will run at Fonda this season. Dave Cruikshank is providing the engine to power the double zero while Palmer’s have purchased a back up motor from JPM. Alton’s racing will put him behind the wheel when possible at Fonda in his familiar No. 76.

We also spoke with Pete Demitraszek this week and learned that he has been able to secure the IMCA sanction for Glen Ridge and is attempting to get a DIRTcar 358-Mod sanction for The Ridge. As of January 5th the Glen Ridge website stated divisions to run weekly this season will be Modifieds, Sportsman, IMCA Mods, and Cruisers. Bi-weekly divisions are Outlaw Midget Series and Vintage Modifieds. Pete is also looking at Slingshots if enough cars are interested. Fonda will remain DIRTcar sanction in 2017. Danny Johnson will call Fonda home on Saturday nights again this season. Toby LaGrange will return to assist Ron Szczerba with press releases and will handle Victory Lane interviews. Pete is currently looking at scheduling a meeting at the Winner’s Circle to discuss the upcoming season, rules etc. with drivers and owners but at the time we talked with him he did not have a date.

We are in Florida and Christmas and New Year’s are in the books so now we will start to hear the roar of engines at Daytona International Speedway as the competitors start to arrive for practice for the Rolex 24 Hours scheduled for January 28-29. NASCAR star Jeff Gordon was at DIS on Friday to practice with the Cadillac Prototype he will run in the 24 event. Gordon’s only other Rolex 24 start was in 2007 when he was part of the Wayne Taylor team. This year he is back with Taylor in the Konica Minolta No. 10 Cadillac DPi-V.R.

As we sit here we do think of all our friends up north in the cold but know that soon many of them will make the trip to sunny Florida for Speed Weeks 2017 that includes the DIRTcar Nationals at Volusia Speedway Park February 14-25.