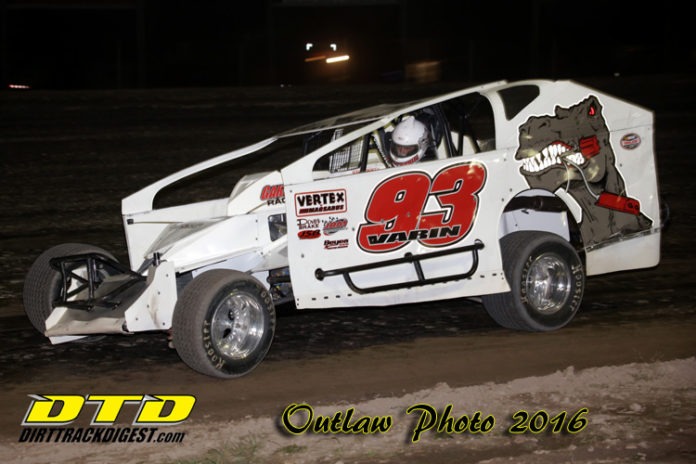 There’s something comfortable about the same broken-in fire suit, the same worn-in gloves and the same chipped helmet that seems to produce a euphoric feeling of solitude for the men and women that climb behind the wheel. The same can certainly be said when it comes to their affection for the machines they pilot.

Second-generation modified driver Danny Varin is no different. Over the past two seasons, the driver of the fan-favorite Magsarus No. 93 modified owned by Ed Monger has arrived at the track behind the wheel of the same Higfab modified chassis. With the 2017 season just around the corner, the only item of familiarity that will remain is the number plastered on the door of his racer.

After a well-publicized four wheel hop going through the corners of the Oswego Speedway [in Oswego, New York] during the 2016 edition of Super DIRT Week, young Danny Varin discovered two things about modified racing. First, a 2,500-pound big-block shouldn’t fly and second, if you do, odds are the landing is not going to be pretty.

“We were running second to Matt Sheppard up at Super DIRT Week,” explained Varin. “And we had plenty of laps left so we were just cruising after we got the paper plate off the window and I could see. Then, I just hit a hole wrong.” That could be the most understated explanation of the year for Varin.

“I hit one of the 500 holes on the race track,” Varin continued. “And the car just took off and it hurt. I mean, my ribs were sore for a week after and to be honest, I really thought we were going end-over-end but when the car landed upright, it pretty much snapped the frame right in half right at the torsion bar rack. I’ve seen rough before but never anything like that but at least I can say that I drove on the dirt and the asphalt of Oswego in the same day.”

Though he was able to keep his modified going for a little while longer, both his day and even worse, his chassis were done. “We were still passing cars and still running so we stayed out there and milked it for as long as we could,” recalled Varin. “But it was too much to finish. We really didn’t know the extent of the damage until we stripped the car down when we got home. There was definitely some carnage from that race.”

As stated previously, familiarity can be a cornerstone in the racing industry at times and the difficulty of starting over from scratch isn’t lost on the Sharon Springs, New York native especially given the success the team had over the 2016 season. With two victories at the Utica-Rome Speedway, a slew of second place finishes to Matt Sheppard at the same venue, qualifying fourth at Super DIRT Week and then winning one of the triple-30 qualifiers, losing his modified at the end of the season was quite a blow.

“It’s definitely going to take time to get back to where we were and that’s the biggest thing,” He continued. “We had a good, balanced race car that we could fine tune so right out of the box last year; we were fast. We really had the car dialed in and all we made were small, stupid changes like spoiler height or tire stagger. This year is going to be a little different.”

Performance wasn’t an issue where swapping chassis manufacturers was concerned for driver Danny Varin and car owner Ed Monger; it was the chance to work with someone new one-on-one that ultimately became the deciding factor behind the change.

“The whole reason we went to Jerry Higbie in 2014 was because we got to be with him one-on-one,” Varin explained. “The only reason we didn’t go back to Higfab was because Pete [Chuckta of PMC Race Cars] was willing to work with us a little bit. He’s close by to our shop and if we hurt the car, it’s his work and he can fix it. We’re trying to build a good relationship and hopefully we can achieve that.”

After the duo of Monger and Varin went to Pete Chuckta’s shop, their minds were made up rather quickly. “We went to his shop and talked to him,” said Varin. “And I’ve seen his work and it is phenomenal; it’s great work. I don’t think he does any less work on his cars or less quality work than the big manufacturers like Teo or Bicknell or Troyer.”

As for whether or not he will miss driving his Higfab chassis over the new PMC this season, only time will tell the tale for Varin. “We’re off base as far as setup goes anyway,” He said. “I don’t think anyone does what we do as far as that goes but to be honest, I really can’t say if I’ll miss the Higfab car until at least a few weeks into the season. Then I’ll be able to give people an honest answer.”

Even with the limited amount of races actually run at the Utica-Rome Speedway last year thanks to Mother Nature, Varin found success at the Vernon, New York facility. However, the results still left a small feeling of disappointment for the young modified driver.

“We need to get more wins this year,” Varin stated. “The results were there but the wins weren’t there. I know it sounds selfish given how well we ran but when you have someone like Matt Sheppard at your weekly track that wins so many shows; we need to beat him; plain and simple. We’ve done it before but he’s just so consistent and so good all the time. Our goal this year is to be there and to be pressuring those guys for the win every week.”

Though he’s proven that he has the talent to travel to different speedways and compete with the best that dirt modified racing has to offer, it’s just not possible to join the Super DIRTcar Series or tour very often.

“I enjoy going around and traveling and racing with the best drivers,” remarked Varin. “It’s just extremely difficult to do that with what we have. There are two guys and myself and we all have full-time jobs and if you are going to race big series races, you need to be prepared; you need to have all of your stuff together. I’m so thankful to be where I’m at but to be as well prepared as you need to be you almost need to be a full-time race car driver and we just can’t do that.”

For 2017, Danny Varin will be back in weekly competition at the Utica-Rome Speedway and despite the hard hits he took at Super DIRT Week, his team plans on returning to the event at ‘The Steel Palace’ this October.

“We had a lot of fun at Oswego this year,” Varin concluded with a smile. “It’s difficult the way we do it with everything we have going on all the time as far as work goes, but to have the fun we did and to run as well as we did last year, I know that Ed [Monger] plans on going again. Once you get a taste of what it’s like to run against those guys and run well, it’s hard to take a step back.”