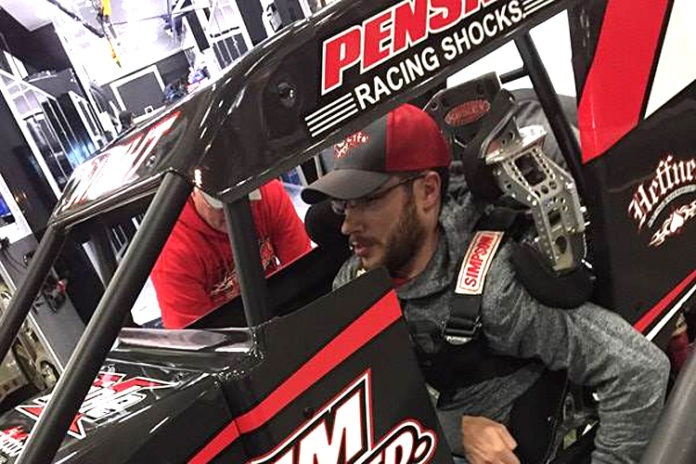 The three a.m. the alarm started sounding its go time! On your average day you can expect our alarm clock to go off at least a hand full of times before we finally start pushing one another out of bed to get the day started, but not today! Today we both flew out of bed and prepared for the day.

One last check of our luggage and we are out the door.

Our flight into Atlanta arrived over an hour early, but our next flight to Tulsa had been delayed.

After five long hours in the Atlanta airport and the guys bravely eating airport Chinese we are finally Tulsa bound!!

Our plane into Tulsa was full of race fans all decked out in an arrangement of race gear Christopher Bell hoodies, DIRTCar apparel, Rico Abreu T-shirt and so many more were everywhere.

Once we landed, got our luggage and rental car it was straight to the expo center!! Today was move in day at the expo center. The crowd walking around today is nothing compared to what it will be like in the days to come.

Larry jumped in the car for the first time soon after laying his eyes on it. After making a few seat belt adjustments the 99W is ready for hot laps at the Chili Bowl.

We then headed over to the Simpson trailer to catch up with our good friend Aaron as well as pick up Larry’s new carbon fiber helmet.

After finally getting checked into the hotel we were off to dinner with the Sean’s and the rest of their gang who we haven’t seen since World Finals. It was great to catch up with everyone and discuss each other’s race season. Finally after a very long day we are settling in for a few hours of rest.

The race is on to the expo center, but first beer stop!!

One of the coolest parts of the Chili Bowl is drinking is not only allowed in the pits, but you can walk through the door in the morning with your cooler full of beer and the staff greets you with “party is here”. Upon arriving to the expo center it’s straight to work for the guys. Sean and Sean were already hard at work. Heating the engine, oil, check fuel, tire pressures all prep that you would expect to see done with a Big Block Modified also. Final touch mount the GoPro’s on the car. The 99w is ready
for hot laps.

I can honestly say I never get nervous watching Larry race although the Chili Bowl is an exception to that.

This race is on a whole new level. Between the car count, level of competition , such a small track, lack of seat time he has in this car, and the large flip counter the track has displayed it gets very overwhelming.

Of course Larry shows no emotion and climbs in more determined than ever.

Adjustments needed to be made including adding a bigger foot block to allow Larry to gain better throttle control.

The second hot lap session Larry was spot on he said the car felt great.

After hot laps concluded representatives from Esslinger Performance did some fine tuning to the fuel injection.

Now it’s off to Buffalo Wild Wings to watch some football and relax before another long and exciting day tomorrow!!