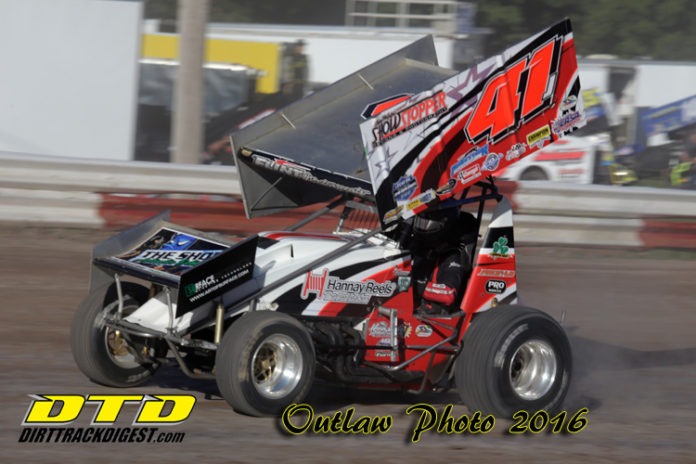 Racing has always been about one conclusive commodity; improving your position.

From being on the speedway racing to working on your program away from it, the goal of upmost importance is to always be moving forward in one aspect or another and nobody understands those ideals more than Cherry Valley, New York native, Josh Flint.

For the better part of 14-years, the driver of the No. 41J tried to follow in his father’s footsteps. First, Flint cut his teeth in the open-wheeled sportsman division at the Utica-Rome Speedway [in Vernon, New York] and then he moved to the ground-shaking modified division at the Fonda Speedway [in Fonda, New York]. Yet despite his efforts, the results often left something to be desired.

It wasn’t until the 2015 season that Flint finally found a home; a place where he felt he truly belonged; behind the wheel of a winged sprint car. “I’ve always wanted to race for as long as I can remember,” Flint said. “But the truth is, even though we were running modifieds, I always wanted to be in a sprint car. That’s where my heart truly was.”

After selling off the entirety of his modified efforts in 2014, Flint’s dreams were realized when he found his way to victory lane at the Albany-Saratoga Speedway [in Malta, New York] midway through his rookie season with the CRSA [Capital Region Sprint Association] tour the following year. Finally, instead of taking a step forward and two in the opposite direction, success was becoming the norm.

The 2016 season brought a mixture of both success and adversity and nearly in equal measure. “Last year was tough,” commented Flint. “After buying out the team that I ran with Mike VanDusen the season before, knowing that I was running on my own again, we knew right from the onset that the year was going to be difficult from not just the racing aspect but from the financial one as well.”

The Flint Motorsports team literally had to start over from scratch purchasing everything from a new truck and trailer to spare parts, motors and a chassis. “There was so much more to accomplish behind the scenes that people don’t know about,” He continued. “The support equipment you need adds up quickly. The year before all I needed was sponsors, a fire suit and a helmet; now I had to build the entire team from the ground up.”

With all the pieces of the puzzle coming together, Flint walked into the season-opening round of the CRSA tour at the Fonda Speedway with great optimism; unluckily, he walked away with only a steering wheel. “We knew running our own deal that we had to be smart with our money,” Flint remarked. “Unfortunately, I was battling for fifth opening night, jumped a right rear and completely junked our first car.”

Not to be deterred, Flint immediately went back to work. “Never in my life have I ever had a back-up car,” He explained. “This year we actually did so we put it together and went back at it. In years past, that kind of thing on opening night would have ended our season; not this time around.”

Jumping right back in feet first, the second-year sprint car competitor picked up where he left off the following week with a strong top-five finish at the Orange County Fair Speedway [in Middletown, New York], boosting his confidence that he and his team could face adversity head-on and still continue without missing a race. However, just when circumstances were looking up, the proverbial shoe dropped.

“Three races later with the new car we won our heat race easily,” Flint stated. “But we ended up with a bad draw and started deep in the pack for the feature. When the green flag came out, someone tried to win it all on the first lap and we ended up stuffing that car into the wall and doing some pretty serious damage.”

A front clip and a whole lot of work later, like a Phoenix from the ashes, Flint was back to try his luck yet again. “When we got our Panther [chassis] back, the results we expected came back as well,” He explained. “Then we started to hit our stride and consistently clicked off some top-five finishes until we finally picked up a win at the end of the year at Penn-Can [Speedway in Susquehanna, Pennsylvania].

After winning in both of his seasons with the CRSA, proving to himself and his sponsors that his first year success wasn’t a fluke by any means, Flint noticed there were new opportunities being presented to him and there was no time like the present to take advantage of a great situation.

“Last year I was fortunate enough to run a 360 a few times,” Flint said. “I had a good friend that lent us a motor and though we missed qualifying for the Cole Cup at Utica-Rome, we did run really strong and we proved that we belonged there. That’s when the gears started turning that maybe we can move up a division and be competitive.”

His instincts proved correct towards the end of the year when the Patriot Sprint Tour made a stop at his old stomping grounds; Fonda Speedway. “We made a strong statement in the heat race that night,” remarked Flint. “We started sixth and were battling for second after the first lap. Then we had a hell of a run going in the feature until I made a rookie mistake but at least we were competitive; they definitely knew we were there.”

The experience garnered behind the wheel of a 360 sprint car proved that now was the time to make a move and for 2017, the Lucas Oil Empire Super Sprints was the most logical option to pursue.

“The ESS has the best 360 drivers in the north east,” Flint stated. “When they [ESS] show up to a track, it’s a packed house. They put on the best show in the area and there are so many guys that I’ve looked up to over the years running that series that I want to be a part of it. It’s a natural progression as a race car driver to want to test yourself and run against the best; these guys are it.”

It isn’t just the exposure for himself that made the decision to compete with the ESS an easy one for Flint; it was the exposure for his sponsors as well. “The series didn’t just open their arms to me,” Flint said. “They have to my sponsors and everyone involved. When you have Mike Mallett [ESS announcer] on the mic promoting your sponsors, even when you’re just one of the little guys, is huge because we all know that in this sport you need the marketing partners and they need the recognition.”

Flint understands the undertaking he’s about to embark on more so than most. To say there was a rather steep learning curve from jumping into a sprint car after running a modified for many years is an understatement. Now, with the increase in horsepower, there’s an entirely different set of growing pains to contend with.

“Going from the 305 to a 360 is a huge jump,” Flint continued. “We’re going from almost 500 horsepower to almost 700 horsepower plus the 360 sprint car is 50-pounds lighter. Then again, after driving the modified for all those years, I’m used to having a little bit of power. I have the mindset that I can’t screw this up; I have to show people what I can do and the opportunity to move up was just too good to let it go.”

Racing is a funny, fickle business. You never know who you’ll be working with either for the first time, or in the case of Josh Flint, for the second time. Simply enough, the circumstances leading up to the 2017 season were pushed forward thanks to a motor deal with someone very close to the aspiring sprint car racer; Mark Flach.

After spending many hours working with Flach in previous years, Flint’s racing career has come full circle. “We were able to secure a partnership with Mark [Flach of Flach Performance Products], said Flint. “He helped facilitate us getting our own motor so we wouldn’t have to worry about borrowing one and now we can really solidify our plans for the upcoming year. Now we can say that we are definitely going to run about 75% of the ESS schedule where before, we were really hit or miss.”

“We have been so lucky to maintain great relationships with great sponsors,” Flint acknowledged. “We have Hannay Reels coming back on board for the sixth year; we also worked a deal with Flach Performance Products for this year and hopefully many more to come. We have Surface Science and we have a few that have just recently signed on that we can’t release yet. Without all of them, we wouldn’t be where we’re at heading into the season.”

Even though he’s moving on from where he started two short seasons ago, Flint will still remain supportive of the CRSA in 2017. “If there’s a 305 race that’s close to home, we’ll go support the CRSA,” Flint concluded. “They’re a great club and a good bunch of people to race with but it’s definitely better for us to keep moving forward; keep progressing. We just want to be a serious threat this year and learn as much as we can. I think we’re ready.”