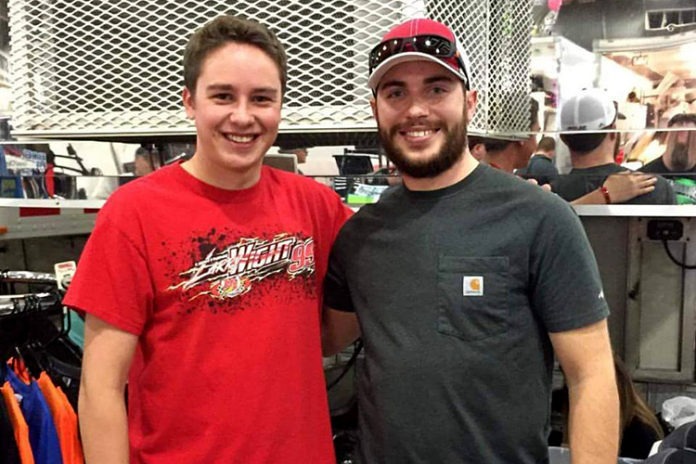 Have you ever had an out of body experience?

You stand back for just a second to say what just happened?

Is this for real?

Today was one of those days for us. Having IHOP for breakfast may not have been my best idea ever. Sometimes being the only female traveling on these trips can be trying, especially after meals and a night of beer. (Thankfully I still have my eyebrows)

We arrived to the expo center around 12:30. Sean and Sean were wrenching away already! The guys jumped right in to help. They went through and nut and bolted the car and lubed the rod ends and driveshaft. All of this to ensure there are no binds in the car.

Last year when we were here we were pitted next to Zach Daum. Dave Reedy is good friends with Zach, introduced Larry and of course has kept the relationship alive this year.

Zach is unbelievable to watch and extremely knowledgeable. Zach and Larry spent some of the early afternoon discussing suspension and set up. Any questions Larry had, Zach was more than willing to help.

As promised Christopher Bell was supporting his Larry t-shirt he had got from us after Eldora.

Christopher explained to us that before seeing Larry here last year he never really knew much about big-block Modified’s, but once Larry ran his heat in last year’s Chili Bowl everyone started asking each other who Larry was. No one had a clue and they all starting to do a little research.

Since then Christopher told us he has been following Larry. He also expressed an interest in possibly running a big-bock at some point this year if his schedule allows, maybe even while the trucks and big-blocks are at Eldora.

Wouldn’t it be awesome to see Christopher Bell in a Gypsum Express big-block Modified 99B?

Isn’t it funny what makes us race fans get excited?!

John Baumes, one of our Super DIRTcar Series officials and his wife Christa make the trip here every year. To see a familiar face is so refreshing! Plus they are decked out in Lightning Larry gear.

Larry’s older brother John was able to get his work schedule moved around so he would be able to come and watch Larry qualify tonight. John lives in North Carolina so we do not get to see him nearly as much as we would like to. The support and comfort that having John here added for Larry was unbelievable. Of course Larry has a great crew here standing behind him as well as myself, but to have his older brother here gave him that little bit of reassurance he seemed to be lacking.

At 2p.m. they began calling the drivers to the draw. Larry drew number 52. This placed him in heat 3 starting 5th.

Qualifying nights are based on passing points basically pass as many cars as you can and maintain the position. Larry finished 3rd in his heat. Larry said the car was too loose for his liking.

The majority of these teams rely on their extensive sprint car knowledge when it comes to set up in these cars. Although to make the adjustments our team felt necessary they implemented some big-block knowledge.

At some point between the heat and the qualifier Daryn Pittman stopped over. Sean M. introduced Larry and Pittman to one another. “Oh I know who he is I’m a fan after last year’s run” Pittman said.

Now he moves on to the first qualifier staring in 8th. Larry finished in 3rd between his heat race and his qualifier finish he had accumulated enough passing points to roll off in position 7 in tonight’s A-main!

He only needs to finish third to be locked in to the 31st Chili Bowl!

Everyone on the team was ecstatic! But it’s time to get to work!! The guys were applying even more big-block knowledge. At just the right moment TMac stopped in. After discussing some of the changes being made TMac reassured the team that he was confident in their decision to apply these changes.

Next thing you know the A-Main was rolling out on the track. 25-laps stand between us and a locked in position.

Pat, Skye Michaels, John and I sat along the backstretch which is where the majority of the pit seating is located. This was the longest 25-laps I have ever experienced!

Larry began the race running the bottom until he was passed on the top side.

Now he was on the top side and up to sixth. He ran the top side until the first caution flew. We could see Dave Reedy giving Larry hand signals. Larry started adjusting his shocks from within the car. This is an advantage midget’s offer over big-blocks.

On the restart he charged to the bottom quickly securing position number five. Now the anxiety was getting high! We were all shaking, cheering, covering our eyes, and at times holding our breath.

Caution was out for a hit cone, this is an automatic black flag to the individual who has brought out the yellow. They restack, green flies and another caution for a hit cone.

Every time it’s a hit cone you just want to crawl under the stands. You don’t want to see your driver sent to the rear for something as silly as hitting a cone. This time it was the car that was coming up on Larry fast, eliminating him from our immediate worries.

Green is out again, Larry is maintaining a solid fourth. Unfortunately for Kyle Larson as he was battling for the lead he got upside down in turns three and four.

Larry was now up to second.

Here we go! Skye and I have tears in our eyes. Is this really going to happen?! For such a small track these next eight laps sure did take forever and Zach Daum is coming!

Four to go Larry went to the top side and the car wasn’t near as fast. Out of the corner of his eye he could see Daum at his left rear tire. Larry quickly switched lanes and went the bottom to attempt to hold him off for the next three laps.

Fortunately the plan worked! At the line Larry finished second securing a position in the 31st Chili Bowl.

This is something not all drivers can say they have done. Not only is this only Larry’s second Chili Bowl appearance, but only his second time in a midget car. Also this is Sean Michael and Mike Heffner first midget car to make an A-Main appearance here at the Chili Bowl!! This team more than deserves it!

There are 375 entered drivers here this week. All hoping to secure a spot in Saturdays feature. Larry has secured his spot, he will be one of the 24 lucky individuals to compete for the desired Golden Driller trophy.

The support from back home has been overwhelming and we cannot thank you all enough! Without all of you checking in letting us know you are watching and cheering us on from back home we would not have enough confidence to come here and represent the Northeast racing community. We hope each and every one of you are able to watch this Saturday night on MAVTV starting at 8:30pm EST.

A few more shots from the track:

Ride along with Larry during Tueday’s A-Main: