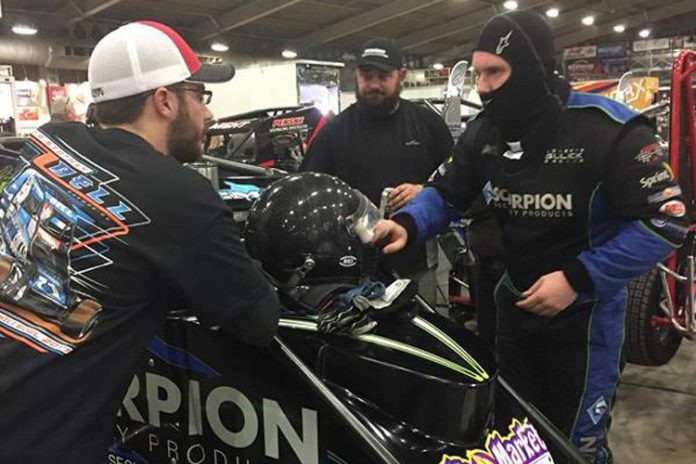 What a difference one day can make!

We have went from stressed about the littlest thing to now just hanging out, being race fans for the next few days.

From all of the text messages, phone calls, and social media messages we again would like to say thank you to each and every one of you!

A very large component to conquering something of this caliber is the emotional and mental game that accompanies it. Since the support has not stopped coming our way our team has been able to maintain a level head as we charge forward in the race for the Golden Driller.

On Wednesday the Triple X house car #99 was racing out of our pit so after getting lunch we made our way over to the track to help out. After a long night of battling the #99 driven by Colton Heath finished 16th in the first C Main.

The #31 Travis Berryhill followed by Jake Swanson and Colby Copeland were able to secure their spots in the 31st Chili Bowl.

Thursday night 96 cars had drawn all hoping to finish in one of the top three positions in the nights A-main. Larry’s teammate for the week, Coleman Gulick, was set to roll off in heat 11 starting second. Coleman is from Binghamton, N.Y., and has spent the majority of his racing career following the USAC Wingless Sprint Series.

In 2017 we can expect to see Coleman back in the Northeast following the Empire Super Sprint Series. Gulick is accompanied here at the Chili Bowl by his parents, Crew Chief Josh Carpenter, and longtime friend Parker Evans.

Gulick won his heat as well as his qualifier and then went on to start the feature in position number sixth. Coleman completed the feature in 16th. Our friend Christopher Bell, Danny Stratton and C.J. Leary finished in the top three of the A-Main thus guaranteeing their starting spot in Saturday’s race.

Both Heath and Gulick will resume racing toward the Chili Bowl A-main beginning Saturday morning.

As the week continues on you cannot help but to miss home and all of your loved ones. Larry and I took advantage of some down time during racing tonight to Facetime with our family back home and our adorable little pup Lola.

Chuck and Kelly Hebing arrived Thursday afternoon to enjoy the remainder of the weeks racing. To see familiar faces in a sea of strangers is unbelievably relieving.

Last year it seemed like the expo wasn’t all that packed until Friday night. This year the crowd has been unreal since the very first day and it continues to grow. When you go up to the stands to sit down you have to start heading up at least ten minutes prior if you want any chance of seeing cars on the track. Once you are in the stands you are then committed until all of those heats or qualifiers are over unless you enjoy crawling over top of people because nobody is moving.

Skye Michaels spends the entire week prior to the Chili Bowl cooking food for the hauler. The spread she puts on for all of us is truly awesome. From the pasta salad, meatballs, sausage, pulled pork, over 600 Jell-O shots and so much more if you go hungry it is your own fault.

This past week has been some great racing.

First on Tuesday Kyle Larson flipping while running in second in the A-Main.

Wednesday night Rico Abreu the winner of the past two Chili Bowls finished 10th in a B Main. Not even qualifying for that nights A-main race. Rico will have to race his way in to the feature on Saturday or use the past champion provisional. Sammy Swindell as well as first time Chili Bowl participant Donny Schatz also not qualifying.

Today at the Chili Bowl is Turn the Bowl Pink day in honor of breast cancer awareness. The group in charge of organizing the event has a bulldog mascot named Mavis Pearl who stopped by for some racing today.

T-Mac kicked off his night in heat race #9 starting 5th and finished 4th. Can’t wait to see him get out there and continue put on a show the rest of the night! After tonight’s A-main is complete Larry along with the other 11 guaranteed Chili Bowl Drivers will compete in a Pole Shuffle. This will determine the lineup for Saturday’s A-Main. (Larry will start seventh).

The Chili Bowl is something that every race fan should experience at least once!

It is six days spent in one building, for a minimum of 10 hours each day, among thousands of people that share the same passion for racing that you do! It doesn’t get much better!

As Saturdays feature time is only 24 hours away the anticipation and nerves have set back in. Wish us luck!!