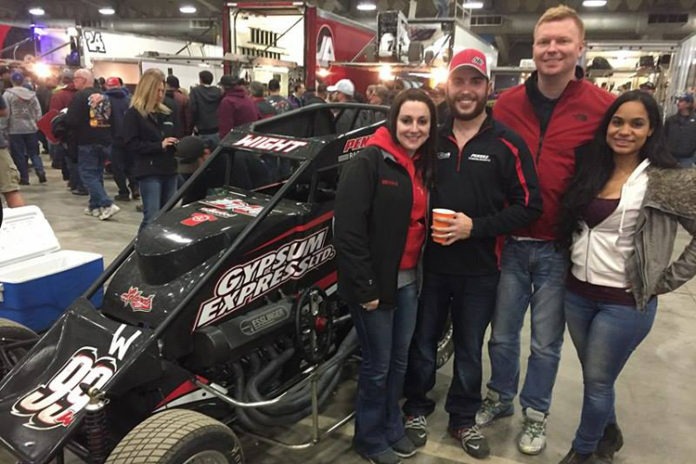 By BROOKE AND LARRY WIGHT

Friday night after the A-main the twelve guaranteed cars moving on to Saturday’s feature were set to square off for their starting positions in the Pole Shuffle.

Like most of the events this week we were confused by the pole shuffle since we are use to a simple redraw on the front stretch.

So to the best of my ability here is what it’s about. Two at a time starting with the drivers who drew numbers 11 and 12 there is a three lap shootout. Whoever wins the three lap race then advances their Saturday starting position and continues on to battle the next driver for the next starting position until the starting line up has been determined.

Larry had drawn to roll out 6th in the shuffle, this meaning he wouldn’t start any worse than position number seven on Saturday. Larry was facing off with Danny Stratton after just one lap Larry decided to pull in as he felt the car was too loose and didn’t want to risk any damage to the car. This locked him into starting position number seven for the 31st Chili Bowl.

Once arriving to our pit the guys starting putting their heads together. Larry felt the car was loose. Scott, Jake and Pat who are use to big blocks agreed with Larry. They felt that they needed to tighten the car up from the way it was reacting.

Sean and Sean who are use to sprint cars felt the complete opposite. They felt that Larry wasn’t able to get into the corner the way he was wanting to because he was way too tight. After combining both teams years of racing knowledge they were able to come up with a set up for hot laps that everyone was comfortable with.

Larry’s brother John just couldn’t stay away and flew back in with his girlfriend Yoya for Saturday’s race. It meant the world to both Larry and I to have them here standing next to us.

Racing began on Saturday at 8 in the morning. This is the longest day of the week. The schedule consists of up to the C-mains being completed before going live on television. This can be extremely time consuming. This year they began running them off with the two O-mains.

Larry was awarded with the Jason Leffler “Elbows Up” award.

Then Larry and Coleman Gulick carried the New York State flag in the parade of flags.

Shortly after he was called to the stage to do an interview. During this interview Larry implied that he will be looking to do some more sprint car races this year, testing with the midget, along with his weekly Big Block racing.

I would be lying if I said I wasn’t nervous. I’m not even sure if nervous is the correct word. As each minute goes by it is harder to breath and I feel sick to my stomach. It is not that I worry about Larry’s performance, if he finishes last I will be just as ecstatic as if he won.
I feel as if we won the Daytona 500 just by qualifying. All I worry for is his safety! In the blink of an eye the outcome of the race changes here. It is such a small track and leaves you very little reaction time. In the end I just want to be able to hug him afterwards and tell him until I am blue in the face how proud of him I am.

After hot laps the team seemed very pleased with the car. Coleman headed out in the second C main starting in position 11. He finished in 10th, unfortunately ending his chance at this years Chili Bowl.

One thing I have been impressed with is when it comes down to it the officials here just don’t care who you are the rules are as they stand.

There are no politics or special treatment for only certain individuals based on who they know. The race outlines are simple, race your way in or watch from the stands with everyone else. Only one provisional is given to the previous years winner.

Kyle Larson stalled in a C-main and he gets sent to the rear just as everyone else would have.

Food for thought, maybe this race attracts upwards of 350 cars since it doesn’t offer special treatment to only certain drivers and only implement rules some nights?

TMac was in the first B-main starting 9th. Top six in both B-mains in transferred into the feature. Unfortunately Timmy’s night ended after another competitor spun in front of him leaving him no where to go.

This is it the B-mains are over, the field is set. When the lights go off, the tunnel is going to light up the ramp leading onto the track and they are going to announce my husbands name amongst the other 24 drivers starting in the 31st running of the Chili Bowl!! The feeling is surreal!! The love from home continues to flow in making us beyond grateful to be part of the loving racing community.

The green flag drops and it’s on.

The bottom was the lane of choice until Daryn Pittman chanced it on the top during a restart. Pittman blew by Larry as well as multiple other drivers on his way to second. Larry decided to move to the top after the trail of cars following Pittman had cleared. Larry said the car felt great on the topside he just didn’t feel comfortable pulling a slide job as he would rather have a respectable finish rather than knock himself and other competitors out of the race.

Lap 43 yellow is out. Larry realized the motor was overheating. After signaling to Sean Michael’s they decided to complete the last 12 laps. Due to the motor laying down the car began to tighten up. Larry worked to maintain his position rather than chase down Damion Gardiner. Ladies and gentlemen Larry Wight just completed the 31st running of the Chili Bowl in position number 13.

The pits were packed after the race making it difficult to begin cleaning up the hauler or loading the cars. But we weren’t in a hurry anyways. Larry and I stopped over to talk to Zach Daum, thanking him for all of the advice over the week. He is one of the coolest people I have ever met in racing. We also went over to congratulate Christopher Bell on his win after the pits had cleared out.

As the night came to an end Larry and I learned the devastating news that our Gypsum Racing family had gained an guardian angel earlier that morning. William “Blow” Bulger was a special member of our racing family who will always hold a special place in all of our hearts.

As I sit here now in the airport waiting to fly home I look around at Larry, Scott, Jake, Pat, John and Yoya. I think how lucky Larry and I am to be part of this team, to be blessed with such great friends, going home to a family that loves us so much and supported by our race family. Sean M., Sean S., Skye, Dave Reedy, every last one of you at home thank you!
It truly doesn’t get much better.

Editor’s Note: DTD would like to thank Brooke and Larry for going above and beyond in providing our readers with something very special and unique. The inside view of the behind the scenes feelings of racers, families and crews is rare. Thank you from all of us at DTD for your effort and congratulations on your success in qualifying for the Chili Bowl A Main.