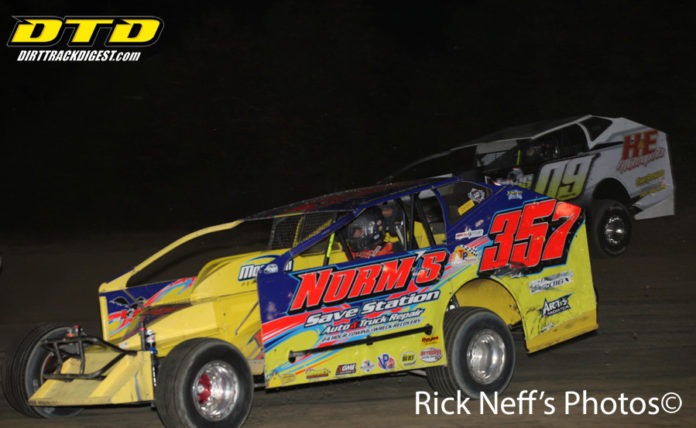 For Oley, Pa., driver Duane Howard, 2016 didn’t quite pan out the way he thought it would. Although some drivers would love to finish the year with eight total wins, for an elite driver like Howard it just didn’t quite cut it. But probably the most frustrating thing regarding last year was how it all played out mid-season.

After starting out the season in the Mike Petruska and Sons / Atlas Paving #66 with wins at Grandview and Bridgeport it looked like it was going to be a good year. However, during the summer months the wheels seemed to come off the cart and the team was mired in a slump. They tried changing their Saturday track from Grandview to Bridgeport but engine problems started to pop up and the powerful tandem seemed to lose their confidence in each other. The Atlas team decided that a change was in order and Duane was let go as their driver. For Howard it was the first time in his career as a driver that he ever had to go searching for a ride during the season.

Howard had been driving the #357 for owner Norm Hansell on Friday nights at Big Diamond and when Howard was released from the Petruska ride Hansell stepped up to offer Howard his car to run on Saturday’s at Grandview as well.

The team had some good runs at Grandview and picked up a win after only a couple of weeks, but Howard was still having trouble adjusting to the Bicknell Chassis that Hansell was providing for him. Howard had been running Teo Chassis cars for the better part of the last two and a half years and it was a big change and challenge for him.

Howard, like most drivers, has always been a better driver when he has confidence in himself and the car underneath him and last year after the team’s strong start the driver’s confidence level dropped when the team started to struggle.

“We had a tough middle of the year,” said Howard.  “Then three quarters of the year everything got disrupted and I just couldn’t get back in a good feel as far as mental and everybody involved, including the race team.  It all just got in disarray so it just took awhile until we got refocused and got back to know that we had a good race team and know that I could still drive these race cars. Because for me as a driver when I am not confident I am not good and as a driver I lost some of that confidence. At the end of the year I started to get some of my confidence back and I’m really, really eager to get this season going. They always say when things are down and out that good things come out of it and I think that’s what’s gonna happen. I have a lot to reprove that I am not down and out yet and ready to hang this racket up yet. So I am eager to get back to prove that I am still a good race driver. When you are down on yourself, you don’t race well, you make mistakes and that’s where I think I was at last year until the end of the year when I started to get some of that confidence back.”

The new team started to hit its stride late in the season with a small-block win at Georgetown Speedway and closed out their season with a hard fought big-block win at Bridgeport Speedway. With those two late season wins the team is looking forward to getting their season started on March 11th at Georgetown Speedway in the opening race of the STSS South Region.

“We are ready to go; we will have two cars at Motorsports this weekend. We are in good shape for the season and I really wish we could start the season tomorrow. We had a good ending to the season with wins at Georgetown and at Bridgeport. I finally started to find a feel in these Bicknell cars that I liked. We just got another new Bicknell that we are going to try and focus on Grandview with. We would love to go to Florida but obviously with my job working for the township that’s not possible this time of the year and honestly it for what they pay it’s not really worth it.  But it’s still nice to go away like that in the winter and get some racing in.”

Along with a new Bicknell car they just picked up for action at Grandview Speedway, the team also has their Bicknell chassis they used at Big Diamond Speedway. For big-block specials and the STSS the team has a two race old Bicknell all ready for the track. Providing the power under the hood of the team’s stable of Bicknell’s is Morrison Performance Engines. The team will have a couple of 358 PA Spec motors along with an open small-block and a big block for their use.

The Hansell / Howard team struggled at Big Diamond last year and completed the year without a victory. Howard is hoping they can come up with a combination this season that will get the “Diamond Cutter” back to the winner’s circle.

“This team really struggled most of the year at Big Diamond; it’s just so hard with these spec motors to get any kind of an advantage on the field. Hopefully Morrison can come up with something a little bit extra and different for us there this year to be able to show the kind of team this is. You need to have a good package to run there along with a strong power plant that can give you that little edge there at Big Diamond or you are going to finish where we did all year in that fourth to seventh place range which just don’t cut it for me.”

Howard and the team have an ambitious schedule laid out for themselves. Along with weekly competition at Big Diamond and Grandview the Hansell / Howard team will also compete in the Brett Deyo STSS South region races along with other special shows in the NJ/PA/DE area.

“We are going to focus our efforts on Big Diamond and Grandview and to go along with that we think we have a good package to be able to contend for the STSS title. Like I said earlier it took me awhile but I finally was starting to get a good handle on these Bicknell cars and what I need for a set-up to go fast at the end of last season. Norm has a very good open small-block motor for the series and we will get the big block motor freshened up so it’s ready to go. We should be hopefully be able to get off to a strong start and if you can do that it helps you carry on through the year.”

And if the schedule the team has laid out for the year isn’t enough Howard has already starting working on a plan for some of the bigger ending season races.

“We are in the process of putting together a pretty interesting package maybe for the end of the year. We would like to do Charlotte and probably Fulton and some of the other big races. We’re already working on that. Norm has an interest in going to them and some other things maybe might develop to where we can have a good thing for the end of the year so I am already working on that package. Norm has really good stuff and it just matters how we utilize his equipment. If we upgrade the motor department a little bit as far as equipment wise we are good. It’s just a matter of the team adapting to my driving style and if we add a little bit at the end of the year to go to some of them places it’s something I am honestly looking forward to. Whatever happens I am sure Norm will be involved.”

After a tough 2016 season, Duane Howard is really looking forward to 2017 and seems to heading into the upcoming season with a renewed confidence looking to prove to his detractors and himself that he is still an elite driver on the local NJ/PA circuit. If the #357 team can get off to a strong start that will go a long way to Howard achieving that goal.

As always, I can be reached by email at dirtracefan25@hotmail.com or on Twitter @dirtracefan25 for any questions or comments.