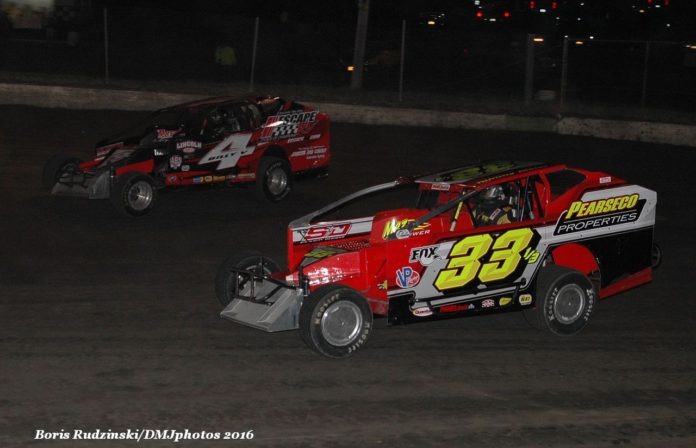 There were only three weeks left in the big-block modified point season at the Orange County Fair Speedway in Middletown, New York and for Tommy Meier, between his big-block and small-block modified efforts, the opportunity for two track titles in one season was very much in play.

As he strapped in, a ritual which he has performed countless times over the course of his career, the number-crunching came to an end. The strategic manner of how to amass points faded from his thoughts. Only the task at hand mattered as he pushed in the clutch and started rolling off onto the speedway surface.

Had this night been a Hollywood script, the sweat on his face would have perforated his visor; his gritted teeth would have shown through behind his helmet as he charged through the field with resolute speed and indelible determination. Instead, the pinion gear in the rear-end of his modified broke as soon as the green flag flew. His race was over literally before it even started.

There are two types of people in racing; those who stare at the aspect of failure and accept it, and those who look it in the eye and smile. Tommy Meir, a 30-year veteran, is certainly the latter of the two.

“We were leading the points when the pinion gear broke,” stated Meier. “We ended up being the first car out that night and that DNF was a big hurt for us.” Not to be deterred, the driver of the infamous No. 331/3 came back the following week on mission rather than on life support.

“We actually went out and won the following week,” Meier continued. “We knew that going into that last night with our big-block was going to be a longshot and we knew that we were going to need those guys to have some trouble to help us out a little bit and lo and behold, they did.”

Heading into the final night, Meier understood that he could secure the second small-block title of his racing career as long as he finished the race, however, it was the big-block title that was very much left in doubt and had the fans on the edge of their seats. It didn’t take long for the drama and anticipation to build.

“Our heat race couldn’t have gone more to plan that night,” reflected Meier. “I ended up in a handicapped spot and Jerry [Higbie] and Stewart [Friesen] fell short which put them farther back in the field. That could have been the championship right there.” If the heat race was any indication, Meier quickly began to believe in miracles as the odds had suddenly begun to shift in his favor.

During the first few laps of the big-block modified feature that night, a huge crash collected championship hopefuls Jerry Higbie and Stewart Friesen. Though both were able to repair the damage and soldier on, Meier had no clue where anyone was in the field after that. The only item of certainty was that he needed to pass as many cars as possible if he had any change of pulling off the championship in improbable fashion.

“I saw the Halmar car in the second turn being towed off and I thought it was Stewart,” said Meier. “I thought to myself ‘man, we really have a shot now.’ It wasn’t him, it was Jimmy [Horton] but he [Friesen] was all bent up and struggling to race the thing and I made it through unscathed. I took more risks than I normally would that night and we had luck on our side for sure.”

Not only did Meier pull off an underdog big-block title, but he succeeded in capturing the small-block title as well. Sweeping both of the top two divisions at Middletown is something that only Chuck McKee and Brett Hearn have been able to accomplish. Needless to say, Meier is now in the record book with some pretty impressive company.

“It’s pretty cool to win them both in one year,” He continued. “It’s not like it came without a lot of time put in. It takes so much to win a championship and there are so many unknowns like when do you change things, how do you make the right decisions and not to mention the amount of work it takes to run two separate cars in two different divisions.”

Meier attributes the majority of his success not to himself, but to those who surround him on a weekly basis. “Anyone who races these cars knows how much work it is,” stated Meier. “I was able to keep one car up at Jeff’s [Behrent] and he took care of that in his shop while we kept the small-block down at my place. Splitting the labor up like we did made it workable. If we didn’t have two different garages to keep our cars in, we never could have run two classes.”

With three decades of experience and memories under his belt, Meier looks back at the past 12-months more fondly than any other moments in time during his career. “The past year has been the best for me, hands down,” He said. “Winning Eastern States in 2015 and then coming out of the box strong in 2016 and winning both championships has easily made the past year or so the best of my career.”

As impressive as his 2016 triumphs were, what’s even more impressive is the unorthodox manner in which they were achieved from a technical stand point. “We’ve been on the same exact setup for almost a year now,” stated Meier. “That’s almost unheard of but it’s been working well for us so we’re just kind of sitting on it and just trying to keep everything right.”

His year-old setup quickly turned from familiarity to comfort throughout the 2016 season and it’s something that both the fans and his competitors noted duly as the year went on. “The chassis is a perfect fit,” He continued. “The shock package is right where it needs to be and we basically leave it alone. I know how the car feels, I like how the car feels and that in itself is a huge game changer on the track.”

Luck played a larger part in his success last year off the track as much as it did on and to add validity to that statement, one only has to look to the amount of proverbial bullets that were dodged throughout the year. “We knocked the front end off the car one week and needed a clip,” Meier recalled. “We came back running just as good which is almost impossible. We had everything measured that you could measure but sometimes you just can’t make it the same but we were lucky. So far, so good.”

From the very beginning, racing has always been a team sport for Tommy Meier; in all actuality, it’s the only way he knows. “I don’t know if we’ll be back with both cars in 2017,” commented Meier. “We’ll keep running for as long as we are still having fun with it and we have the guys to help us out. I couldn’t do all of this without them. Racing to be competitive and fast and racing for a championship are two totally different approaches. We’ll weigh the risk and then we’ll see.”

Aside from the company he keeps where drivers like McKee and Hearn are concerned, Meier is also in a league of his own in the history of the Orange County Fair Speedway in another respect. As of 2017, he is the only driver to win a championship in every division offered at the Middletown facility from the street stocks all the way up to the big-block modifieds. He’s literally won in everything he’s ever raced. Not many drivers will ever be able to match that statement.

As for whether or not time is on his side at the age of 51-years-old, Meier has no limits where his future is concerned. “As long as there are people that I enjoy racing with I’ll continue racing,” He concluded. “It’s no fun doing it by yourself and right now we have a great group of guys all the time so we’ll just keep going along.”

And keep going along he will; known as the man who overcame the impossible to sweep both the top modified divisions at the place deemed as nothing more than ‘The Hard Clay.’

Matt Noles is a contributing writer to Dirt Track Digest, Racer’s Guide and Speedway Illustrated. He currently resides in Sprakers, New York and can be reached via e-mail at matt_noles@yahoo.com

Kim Forcellina is a contributing photographer to Race Pro Weekly and an aspiring writer. She currently resides in West Milford, New Jersey and can be reached via e-mail at kforcephotography@gmail.com