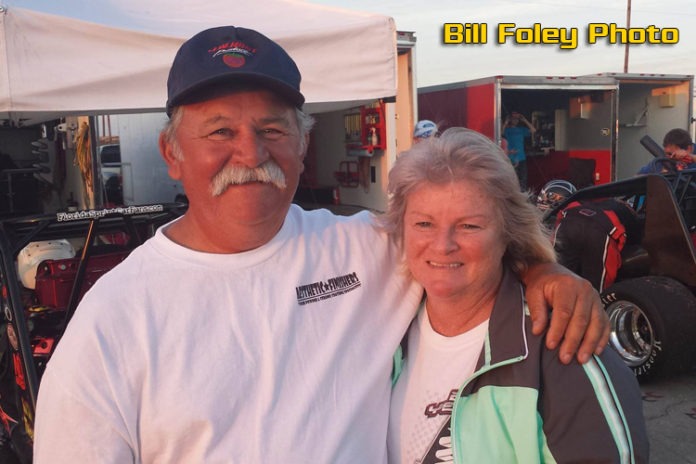 “Can I do a brief interview with you,” I asked the legendary Jack Hewitt.

He said with a smile, “No there is no such thing as a short interview with me. I like to talk. I don’t always think about what I am saying, but certainly we can talk.”

Hewitt is from the pre-political correct days and is one of the colorful characters that made racing what it was.

He has been to Indy to run the 500, won all four races at the Eldora Four Crown Nationals and continues to be involved in the sport as competition director for the Ohio Sprint Car Series.


This past Saturday night he was visiting DeSoto Speedway as the track conducted the Smith Memorial event in recognition of the late Willard, Daryl and Robert Smith who were legends in the Sunshine State.

Hewitt was working on the Sprint Car of Darrin Miller who had come out of a five year retirement to honor the Smith family. He was behind the wheel of a Johnny Gilbertson back up car. Darrin was Rookie of the Year in 1998 at the Little 500 in Anderson in the days when Robert Smith, Larry Brazil, David Steele and other Floridian Wayne Reutimann were forces to be reckoned with.

Ironically, ’98 was the first year that Hewitt had qualified for the Indy 500.

Reflecting on that experience, Hewitt said, “For years I had been trying to get a ride for the 500. It was a long haul and I had no marketing value. I was just a racer with long hair. IRL needed drivers and I had the opportunity as the year before Steve Kinser was in the field.”

Continuing he said, “Bob Parker and PDM Racing gave me the opportunity and though we weren’t the fastest we did have the most fun.”

He had an experience he will treasure forever and in fact was invited back for the huge autograph session a few years ago during the Indy Centennial.

He noted the changes as Indy which didn’t help drivers like him. Hewitt said, “Roger Penske wanted corporate images as drivers. He was not hiring race drivers as he said he could train the image guys to drive cars. I was 42-years-old when I was a rookie at Indianapolis and I worked very hard to get there. I will never forget that.”

The majority of race fans think about dirt tracks when they hear the name of Jack Hewitt.

He pulled off one of the most sensational efforts at Eldora Speedway in 1998.
Jack said, “Eldora was my home track. I grew up 35 miles from there. And in 1998 at the Four Crown Nationals it was just my night. Everyone has a night and that was mine.”

Hewitt set the racing world on its ear by winning, not one, not two, not three, but all four feature events on the legendary speedway.

He said, “Everything was going my way. I bounced it off the walls, ran where I wanted and zigged and zagged perfectly.”

Jack remembers the night like it was yesterday. “The midgets were first and I had a stelt race car owned by Bob Parker. Started 12th and ended up winning. There were several other top midgets there and it was a magical race.”

It was then on to the sprints and Jack explained, “I ran Bill Biddles’ car and started 10th. I got the lead quick and just went different places than everyone else. Tony Elliot passed me down low, but I was able to move back up front and get the win.”

The mods were up next and he started fourth and took the lead by the third lap. His experience on the track was really paying off.

Silver Crown was the fourth and final and Jack said with a smile, “I started in the front row and led every lap. It was just my night.”

Jack has been one of the cornerstones of Sprint Car racing. He said, “Back when the Outlaws started I would run with them. I remember Ted Johnson started the Racers one year and followed with the World of Outlaws along with Lanny Edwards and we ran the first race.”

He loaded his car on the open trailer and hit the road to run against the best the Sprint Car nation had to offer.

Reflecting he said, “The three toughest drivers I have raced against were Steve Kinser, Sammy (Swindell) and Rick Ferkel. There were others who were tough including many of our local racers in Ohio, but those were the best three.”

He noted, “Racing has changed over the years. We always were like family on the road and if one of us got in trouble there was always someone in the pits who would help you out to keep you racing. Today it is more like a business and that family type of relationship simply doesn’t exist at the level it use to.”

Hewitt carried the devil may care look well, but he feels he might have been misunderstood.

Jack said, “I had long hair and said what I thought. Many folks thought I did drugs, but I never touched the stuff. I was judged by my looks and that is unfortunate. In fact Lynn Paxton (Pennsylvania Sprint Car great) and I really didn’t get along. He was a clean cut quiet type of guy and I was far from that. However, I went up to the Eastern Motorsports Museum in Pennsylvania and he took me on a tour. We became good friends and I really missed a lot of good years of friendship because of just how we were both apparently so different.”

He does admit to one major addiction…racing.

Jack said, “There is a cure for drug addiction, but our addiction is expensive and very habit forming. There is no way to get racing out of your system once you are hooked.”

Hewitt comes from the era where Sprint Car drivers raced dirt and asphalt.

When asked about his favorite surface he said, “Smooth and patient are two key words when running asphalt and no one has ever used those words to describe me. So I guess you could say dirt is my favorite.”

Racing today is a far cry from what is was and for Jack that isn’t necessarily a good thing.

He said, “We have lost characters. Today there are no characters. Years ago Jud Larson, Mario Andretti, A.J. Foyt and others would sit on their tires by their race cars after a show. They would meet fans, sign autographs and that would bring fans back. We had open trailers and going down the road someone might see the car and follow it to the track.”

Today it is significantly different as drivers are hard to reach except for special occasions and the fans are missing that opportunity to put a face with the car.

In 2002 Jack Hewitt saw his career come to an abrupt end.

Explaining he said, “It was at North Vernon, Ind., and I got together with another car. I had broken my neck in 1993 and I broke it again that night. No one should go through wearing two halos in their life.”

He did hop back behind the wheel of a Silver Crown car at Eldora a few years ago, but dropped out.

Jack said, “Folks thought that I couldn’t do it or that I was too tired, but the car had a front end problem and I pitted.”

One tip Jack Hewitt has for a young driver is “get on the PA system whenever you can. Get your name up there. There are always people in the grandstand who might want to put their name on your car. You have to be visible. Get on the PA, meet people and you will be recognized. You can’t believe how much that can help you.”

Jack Hewitt is one of the pioneers of Sprint Car racing and at the age of 65 continues to dedicate his time to racing.

In winter time, he along with wife Jody reside in Crescent City, Fla., which is basically halfway between Volusia County Speedway and Putnam County Speedway. The rest of the year the Troy, Ohio resident is involved in the sport up north.

Hewitt enjoys meeting fans and noted it is a privilege to be asked for an autograph.

About asking him for a short interview?

You wouldn’t want a short interview with Jack Hewitt.