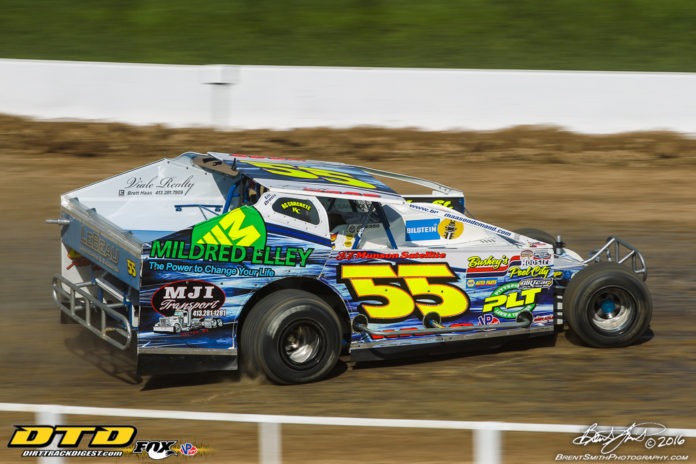 In the words of Calvin Coolidge, nothing in this world can take the place of persistence.

There have been scores of drivers in racing that had an abundance of talent, yet were still unsuccessful. In the same rite, there have been numerous drivers of incredible intelligence but even they were lost to the derelicts of time. Only persistence and determination, and nothing else, seem to create the most success behind the wheel.

In 2015, Lebanon Valley small-block modified competitor Brett Haas was simply known as ‘the kid that raced in the same division as Kenny Tremont and JR Heffner.’ By the end of the 2016 season, however, he’s now being known as a driver that can compete with the aforementioned adversaries proving that one time around the sun can bring about great change.

“We knew that we could compete at a high level,” stated Haas. “But last year was probably one of the years that we went out and proved to everyone else that we could compete with some of the legends of the sport. We were actually able to run with and challenge some of the big guys in the northeast instead of just being out on the track with them; they felt our presence.”

Looking back at the numbers for Haas, his words are merely a window dressing to what many fans and competitors found out over the course of the 2016 schedule. With a second place finish in points in the small-block division at Lebanon, [Valley Speedway in West Lebanon, New York] a top-ten finish in the small-block portion of Super DIRT Week at Oswego [Speedway in Oswego, New York] and a strong showing during Eastern States weekend at Middletown, [Orange County Fair Speedway in Middletown, New York] the driver of the No. 55 Teo Pro Car arrived in a big way.

“It’s pretty humbling to be honest with you,” continued Haas. “To finish second to Kenny [Tremont Jr.] and ahead of JR [Heffner] and 25 or 30 other guys is impressive. To be in the same category as those guys is unbelievable especially knowing how good their programs are. Knowing that we can race with them and beat them is a huge morale boost for our team and our marketing partners.”

For the first time in his young career, the Pittsfield, Massachusetts native traveled west in 2016 to try his hand at competing in DIRTcar’s biggest event for the northeast drivers; Super DIRT Week. It was an experience that brought a mild case of disappointment at first, but quickly turned into elation.

“Our main expectation was not to look like we didn’t belong there,” Haas remarked. “We kind of had are backs up against the wall from the onset really. We didn’t qualify well and when you’re starting 39th like we did, your goals and your mindset tend to change a little. However, once we started the race and starting moving up through the field, our attitudes changed.”

Though attrition may have played a minor role in the outcome at Oswego, Haas and his driving ability had a fair share of the attention as well and rightfully so. By driving smarter, not harder like some of his contemporaries, the young modified pilot began passing other drivers to the click of one or two per lap. At that rate, it’s awfully difficult for others not to take notice.

“Once we broke into the top-20, we just kept knocking them down,” recalled Haas. “Before I knew it, we were in the top-ten and to be honest, if the race went the full distance, we could have realistically gotten a top-five or better because the car was just that good. I wasn’t really confident going into Oswego but after, that’s a different story.”

With confidence booming, the driver of the Mildred Elley sponsored modified made a late-October trek down to the infamous ‘Hard Clay’ at Middletown. If his exploits at Oswego during Super DIRT Week marked his arrival, his run during the Eastern States weekend only solidified it.

“Aside from Lebanon [Valley], Middletown seems to be one of our strongest tracks,” Haas said. “I don’t know what it is really. We seem to have good but bad luck there; we always seem to have a fast race car but we just can’t seem to put it all together for one reason or another. We just can’t put the bow on top.”

Qualifying again left a little to be desired for Haas, after time-trialing 27th, but as he’s proven before, it’s not necessarily about where you start, it’s where you finish that counts.

“We had such a stout car last year,” He continued. “I thought I had a really good qualifying time even though we ended up back in the pack a bit but at least we were in the show on time which alone took a lot of pressure off. It really allowed us to focus on getting ready for the feature.”

Though Middletown is notoriously difficult to pass on, as he proved a few weeks earlier, when it comes to race time, Haas is more than up to the challenge. “It was just like Oswego,” explained Haas. “We just started passing cars lap-after-lap and before I knew it, a late-race caution came out and we were sitting in fifth with only a few laps to go.”

There are only a few moments in a racing career that have the indelible ability to leave an ever-lasting mark on ones psyche; the following few laps will be forever etched into the memory of Brett Haas for good reasons, and sadly, for unfortunate ones as well.

“I have never, up to that point, been in position to bring home a decent amount of money before,” Haas remarked. “I have never been in a position to win a race like that before and when the green came back out I took off. Unfortunately when we came out of turn two, the car stuttered and I knew it was out of gas. I couldn’t believe it.”

After coming in for a quick splash and go, Haas finished a respectable 14th. Though the results that were possible didn’t come to fruition, he served notice yet again that his one-car team was just as capable of winning a big race as anyone else. If anything, last season has done nothing more than to steel his resolve and bolster his confidence and rightfully so. The only question that remained heading into the off-season was simply, ‘now what?’

That ageless question, which every race teams asks themselves after every season, didn’t take long to answer. In fact, it showed up in the form of an announcement by King of Dirt series founder Rob Hazer. With the small-block modifieds now being brought into the KoD fold for 2017, Haas and company decided to make a move to a two-car team and join the ranks of the newly formed series.

“Logistically, the King of Dirt series was the best one that we could join without spending a lot of money,” stated Haas. “My main thing now is to follow the series for points and do well. I think it means more to say that you were the champion of a series than a champion at a certain race track. We’re looking for more recognition and trying to take our program to the next level.”

At this point in his career, Haas is looking to move forward and following a series may provide the interest in his program that he’s looking for. “We’re really looking for the next thing,” He explained. “We know we run really well at Lebanon Valley but we want to run really well with a series and I think that the King of Dirt tour is really the answer to the call that we’re looking for and hopefully this can open the door to some new opportunities.”

There comes a point in racing when the proverbial ‘old guard’ begins to retire leaving the door open for the next generation to take their place. For Haas, the excitement and prospect of this occurring has certainly landed on his radar and rightfully so. Simply put, he may find himself in the right place at the right time in the near future.

“I see this younger generation coming into the sport right now,” He continued. “And they’re able to compete with the more established guys which is impressive especially with money being such a big thing in racing. It’s good to know that there are young guys other than just myself that can go out there and wheel a race car. It’s promising for my career and the sport as well.”

With the start of the 2017 season right around the corner, Haas has more than a few goals to reach by the end of the year. One being the all-important and seemingly unattainable one of financial security. Improbable or not, he’s going to throw everything he has into making his dream a reality.

“I want to be at the point in my career where financially, I don’t have to worry,” Haas stated. “I want to be able to do 60, 70 or 80 races-a-year and open the eyes of one marketing partner or car owner that will allow us to go and compete in that many events. Seat time is so important in racing and the more I can run one of these cars, the better I’m going to be and I think I have the talent to take it to another level.”

If persistence and desire make memorable drivers, then Haas may be well on his way by the time the season closes in October. “We have great marketing partners and I can’t thank them enough,” concluded Haas. “The crew is great, the team is great and I know that we can go out there and turn some heads this year. I’m not as well-known as I’d like to be but I know we’re strong enough to put together a big year. I’m excited and looking forward to it.”