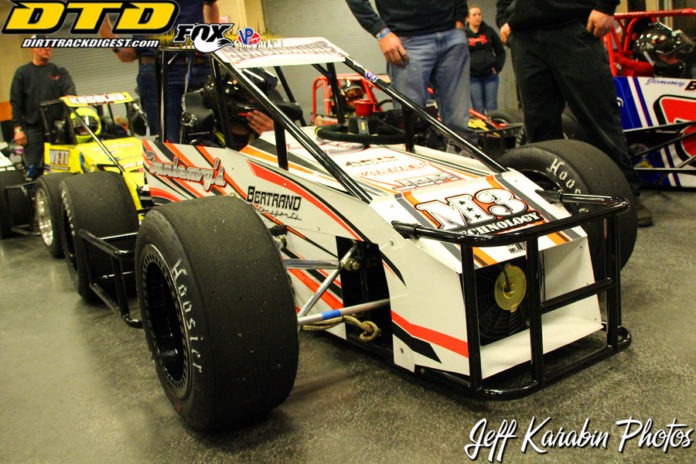 Justin Bonsignore road the hot hand on Friday night at the Boardwalk Hall in Atlantic City to an overall fast time in time-trials before backing it up with a win in his 20-lap qualifer. It was an impressive run considering they invert the top seven cars in each race based on time. Bonsignore was able to overcome that to score the impressive victory.

“I was a little worried starting seventh after the invert, but it’s their rules, their format,” commented Bonsignore. “We had a good car. It’s been really good all weekend. We’ve been able to keep up with the race track. We got up to third real quick behind Jimmy (Blewett). I knew I was in a good position to lock in there, but at the same time you want to knock another guy out and make him run those races tomorrow.  I’m happy with how it turned out.”

His team was able to keep up with the track throughout the night as the made huge difference in the outcome.

“The track was a little free for our race because we were the first ones back out after the karts and the Slingshots,” he said. “They tend to peel the rubber up it seems. We kept up with it, kept on top of it. I’ve felt pretty well since we unloaded. The car has a lot of speed.”

The only thing left for Bonsignore is a dash inversion that could see him start anywhere from the pole or as far back as ninth. From there the focus moves to winning the Gambler’s Classic.

“I see more eight’s than zero’s, but I think a zero or a three would work,” joked Bonsignore. “My odds are not looking to well. I’ve spun that wheel a lot of times from the pole in the karts and it’s never worked out for me. We’ve been doing well at the race track and the casino so hopefully it carries for at least 24 more hours.”

Christopher from Last to First

Ted Christopher locked into the feature based on an impressive drive from the rear to the front. The Plainville, Conn., driver was sent to the rear for spinning another driver. Christopher admitted afterwards that his throttle stuck causing him to get into the other car. From here his fate, like Bonsignore’s, may rest with the inversion for the dash.

“Happy to be in any of them really, but it’s really nice to know that you are in that deal,” stated Christopher about being locked into the Gambler’s classic. “Now the only bad part is you get penalized for timing good. You start seventh in the heat. Now you run the other thing (dash) and you have to wait for someone to do the stupid wheel draw. You get inverted. I should be second and my luck they’ll invert nine or whatever it is.”

For the 2017 indoor series Christopher teamed up with Trey Hoddick and company. On Friday night it was their best performance together and Christopher thinks they have even more for Saturday.

“This a good team,” cited Christopher. “There is no pressure. It’s a really good race car. They are real easy to get along with. Trey (Hoddick) and I have a great deal going with this thing. We’ve been fast wherever we’ve been. Hopefully we can put it all together here. That was a good race to come from dead last. Hopefully I don’t have to pass that many cars tomorrow.”

Christopher was running his fastest laps of the race near the end which will be key if he hopes to have success in the Gambler’s Classic.

“I feel pretty good about our chances,” he said. “I watched a bunch of the lap times and my fastest time was lap 20 when I got out into the open. That means I got a really good car so tomorrow should be fun.”

Zane Zeiner started his qualifying event from seventh after timing in the top four positions. The team struggled with issues earlier in the day, but luckily they got everything figured out right before their time trial efforts.

“We struggled earlier, we didn’t have any power,” mentioned Zeiner. “Right before time trials we got it back but the chassis wasn’t right. We made a big swing for that race and it went the way we wanted it to. I’m kind of pumped for tomorrow tonight.”

Although he’s happy to lock in, the team isn’t done making changes. He’ll make a few more adjustments during practice on Saturday to see if they can get even more speed out of his No. 23.

“This run takes a lot of pressure off,” stated Zeiner. “Tomorrow morning in practice we’ll try something for the feature. We did learn a lot tonight. I think we are going in right direction so as long as we stay with the track I think we’ll be alright.”