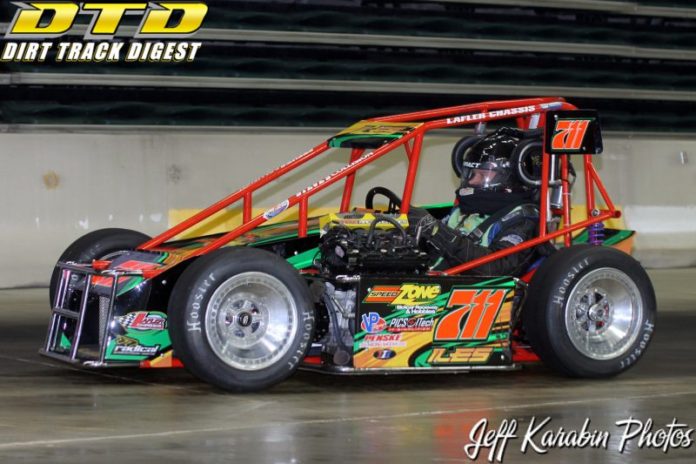 When scanning the field at any of the three Indoor Auto Racing Championship events in Allentown, Trenton, or here in Atlantic City, you won’t have a hard time finding a plethora of asphalt modified drivers seeing success among the field of stout TQ Midgets.

On the dirt modified side of things however, you don’t see very many guys stepping up to the challenge other than Erick Rudolph, who won the Battle of Trenton and is often considered one of the biggest threats to win at any of the three indoor events.

Joining him this weekend as some of the lone competitors from the northeast dirt circuit are Mike Illes and Mike Maresca, along with Ryan Bartlett and Richie Pratt Jr.

Pratt, who finished 17th in his qualifier and Bartlett who finished a fine 5th, are not yet qualified for Saturday’s Gambler’s Classic and will have to race their way in throughout last chance qualifiers this afternoon. Illes on the other hand is certainly in the show and Maresca is not very far behind him.

Illes, of Medford NJ, won the fourth and final TQ Midget qualifier on Friday evening, automatically locking him into the A-Main with Justin Bonsignore, Ted Christopher and Zane Zeiner.

Along with the four qualifier winners, the top five in overall point standings for the evening are also locked in to the Gambler’s Classic, but that list was not available at press time.

“Being locked in just means I’m gonna sleep a lot better tonight,” Illes said Friday evening in Boardwalk Hall. “It also means not fixing the race car. My guys just basically told me don’t wreck it so I’m happy to be locked in, I think this this is the first time we’ve been locked in in seven or eight years so this is great.”

“We sold all of my Big Block stuff so this is the only racing I’m doing,” Illes stated. “This is it, just this TQ stuff in the winter and then maybe a couple of outdoor TQ shows in the spring and summer but this is really all that’s on our schedule so we want to get it done.”

Looking at his indoor season, which so far has only amounted to one event, Illes has been quick in his Lafler Chassis ride numbered 711, but he’s had one problem at both Trenton and again last night in Atlantic City that certainly needs fixing; his power steering.

“Allentown we actually skipped, but Trenton was pretty good though,” Illes said of his 12th place run. “We actually had no power steering in the car for that race and with about 15 to go I had nothing left in my gas tank and couldn’t do anything. We do have power steering in this car for this race though which tonight really helped out a lot, but it only lasted about 10 laps so I was still pretty worn out.”

Locked in to the Gambler’s Classic with a legitimate shot to win, Illes just wants to “survive” and keep his equipment in one piece throughout the 40-lap main event on Saturday night and oh, fix that ominous power steering issue he has been dealing with.

“We’re in for tomorrow so I just want to survive,” Iles commented. “Survive and get the power steering fixed.”

Maresca, who now makes his hometown in Fayetteville NY, was another dirt modified guy that really turned heads in Friday’s qualifying action in Atlantic City.

The driver of the Rez Racing, St. Lawrence Radiology No. 7 Big Block on a regular basis, this winter is the first time the young campaigner has taken a stab at indoor events and it’s been so far so good for him in Atlantic City as Maresca drove his recently established No. 07 TQ ride to a 5th place effort in the third A-Qualifier on Friday.

“This is awesome to come out here and run these for the first time,” Maresca stated. “I can’t thank my Dad, Tom, Dylan and the Martins enough for coming out and helping me tonight. Without them, I wouldn’t be in this car and then also Mark Laffler helped me out a lot so without them I wouldn’t have the opportunity to go out and run like that. This is pretty cool.”

Maresca said he is happy just to be in the ballpark, let alone in the very top half of the 78 car field that is on hand this weekend, paying respects to fellow Big Block Modified driver Erick Rudolph for his accomplishments on the indoor side of the ball.

“Erick (Rudolph) dominates this stuff,” Maresca said. “Just to go out and even be close to him and have a competitive car means a lot. Hopefully we are in the show, or at least pretty close. Either way, we came down here and are having a ball of fun. We’re definitely going to keep doing this.”

More impressive perhaps, is that Maresca does not even have any prior indoor experience leading up to this weekend, less a few short laps at Allentown. The Clarkson University student missed the Battle of Trenton due to school tests and experienced some very unfortunate luck at the Allentown Indoor race in PPL Center.

“We didn’t go to Trenton because I had some tests that week for school that I obviously couldn’t miss,” Maresca recalled. “In Allentown, we actually had a different car, not this one. My throttle stuck though and I hit the wall pretty hard. This car we picked up Saturday and just kind of worked on it all week.”

The new ride, numbered 07 and formerly driven by asphalt modified standout Patrick Emerling, has proved quite strong for Maresca and his guys, qualifying 11th fast right out of the box on Friday afternoon.

“We went over everything on the car this week. Mark (Lafler) went over it and Patrick (Emerling) helped us out a lot too because this is his car we have here this weekend,” Maresca noted. “So, we just worked hard on it, came down on a whim, kept plugging away, got some speed out of it, qualified 11th and then ran pretty good there in the qualifier so we are very happy.”

Maresca’s only goal for Saturday’s racing is to just have fun, keep the car in one piece, and most importantly, ensure a spot in the Gambler’s Classic.

“Saturday I’m just going to keep doing what I’m doing,” Maresca said Friday night. “We just want to keep having fun. I’m going to drive the car as hard as I can and hopefully stay out of trouble. So that’s the plan. Having fun is really what it’s all about.”