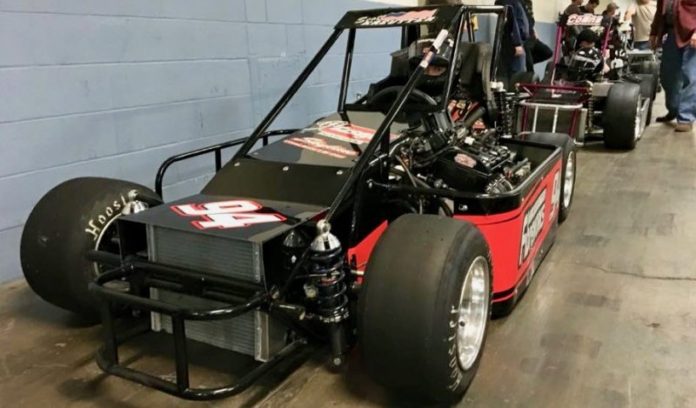 ‘The Straight Shooter’ Scott Kreutter has certainly made a nice impression this indoor racing season, but maybe not entirely in the way he’d like.

Kreutter, of Alden NY, has had to come from the back in each of the Indoor Auto Racing Championship A-Main events in Trenton, Allentown and most recently Atlantic City, putting together some impressive drives to the front of three very stout TQ Midget fields.

A former Patriot Sprint Tour USA Champion and multi-time 360 Sprint Car feature winner, Kreutter has yet to get that indoor glory in the Composites Fibreworks No. 94 ride despite several top five efforts to his credit including a 5th place finish at the Battle of Trenton in December and 4th at that same event earlier in 2016.

This weekend, Kreutter came very close to another top five with a 6th place run in Saturday night’s ‘Gambler’s Classic,’ but the way he got there was from easy, very much like the charge he made from the back of the pack in Trenton this past December.

Kreutter and team faced major challenges all weekend long in Boardwalk Hall, and those challenges really began to present themselves in Friday afternoon’s time trials.

“We were the first car out for time trials on Friday and the track just wasn’t very good,” Kreutter noted. “It really set us behind the eight ball for this entire weekend. The time trial was horrible.”

Time trailing in at a very abnormal 66th fast out of the 78 cars on hand, Kreutter had to line up at the back of the pack in his Friday night qualifier, which determined the direct transfers to Saturday’s main event.

In the qualifier, the nightmare start to Kreutter’s weekend continued as he went for a wild ride while trying to make his way to the front in the 20-lap preliminary event.

“In last night’s qualifier, we were actually running really good and passing cars on the outside,” Kreutter stated. “Unfortunately though, I got hit from behind, caught a wheel and for the second year in a row, flipped upside down into the grandstands.”

That incident took a major toll on Kreutter’s ride, which has been one of the few self-built efforts that have really impressed against the very established Lafler Chassis at this year’s indoor events.

Battling for a top ten spot in the point standings with the chances of making Saturday’s A-Main in major jeopardy, Kreutter and crew worked tirelessly Friday night into Saturday morning to make repairs to the No. 94.

“The frame was bent, we ripped the floorboard right out of the car,” Kreutter said. “We had to find a new radiator and we had a hard time getting it to fit, but then finally found one after doing some engineering. We then had to porta-power the frame back down, ran the last chance qualifier this morning and won that.”

Kreutter did not fair as well in his heat race though despite a strong run in the last chance event, only being able to drive from 10th to 6th throughout the ten lap green flag stretch.

“There really wasn’t much we could do in the heat race,” Kreutter commented. “It was green to checkered and I didn’t have much to work with, I needed a yellow.”

With only the top two from each of the six heat races going directly into the Gambler’s Classic, Kreutter was forced to run the B-Main later in the evening, but there was a break in store amidst his bad luck.

Sitting seventh in points heading into the weekend’s action in Boardwalk Hall, Kreutter would have the chance to use the “Highest in Points Provisional” to make the A-Main if necessary.

“With the B-Main, I knew we had the provisional to get into the big show,” Kreutter said. “But, I just went out there to see what we could do to the car to get it better. We kept our nose clean and didn’t pass anybody. Just kind of stayed there because we knew we were in the show.”

After finally making it there following a roller coaster of a weekend, the A-Main run put together by Kreutter made it all pay off, starting dead last and driving all the way up to that aforementioned 6th place finish.

“Tonight was great,” Kreutter said post-race on Saturday. “Every one of these shows this indoor season I have had to come from the back and pass a ton of cars, but it’s awesome. I would like to start up front so I could get a win but it sure is fun to wheel this car.”

Proving that he can without a doubt rub wheels with the class of the Indoor Auto Racing field, Kreutter hopes to be back next year with the same car if his car owner gives him the opportunity to do so.

“Next year’s deal is up to the car owner,” Kreutter stated. “I hope that Trey is happy with our performance throughout this indoor season and we can go back at it again next year. I would like to spend a lot of time on the car next year and I can’t thank he and Carl enough, they spend so many nights in the shop working on this thing and without them I wouldn’t even be here so I really have to thank those guys. My whole crew has come to every race with me and taken care of me and if it weren’t for them I’d really be behind the eight ball. My guys are great so I just have