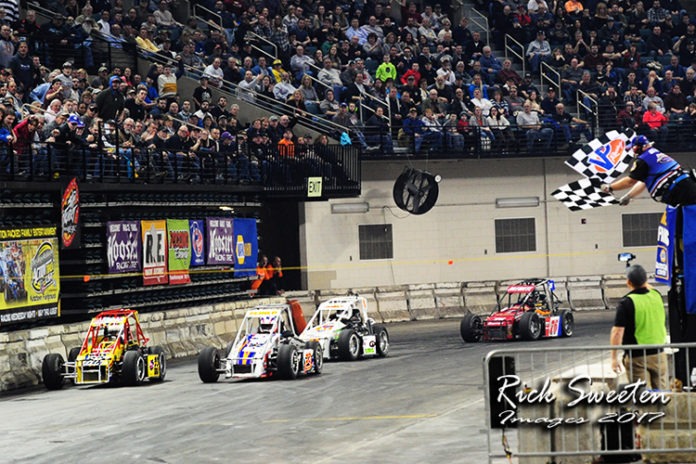 That was the margin of victory for Erick Rudolph over Zane Zeiner in Saturday’s Gambler’s classic at Boardwalk Hall in Atlantic City. The fact that Rudolph led from start to finish doesn’t tell the story of the final corner of the 40-lap feature. Zeiner dove low off the exit of the fourth turn after tapping Rudolph’s bumper. It wasn’t enough as Rudolph was able to just stay in front to capture his third career win in the event. He also took the checkers in 2012 and 2015.

“I had a good idea who was behind me,” commented Rudolph after the $5,000 win. “I knew there was some different ones in second and third place there, but the car went away a little at the end there. I felt some heavy pressure. I was just doing my best to get the job done.”

And get the job done he did. Rudolph needed to a run like this after a poor showing in Allentown which came after a dominant performance in Trenton back in early December.

“Means a lot, means a lot, especially after the last outing here where we weren’t able to get any wins,” said Rudolph. “We were in really good contention, had the best car. Tonight maybe not the best car, but never the less we were able to park it here in Victory Lane.”

The two drivers that were behind him for much of the race were Zeiner and at other points Tim Buckwalter. On the final lap it was Zeiner digging deep for the win as he looked for his first Atlantic City checkered flag. Rudolph did what he could to prepare himself for the inevitable challenge on the final lap.

“I felt him there for better half of the race,” stated Rudolph about Zeiner. “At the end of the race I tried adjusting my line, adjusting things in the car. It helped a little bit, but still I don’t think I had the fastest car at the end.

“You know the last couple laps they are going to give it their all, no one is here for second. I was just doing my best to park it here in Victory Lane.”

Rudolph set up his run to the checkers early in the night when he captured the five lap dash. He made some impressive moves to get to the front after starting mid-pack. From that point forward it was just a matter of keeping his car out in front.

“I went into to the dash, I didn’t have a plan to get in the lead or whatever, but I knew if I had an opportunity to get the lead for the start of the race that it was going to be in my best interest,” commented Rudolph.

The only scare for Rudolph came when he nearly got into the slower car of Earl Paules. Paules had something break on his No. 8 and Rudolph took evasive action entering turn three to avoid hard contact with him.

“With a little bit bigger of a track than in Allentown we didn’t have a constant lapped traffic problem, but there were a few lapped cars,” cited Rudolph. “You are coming up on them so fast that you don’t even know what to do. I got to him (Paules). I didn’t know where to go all of a sudden. Like I said, I closed in on him on the straightaway and then in the corner all of a sudden he’s there.”

Rudolph win came in his potent Lafler Chassis No. 22. It continued the run of dominance by the chassis manufacturer in indoor action. Lafler built cars swept the 2016-17 indoor racing season.

“It’s really turned into a Mark Lafler Chassis phenomenon here where continuously he’s got the cars to beat,” said Rudolph. “I’m really happy for myself, but I’m more happy for Mark (Lafler) because he’s the one that puts in all the effort. The guys put in all the effort then I go out for 40-laps and do my effort. That is totally minimal to the hours they spend in the shop trying to get us wins like this.”

Zeiner did it all.  There wasn’t anything more he could have done in the final lap to get by Rudolph. He got the run at the right time. Unfortunately he came up centimeters short at the finish. He and his team had nothing to hang their heads about.

“Without a doubt everything went our way,” commented Zeiner. “Yeah we came up a little short but I’m proud of all these guys and the car they gave me. We drove a smart race.  I screwed up the one time and hit the tires. I told myself to just hit my marks and go after him again and that’s what we did. We are real pleased, a little upset, but I know we got a great car that we can come back next year hard.”

Indoor racing is almost always a contact sport. Zeiner used some contact on the final lap to try and make the pass. It was nothing dirty or enough to wreck Rudolph. It was a small tap in the bumper as he got loose to open the door for Zeiner to try and sneak underneath. It was good hard racing between two veteran indoor racers.

“That’s what I told him afterward,” Zeiner said. “We raced hard. I didn’t move him. I just freed you up there. He was doing what he had to do going in straight. Even if I went in there hard to move him he had it blocked up. I just caught him at right angle. He got on gas real hard and got his car sideways. We had the drive off, but still a little shy. That was awesome.”

Gambler Globs
Rudolph noted the success of car owner Mark Lafler in the indoor series. Six of the top nine cars locked in the show were Lafler’s while of the six qualifiers run, five were won by Lafler cars. By my count, 16 Lafler cars were in the starting grid for the 40-lap feature event…

Chad Jones was the only flip victim of the afternoon. Jones got upside down early in the first B-Main event…

Timmy Catalano came from the tail to win B-Main three after contact with Bob Baker sent him spinning late while leading. He took advantage of a couple of restarts to power his way back to the lead and the win…

Ted Christopher was running inside the top five when he clipped an implement tire breaking the left front on his Trey Hoddick owned car. He was carted off finishing 20th…

Anthony Sesely’s bid for another Gambler’s Classic went by the wayside on lap 24 when he was sent to the pits with fluid dripping from his No. 16…

With 35 laps complete, Tim Buckwalter exited the track giving up a top five position in the running order.