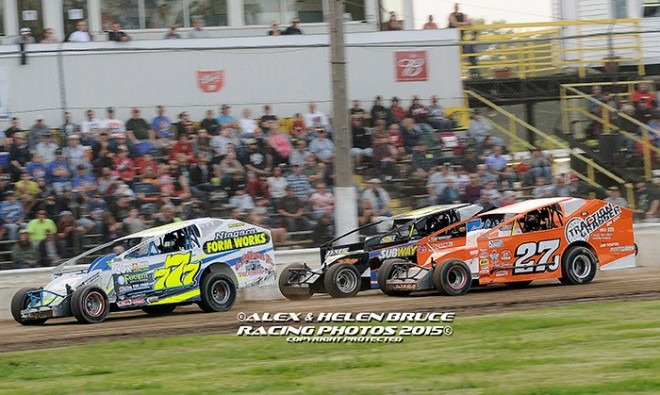 If you are looking for a special way to entertain your family, friends, co-workers, and more, I have a suggestion for you, spend a night at the races and enjoy a night of racing action from a VIP Suite at the Ransomville Speedway. Sponsoring a night of racing at Ransomville is a great opportunity to call a night your own at the track. Race night sponsorship and VIP Tower hospitality packages are available for nights throughout the 2017 season. Ransomville can drive brand awareness for your business through race-night sponsorships, nights in the VIP Tower, on-track signage, greetings on the PA system, Jumbotron advertising, as well as having your logo on the Ransomville Speedway website and social media pages. To become a corporate partner of Ransomville Speedway, contact General Manager Jenn Martin at (716) 791-3602.

The first racing action of the 2017 season at Ransomville will be the Hangover 150, scheduled for this coming Saturday February 4th. Already postponed twice due to Mother Nature, fingers are crossed to finally get the Hangover in the books so the 2017 season can officially be underway. Pit gates will swing open at 8:30am with grandstands opening at 10:30am with the first green flag of the day at noon. The 2017 edition of the Hangover 150 is presented by Philips Garage, Relco Trucking, Sevenson’s, Hytech and FindItQuick.com Winners of each race will receive $500 with $200 going to second place and third place earning $100.

As some Ransomville regulars will compete in the Hangover 150, some have competed indoors with their TQ Midgets as part of the Indoor Auto Racing Championship. Erick Rudolph won the Gamblers Classic in Atlantic City for a third time in his career, driving a Lafler Chassis #22. Sportsman rookie Jonathan Reid finished seventh in Atlantic City driving his Harry Macy Special, Reid’s Drive-In number 9. Some drivers that have competed over the years at Ransomville also ran down in Atlantic City including second generation driver Andy Jankowiak, who dabbled in a Sportsman at the Big R on a couple of occasions the last couple of years finished 18th after having issues in his newly built TQ midget along side asphalt modified chassis builder Ricky Kluth. “The Straight Shooter” Scott Kreutter started 25th and finished sixth, earning the Hard Charger Award. Mike Maresca, who would come to Ransomville for the big-paying races or the Super DIRTcar Series stops, finished 13th.

Ransomville hosted its rules/registration meeting at the Ransomville Fire Hall on January 21st with an estimated 200 people in attendance. Technical Inspectors Rich Lemieux and Dave Johnson were introduced to the attendees as well as other key Speedway officials; Promoter/General Manager Jenn Martin and Parm Atwal were all in attendance.

Third generation driver Erick Rudolph will be campaigning at the Big R with the BBL team. Scott Kerwin, who was the driver of the BBL entry, has found a ride with John Cocco. Former track champion, “CB3”, Chad Brachmann will also be back at Ransomville in weekly competition. Moving up into the Modifieds from the Sportsman ranks are past Sportsman titlist Jesse Cotriss and Steve Lewis Jr. Both Cotriss and Lewis Jr will be going for the division’s Rookie of the Year honors. Notable 358 Modifieds drivers that signed up after the meeting include multi-time track champion “Mr Small Block” Pete Bicknell, defending track champion “The Ransomville Renegade” Ryan Susice, Phil Vigneri Jr and Phil Vigneri III, Kenny Wills, Allan Wills, Ricky Richner, Nick Joy, Scott George, Jim and Russ Zimmerman, “The Professor” John Smith and Jeff McGinnis.

Pete and Jake Stefanski plan on running a full season in the Street Stock ranks and is joined by veteran Ken Camidge, along with Joey Zimmerman, Randy Zimmerman, “Showtime” Jaren Israel, Scott Soos, Austin Hauser, Donald Hermanson, Roger Israel, Matt Tracey, Ryan Hoolihan, Brian Monahan, Brandon Sherwood and Chris Dziomba. They will be joined by divisional rookie Jordan Moden who is moving up from the Go-Kart ranks. Mike Kramarz and Patrick Okeefe are moving up from the 4-Bangers to the Street Stocks. Dan Korpanty, and Roger Smith are also joining the rookie class of Street Stock campaigners.

Ashley Harbison, Howard Guthrie, Steve Matson, Anthony Guthrie, Zachary Adams, Chris Leone, Drew Westmoreland, Cole Susice, Brendan Okeefe and Kyle Doty so far have registered to run in the 4-Banger division. Look for this 4 cylinder division to be filled up with racers before the Speedway’s annual Test/Tune and Time night in late April.

In the spring, concrete pads will be going down on the front row of the pit area for the 358 Modifieds. Pads can be rented for $300 a season. Car shows are in works and being scheduled as well as being represented and attending the 31st Annual Motorsports Expo, held the weekend of March 11th and 12th at the Center of Progress Building on the State Fairgrounds in Syracuse.