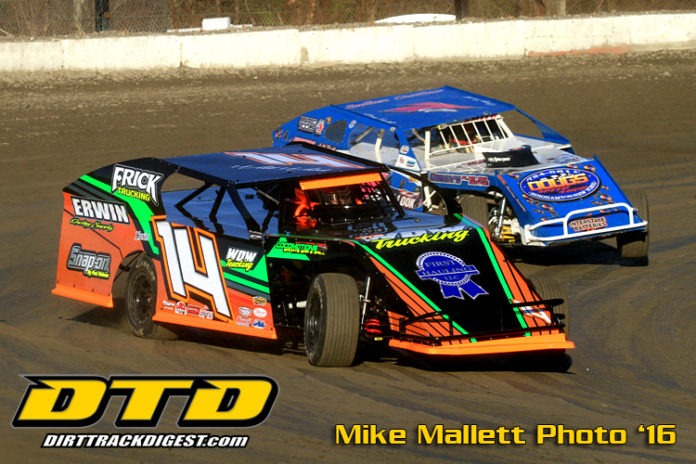 To say that Will Ward, III of Cobleskill had a good year last season would be an understatement. Ward ended his 2016 season with a total 12 wins in the IMCA Modified division, the track championship at Skyline Speedway in Cortland, NY and the NYS IMCA (International Motor Contest Association) Championship. Ward claimed two wins at his regular Friday night track, I-88 in Afton, NY and eight wins at his regular Saturday night track, Skyline Raceway. He began the season by winning the Thursday night May 12th opening event at Outlaw Speedway in Dundee, NY and then in July also picked up the checker in the special Little Mike’s Race to Win at Five Mile Point Speedway in Kirkwood, NY. All in all Ward raced in 50 different races this past season including the IMCA Super Nationals at Boone, IA. The NYS IMCA Championship came with a trip to Lincoln, NE in November where he was on stage to receive his accolades and trophy at the annual IMCA awards banquet with all the other champions. Ward also finished fourth in overall points in the Eastern Region for IMCA. The region includes tracks from Michigan to Maine.

Will attributes his great improvement the past two seasons to Larry Shaw Race Cars and the people in the Erwin Racing shop in Beaver Dam, Virginia. “They have been tremendous to work with,” said Will.

In October Will married his wife Elizabeth who is also his main crew member on the team including changing tires on race nights. He thanks Elizabeth for all her help and also his many sponsors that include WDW Trucking (his parents), Frick Hauling, Erwin Racing Supplies, Locomotions and Snap On Tools. Looking to the 2017 season, Will Ward will take his racing much closer to home on Friday nights as Glen Ridge now has the IMCA sanction. Ward is thrilled to be racing only 20 minutes from home one night a week. On Saturday this season Ward will travel to Thunder Mountain Speedway in Center Lisle, NY. These changes came when I-88 changed hands over the winter and will no longer run IMCA Modifieds on Friday; Skyline switched it’s race night from Saturday to Friday thus giving Glen Ridge the chance at the national sanction.

Bob Vedder begins his 51st year in racing with a new sponsor, Steve Meyer’s Construction of Schoharie will come on board this year and will add to Bob’s already dedicated sponsors that have been with him for many years, Fred’s Sanitation, Terrace Mountain Auto Repair, A&M Towing, Schoharie County Spring Shop, On Demand-Handyman, Paisano’s Pizza and Feelin Country, country band.

Bob will race his 2016 Bicknell chassis modified at Glen Ridge again this season and occasionally at Fonda. “I always try to make the Jack Johnson Tribute night,” said Vedder. Bob’s ever popular annual party and dance will be held at the Quality Inn in Schoharie on March 10th. More information to come as soon as it’s finalized.